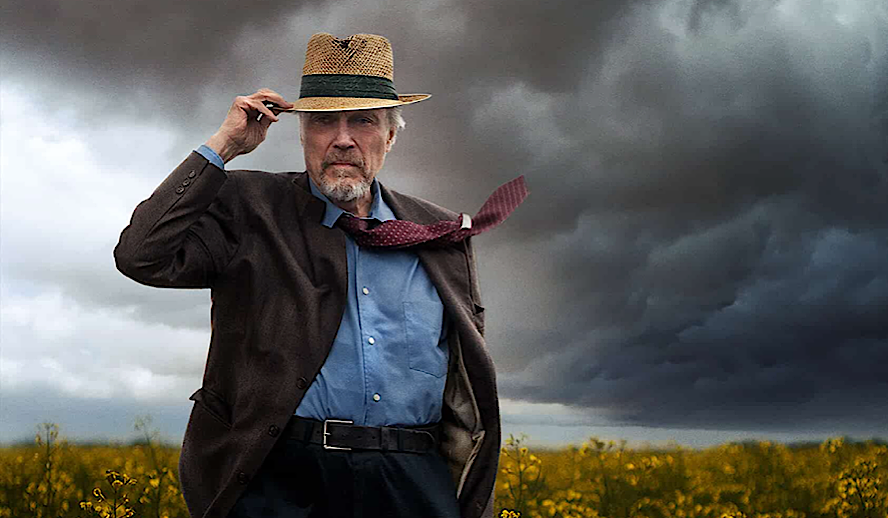 ‘Percy Vs Goliath’ is a live adaptation of the true story of a court case involving a small-town farmer and the giant GMO company, Monsanto. It revolves around Percy Schmeiser, played by Academy Award winner Christopher Walken. Roberta Maxwell (‘Brokeback Mountain’) plays his wife and brings a lot of heart to this movie. The acclaimed actors, Walken and Maxwell, are the ones who truly make this movie a success. However, the formal elements and the inspiration from real life helps elevate this movie. While ‘Percy Vs Goliath’ is a good movie on paper, it is lifted to another level because of its lighting, its actors, and the true story it’s written about.

‘Percy Vs Goliath’ utilizes dark, moody lighting typical of drama films throughout the movie. Hard light is used to create a distinct line across the face, splitting the face (usually in the middle) into two parts. One side is more naturalistic while the other is covered in shadows. Luckily, ‘Percy Vs Goliath’ uses this technique sparingly, making every usage stand out. The majority of the light seen in ‘Percy Vs Goliath’ is soft lighting, but still creates dark shadows on one side of the light. It’s a moody, dramatic film and the lighting reflects that.

As well as more technical aspects, ‘Percy Vs Goliath’ uses lighting in a symbolic way. Percy often walks out of darkness into light, symbolizing change. Another possible explanation for this is a loss of innocence or the gaining of knowledge. ‘Percy Vs Goliath’ takes a small-town farmer and throws him into the global spotlight. His entire life changes and the perspective he had on his world also changes. Percy’s world expands and while with a new world comes new dangers, it also comes with new responsibilities. He realizes his role on Earth is bigger than just minding his business and keeping his farm afloat. The immaculate lighting in this film reflects that.

One of the biggest highlights of this movie is its protagonist, Christopher Walken as he is one of the biggest Hollywood greats with his career dating back to the 1950s. In total, his films have grossed over $1 billion dollars and he has starred in a variety of roles from action films to dramas. Part of his success is also due to his theatre work, specifically his work in Shakespearean plays. In his free time, he also guest-stars on the comedy sketch ‘Saturday Night Live’. For his work on the show, he even earned a Primetime Emmy Nomination.

Walken started his career as an extra on television before beginning to transition to acting full-time. He scored his first regular role in 1953 and from there guest-starred on a number of television series. As well as that, he started to perform on Broadway and started his famous work in Shakespearean plays. It wasn’t until 1971 that Walken made his feature film debut opposite Sean Connery. From there, the rest was history as they say. Only seven years after his feature film debut, Walken won the Academy Award for Best Supporting Actor.

After this success, his career skyrocketed and he became a man of high demand. 1980’s ‘Heaven’s Gate’ was the first of his films to be controversial. Because of the bad press surrounding the film, Walken and the rest of the crew and cast were subjected to a lot of negative attention. There were multiple setbacks on ‘Heaven’s Gate’, most notably too many takes and going over budget. As well as that, there were also allegations of animal abuse.

After that, his next major role was in Quentin Tarantino’s ‘True Romance’. He followed up this first movie with another appearance in a Tarantino film. Because of his prolific career and his great acting, he’s become known for diverse and eccentric roles. One of his motifs is also portraying real people in different films. Widely known as “The King of Cameos”, Walken is also known for appearing in many different series and films. He’s worked with a variety of A-list actors and directors because of the quality of his work. Without a doubt, ‘Percy Vs Goliath’ benefitted highly from Walken’s input and his role.

The biggest selling point of ‘Percy Vs Goliath’ is how it’s based on a true story. The film adaptation of this true case of Monsanto versus Schmeiser breathes new life into this older story. Although it does retell this story, the director, Clark Johnson, takes a clear stand of which side he’s on. While the case was not as cut and dry as Johnson makes it seem, it did cause a lot of controversies. Monsanto, a GMO company recently acquired by Bayer, has been involved in many different court cases against farmers, specifically as a defendant. They are a controversial company, depending on who you ask, and it’s partly because of misinformation and partly because of their actions.

For instance, since Monsanto was under fire a lot, it created a fairly widespread distrust and dislike. Whether people believed that GMOs were dangerous or not was another story, but their reputation disinterested many consumers. There was over a decade where they had multiple court cases back-to-back causing a huge loss of money. In general, Monsanto’s acquisition by Bayer is seen as a good thing since the company dissolved and their reputation no longer hangs over them.

‘Percy Vs Goliath’ is also monumental because of Walken’s role in it. At the age of 78, he has begun to pick his jobs much more meticulously since he’s at a place where he can comfortably say “no” to roles. He doesn’t need to take everything that’s handed to him, which means ‘Percy Vs Goliath’ spoke to him in some way. The movie benefited a lot from Walken’s expertise, both as a general actor and from his experience portraying real people. He copied a lot of Percy’s mannerisms and brought his story to life. He made Percy even more sympathetic and more relatable to audiences who may not have heard of him before. Overall, Walken was definitely the highlight of this movie.

“Percy Vs Goliath’ is now available to stream on platforms like Apple TV, Vudu, and more.