Tim Burton’s ‘Ed Wood’: A Love Letter to the Artist 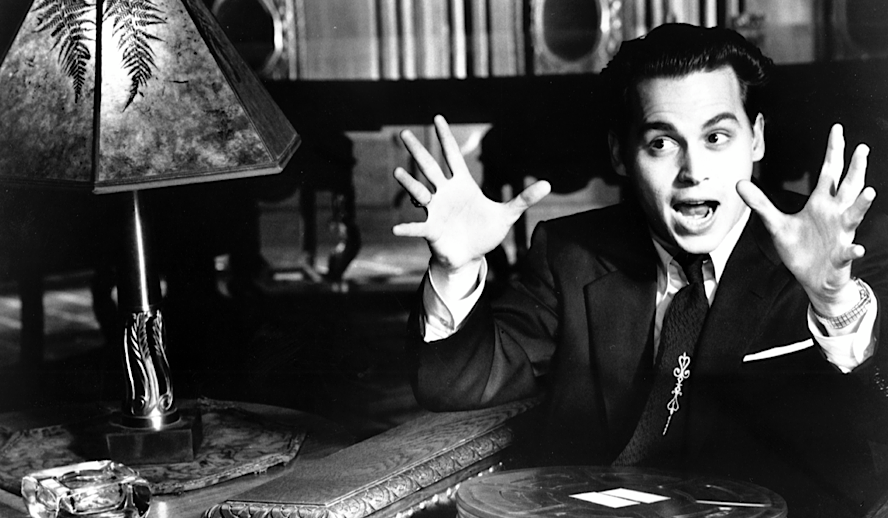 ‘Ed Wood’ could have easily been a mean-spirited film since it follows one of the most infamous movie directors of all time. Like ‘the Disaster Artist’, which follows the notoriously bad film director, Tommy Wiseau, 1994’s ‘Ed Wood’ follows the notoriously bad director of such schlock films like ‘Plan 9 From Outer Space’. Directed by Tim Burton, ‘Ed Wood’ doesn’t mock or satirize the failed film director, but instead portrays him as an endearing yet flawed dreamer. This loving portrayal of an artist is perhaps Tim Burton’s most personal film, since it acts as a love letter to every struggling artist out there.

Following Your Dreams Despite the Road Blocks

Ed Wood (Johnny Depp) is obsessed with the art of moviemaking. He starts out doing grunt work at one of the Hollywood studios, always in awe of the surrounding beauty despite the mistreatment from his supervisors. He doesn’t care though; he is just one step closer to following his dreams. Once Ed Wood gets the funding to direct his own films, the roadblocks begin. Much of the failure of Ed Wood’s films can be attributed to the roadblocks he faced, from low budgets to tight filming schedules. Despite these roadblocks, Ed Wood always kept the same positive spirit.

In one of the funniest scenes in the film, the team realize that they don’t have a motor for their prop octopus while filming ‘Bride of the Monster’. This means that the famed actor, Bela Lugosi (Martin Landau), has to wrestle with the octopus, shaking its tentacles around, in order to make it look like he is being attacked. Ed Wood doesn’t give up but instead comes up with an alternative (a campy alternative but still an alternative). These cheap solutions are seen throughout the film, from Ed using tin foil pans as flying saucers to always using the first take to save time. While it could be easy to assume that Ed did all of this out of laziness or a lack of caring, the film shows that these were all just solutions to the roadblocks that every artist has to face.

At one point in the film, Ed goes to the bar after a stressful day on set and runs into Orson Welles (Vincent D’Onofrio), who is at the time struggling to get the funding for his unfinished ‘Don Quixote’ film. The two talk about the roadblocks they face, from funding to annoying producers, and Orson tells Ed that “visions are worth fighting for”. While this never happened in real life (Ed never ran into Welles at a bar while wearing women’s clothes), the scene is one of the most poetic in the film.

Two different artists, one who is considered the greatest director and one who is considered the worst, relate to one another about the roadblocks they always face. It shows that every artist goes through the same problems despite how established they are. While this is a comforting message for any artist to hear, the scene also ends in a rallying cry, that every vision is worth fighting for. While showing the hardships that artists face can seem dire and gloomy, the scene wants the artist to know that their visions have value and that the roadblocks are worth overcoming.

‘Ed Wood’ – Finding Your Tribe Amongst Other Artists

One of the highlights of ‘Ed Wood’ is how the friendship between Ed Wood and Bela Lugosi is portrayed. Ed Wood is the young newbie of Hollywood, the one who has big dreams while Bela Lugosi is the older and bitter expert of Hollywood, the one who has succeeded in his dreams but is now “washed out”. The two are in very different phases of their lives but begin to work together, Ed living out his dream of working with his childhood hero and Bela getting to finally make movies after a four-year hiatus. The two work together in order to achieve their dreams of making movies and thus become friends in the process thanks to their shared love of film.

Ed Wood has his own batch of weirdos and friends that work on his films with him. Of his friends, there’s John “Bunny” (Bill Murray), a depressed drag queen, Tor Johnson (George “The Animal” Steele), a professional wrestler, and Vampira (Lisa Marie), a goth horror film host. All of Ed’s friends are outsiders for one reason or another, even Ed himself is an outsider due to the fact that he enjoys wearing women’s clothing. Ed’s films are a vehicle for him and his friends to express themselves and have fun with their art. Ed’s friends are loyal to him and will do anything to help make his visions happen, like get baptized. This shows the reality of many artists, especially those that are seen as outsiders, in that they stick together and form their own found family. A found family that helps one another with their art and a found family that “stays weird” together.

Not everyone understands Ed and his friends. In one scene of the film, the group has a wrap party and Ed performs a dance number in drag. While all his friends cheer and support the show, his girlfriend, Dolores (Sarah Jessica Parker), snaps, saying “you people are insane, you’re wasting your life making shit, nobody cares. These movies are terrible”.

Dolores acts as the person that every artist deals with in their life, someone who is close to them who doesn’t understand why they’re an artist and doesn’t like the art itself. Ed and Dolores break up and he soon meets Kathy (Patricia Arquette), a woman who supports not only his movies but his “cross-dressing”. She fits into the group of weirdos and even loves Ed for his weirdness. This shows a hopeful picture that the artist will eventually cut out the toxic people in their life and “find their tribe”, the fellow weirdos and artists who will work with them and support their visions.

‘Ed Wood’ is Tim Burton’s most personal and beautiful film, acting as a love letter to the work of Ed Wood and acting as a love letter to every artist out there. The film shows the importance of keeping your visions alive despite the roadblocks that will come in your way along with the importance of keeping a positive attitude during every twist and turn. The film also shows the beauty of an artist “finding their tribe”, working with their fellow weirdos, and supporting one another. It could have been so easy for ‘Ed Wood’ to be a mean-spirited satire about how cheap films were in the nineteen fifties but Tim Burton has too much love for the art of film and of Ed Wood to punch down. Tim Burton’s ‘Ed Wood’ could have been a basic biopic but it is instead an inspirational and passionate portrayal of the struggling artist.

‘Ed Wood’ is available to stream on Tubi.