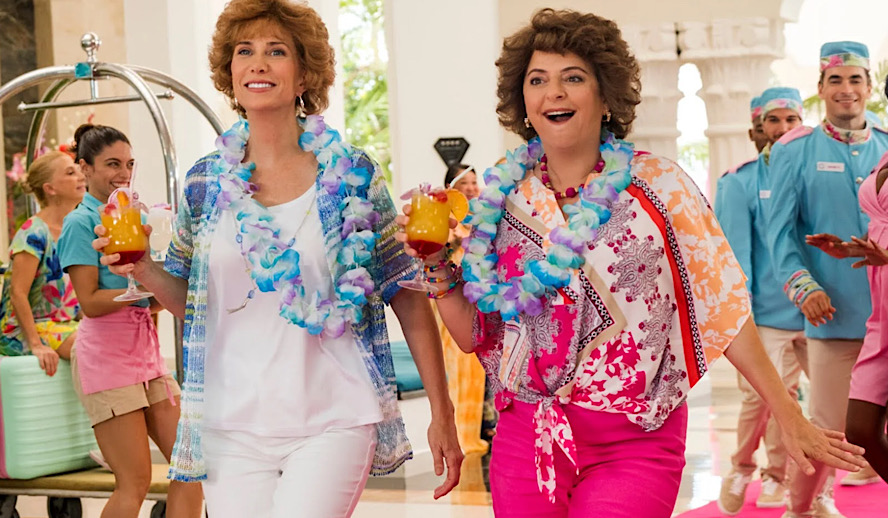 Not two days ago did I have a conversation about the lack of comedy in the entertainment industry today. Sure, writers still chase funny, almost every movie still has a token laugh or two, but rarely do they base their films around a comedic situation and nothing else. We live in a revitalizing horror renaissance, the year of the coming of age, and nothing holds more power than a drama film done the right way. However, comedy has been effectively cut off from Hollywood.

Related article: The Final Installment of Lara Jean Covey’s Story: ‘To All the Boys: Always and Forever’ = Personal Growth and Family Culture

Barb and Star Take the Audience to Vista Del Mar

You know them from their first hit film ‘Bridesmaids’, or maybe from their work in the iconic improv troupe The Groundlings. Kristen Wiig and Annie Mumolo have sown their seeds so that  hilarity would bloom in all of the right places, and ‘Barb and Star Go to Vista Del Mar’ is not only a fruitful product of their work but a well-earned, self-indulgent stab into the unknown. Barb and Star are two best friends living in Soft Rock, Nebraska when their life unexpectedly comes to a halting stop. Without their jobs or a group of friends to support them, they decide to leave their kitschy hometown and venture to the middle-aged capital of the world; Vista Del Mar, Florida. Once there, they fall into a land of beach-themed adventure, perilous romance, and the deadly plot of the criminal mastermind Sharon Gordon Fisherman. Two midwestern ladies and their culottes have never been more equipped to save a tourist’s paradise.

Outlandish Comedy At Its Very Peak

Possibly the most successful element of this film is how truly bizarre it is. No one could have predicted the culminating events of the plot, not even from the ominous first trailer that was released, which did not show Mumolo or Wiig’s faces as to not “give anything away”. However, ‘bizarre’ is not derogatory. In fact, ‘Barb and Star Go to Vista Del Mar’ might be one of the very few films in history to successfully follow a loose plot by relying heavily on the dialogue and character interactions. Not once did this film drag by and you won’t find yourself checking to see how long is left, but instead Wiig and Mumolo continue to deliver more sequentially offbeat performances that will keep your attention rapt.

The plot of this film is almost child-like in quality; a supervillain conspires to demolish the small town where she was once ridiculed only to be stopped by our likable main characters, fueled by their newly-inspired confidence. With its PG-13 rating, it’s true that a younger audience can join in on the fun of ‘Barb and Star Go to Vista Del Mar’, but the sophisticated humor masked as hip-check comedy might fly over the heads of newer generations. Many of the jokes are a play on an earlier time of comedy, where misdirection was new and exciting, and the audience is fooled into believing in the same jokes we’ve fallen for hundreds of times. Iconic stock humor, such as a character saying “What the fu-” to only be cut off by the changing scene, are utilized to their full potential in such a way that you won’t be able to hold back your laughter.

The Cast That Needs No Introduction

You’d have to live under a rock to not recognize this cast of characters- Annie Mumolo, star of ‘Bridesmaids’ and ‘Afternoon Delight’, plays the innocuous Barb (it’s not short for anything, just Barb) who is fearful of adventure after her husband’s passing. She’s perfectly happy in her small-town life that she shares with her best friend, Star (short for Starbra). Kristen Wiig, ex-SNL cast member and ‘The Secret Life of Walter Mitty’ start, plays the experience-seeking Star who convinces Barb to travel to Vista Del Mar. Wiig also doubles as the revenge-seeking Sharon Gordon Fisherman, creating such an excellent divide between her two characters that I spent half of the movie convincing myself it was her. Together, Mumolo and Wiig create a seamless duo that sell every second of their screen time. Unlike a usual film, the audience does not have to buy into the history between two actors that does not exist- these women have an epochal friendship that shines with every second they spend together.

Jamie Dornan is the love-fooled Edgar Paget, a surprising- yet welcome- comedic performance to contrast his past fame from the ‘Fifty Shades of Grey’ franchise and his stern main character, Christian Grey. Dornan really runs with the ridiculous nature of this film and brings out a different side in the expected performance of a male romantic interest, complete with a rousing musical number and an impressive array of dance moves. Other notable performances are the young Reyn Doi as Yoyo, hilariously aiding Sharon Gordon Fisherman in her evil quest, Damon Wayans Jr. as Darlie Bunkle, the spy who accidentally continues to give too much information away, and a surprise appearance from SNL cast member Vanessa Bayer as the uptight president of ‘Talking Club’.

‘Barb and Star Go to Vista Del Mar’ Will Be Remembered

‘Barb and Star Go to Vista Del Mar’ is history in the making. Comedy is a narrow, hit-or-miss field that many can trip and fail on, but a film such as this is sure to be remembered for years to come. It is really something special when two comedians as prominent as Annie Mumolo and Kristen Wiig still continue to produce comedy as sophisticated and enjoyable as this. It’s so unfortunately common for writers to fall into a niche hole that they are unable to climb back out of, eventually succumbing to the monotony of their work, but Mumolo and Wiig have escaped this cruel fate. Even if it takes another ten years for their next film, the world can appreciate the refined sense of a comedy written by the unstoppable pair.

‘Barb and Star Go to Vista Del Mar’ is now available to rent wherever you digitally purchase movies.