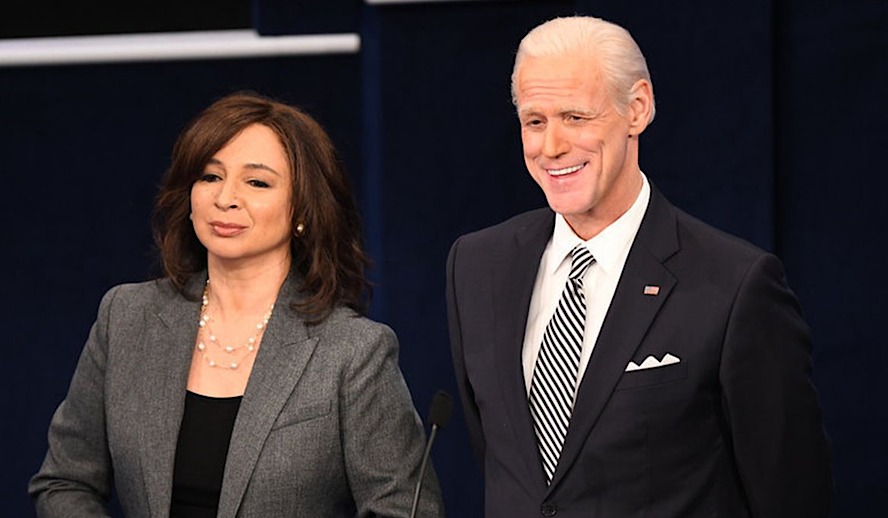 Saturday Night Live 46th Season Premiere: Chris Rock hosted, and Megan Thee Stallion was the musical guest of SNL’s season 46 premiere, under circumstances the show has never seen before in its 45 years on the air. This is their first live show following the pandemic, ending their last season off with an at-home version of SNL. Sonic the Hedgehog superstar Jim Carrey debuted his appearance as Democratic Presidential nominee Joe Biden hilariously in a way that hasn’t been done before, bringing his well-known and beloved physical comedy to the impersonation. Alongside him was Maya Rudolph, returning as Kamala Harris. With the cold open and opening monologue, the cast and host took aim at the infamous presidential debate, President Trump’s  COVID-19 diagnosis, and the current social climate. Alec Baldwin returned with his famous Donald Trump impersonation, with the SNL writers showcasing Trump’s constant interruptions during the debates. Chris Rock’s monologue consisted of excellent one-liner jokes, commentary on relationships, the government, and coronavirus, with blunt opinions that were met with applause by the audience. It was certainly a heavily anticipated episode, which is why it was the most viewed season premiere in four years, behind the 2016 season premiere.

The rest of the episode is seasoned with hysterically funny sketches, many non-political, but still topical.  The opening sketch was their long-running, always funny Action News sketch in which a reporter interviews peculiar people under peculiar circumstances. The first sketch stars were: Heidi Gardner, Mikey Day, Ego Nwodim, new cast member Lauren Holt, Chris Rock, Pete Davidson, Beck Bennett, and Kenan Thompson and they delivered incredible performances with endless laughs, re-instilling the joy and love that SNL fans of all ages have waited all summer for. The cast showcases their greatest talents, such as; Chris Redd leading a rap with fellow castmates and musical guest Megan Thee Stallion, Chloe Fineman impersonating multiple people, even doing magnificent spot-on impressions of Drew Barrymore, Reese Witherspoon, and Nicole Kidman while they talked with one another. Kyle Mooney, Chris Rock, and Beck Bennett lead the following sketch, appealing to their numerous fans since their GoodNeighborStuff days and millions who have praised them as favorites on the show. Colin Jost and Michael Che had a lot to say on Weekend Update, with every joke strong and met with huge laughs from the audience. Overall, the cast and crew were on the A-game, as they should be for one of the craziest years in history.

The cast and crew visibly were taking precautionary measures in relation to coronavirus, with face masks and shields on everyone except for the cast members while they performed. Even as the cast gathered on stage in the end they wore masks. The audience consisted of a very small handful of half healthcare workers and frontline workers, and different people that signed up for SNL’s lottery, all in masks. The SNL Instagram page showed the cast and crews incessant safety measures taken throughout the entire week, with spaced out tables for their weekly writers’ meetings, mask enforcements everywhere, and limited gatherings of people. Chris Rock even joked “I haven’t had this much stuff up my nose since I shared a dressing room with Chris Farley.” These proactive measures, which NBC successfully tested with The Tonight Show with Jimmy Fallon and Late Night with Seth Meyers, have shed new light on the future of not only live productions, but productions in general, as Hollywood and comedians have taken action on ways to get around coronavirus risks.

As the Nielson ratings showed, SNL is still very much at the core of the American mainframe, a staple of powerful comedic perspectives on topical events. Though the show delivers huge laughs, with some of the United States’ greatest comedians in the cast and writing staff, they also provide topical commentary and can be clearly seen as a reflection of society during the time the show aired. New cast members, Andrew Dismukes, Lauren Holt, and Punkie Johnson shined during the episode, with Lauren Holt appearing in the first sketch, along with Andrew Dismukes and Punkie Johnson playing side characters throughout the show, as new featured players typically start off doing.

The producers at SNL have a history of attracting talent from institutions like The Groundlings, Upright Citizens Brigade, The Second City,  and video creators online, which is how they discovered their newest talent as well. With alumni consisting of big names such as Tina Fey, Will Ferrell, The Lonely Island, and Eddie Murphy,  there’s a lot of expectations of SNL’s quality, yet they consistently deliver with each year. No other show can comedically tackle such big hot issues like SNL can, which more so parody’s the absurdity of people, culture, and media than creates content from scratch.

Megan Thee Stallion took aim at some political issues during her performance as well. During her performance of “Savage,” which was the No. 1 Billboard charts song for 28 weeks, she targeted  Kentucky Attorney General Daniel Cameron, who led the  Breonna Taylor case. This isn’t the first time a musician has spoken out against political or social issues during a performance on SNL, one of the most well known being Sinead O’ Conner’s ripping up of a picture of Pope John Paul II to protest the Catholic Church’s sexual abuse of children. Megan Thee Stallion’s second performance of “Don’t Stop,” held the same design, lighting, and choreography quality as the first performance, but nothing related to politics or society.

Young Thug made a surprise appearance and did an excellent job rapping alongside her. Both of Megan Thee Stallion’s performances were visual spectacles, with beautiful lighting and set design, choreography, costume designs, and excellent musical performance. Megan Thee Stallion shows she’s a powerful personality with a lot to say, and her artistic genius bleeds through her elaborate and well-crafted performance. This is the kind of material that comes out of SNL, and it’s really the only place that provides that platform to do so on such a large scale.

With five more shows in a row leading up to the November election, SNL plans to lend its powerful voice to one of the most bizarre times in American history, which many people are very pleased with. They have a strong upcoming host list, with big names such as; Bill Burr and Morgan Wallen on October 10th, and Issa Rae and Justin Bieber on October 17th. With such a largely watched premiere and a strong history of delivering significant and relevant content, this next season of SNL is one you’re not going to want to miss. They’re taking on some of the craziest topics to happen in modern history and may shake out one of their greatest seasons to date. Saturday Night Live can be watched on Saturdays at 11:30 PM on NBC.