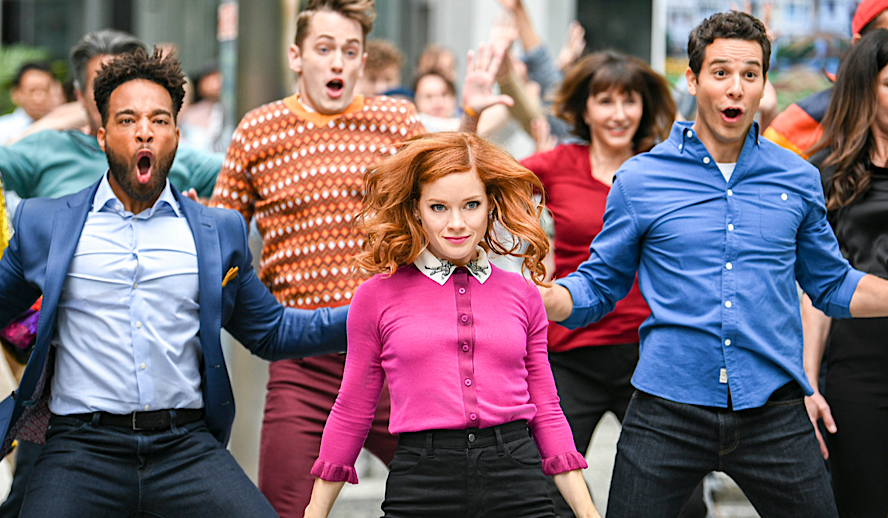 American poet Henry Wadsworth Longfellow once said “Music is the universal language of mankind.” Music allows people to express all kinds of emotions in a way that others can relate to and present universal themes. The show ‘Zoey’s Extraordinary Playlist’ makes this very idea the central theme to their story.

The show focuses on software developer Zoey Clarke (Golden Globe nominee Jane Levy) and her recent discovery of being able to hear people’s innermost thoughts through song while dealing with work drama, family struggles, and her love life. The use of music in the show allows it to portray real-life struggles in a way that can be universally understood, whether it’s depression, grief, relationships, racism, and more along with being one of the most inclusive and diverse shows on broadcast television right now.

Related article: These Four Shows Are Some Of The Longest-Running Primetime Shows Of All Time- And Still Airing!

What creates the central plot points to ‘Zoey’s Extraordinary Playlist’ are what they call “heart songs”, songs that express the inner thoughts and feelings of characters. Each episode usually features four of these songs that only Zoey can hear, giving her direction for what she needs to do or who she needs to help in a given situation. These songs show her the mental health struggles, relationship feelings, and ambitions of the people around her and sometimes bring her closer to them while other times creating a wedge between them.

In the first season of the show, these heart songs are what allows her to communicate best with her dad, played by Peter Gallagher, who is suffering from a disease that has taken away his mobility, speech capabilities, and shrunk his lifespan exponentially. She can hear him express his feelings and needs through song and is better able to help him because of it. These heart songs put her in the center of a love triangle between her best friend, Max (Skylar Astin), and a new coworker, Simon (John Clarence Stewart), help her become friends with her next-door neighbor, Mo (Alex Newell), and assist her mom (Mary Steenburgen), brother (Andrew Leeds), sister-in-law (Alice Lee), boss (Lauren Graham), and others.

The idea of using music in this kind of story came from show creator Austin Winsberg trying to process his dad’s illness and death, with him saying, “I didn’t know how much he was processing, what he was processing, especially the last six months that he was alive. And then I started thinking, well, what if during that time he was able to see the world as big musical numbers? What if that’s what was going on in his head?… I had been living in this musical space and the idea of my dad seeing the world as musical numbers made me smile. It gave me some hope.”

He also explained the process of selecting each of the heart songs, saying, “I’m constantly thinking about songs, and what songs function in some sort of story or narrative or emotional way… I always had three rules with songs in the show — and these rules extend back to my musical theater days and musical theater past — songs either need to advance story, reveal character or be funny — or some combination of the three. I never wanted to just put a song in the show for a song’s sake. The song always had to check one of those boxes, and that was kind of our gut check to ourselves to make sure that we’re really living in musical terms, that songs aren’t just there to be a song moment, but that they’re actually informing something instead.”

The whole point of using music to fuel Zoey’s story and growth is because music allows us to hear a story or idea we may not have ever considered or shares an experience we may never go through and creates a way for us to empathize and understand another person’s worldview. From early on in the first season the heart songs dealt with themes of depression, sexuality, and acceptance, ending relationships, entering relationships, and working through problems as a couple, and grief, all of these even culminating into the final song of the first season impressively done in a single shot.

One of the things using music does to share realistic experiences is provide for a unique way to have discussions about representation on television. From the jump, four of the series regulars are BIPOC which allowed the show to create a really dynamic and intricate episode about racism in the tech industry in the wake of the Black Lives Matter protests this summer.

John Clarence Stewart said about this episode and discussion, “ I don’t want to be attached to a version of this that is not as honest and vulnerable as we can get,’ and he was absolutely on board and didn’t want to shy away from it and, throughout the process, kept fighting for that level of authenticity… So we have a white woman moving through all of these moments, and there are these Black and brown bodies that she’s in contact with and has relationships with and has had relationships with throughout the history of the show, and each of these Black and brown bodies are confronting her about allyship and the blindspot she has. My desire was for everything to be earned, for her to be flawed and to mess up, and to be called on things”

The show has also been very inclusive in its portrayal of those with disabilities. Zoey’s father in the show has progressive supranuclear palsy (PSP), which means he is unable to speak or have very much mobility. However, that did not mean he was treated as being incapable of being able to express himself or show his feelings. He was shown as having ways he could communicate and speak with his family even if he could not really move his mouth and through heart songs could share what he was feeling with Zoey.

‘Zoey’s Extraordinary Playlist’ also incorporated performances using only American Sign Language to tell show the feelings of a deaf character in one of the most powerful performances of the first season to show that just because we may perceive something as being a limitation does not mean that someone with that limitation is capable of less.

Inclusivity On And Off-Screen

One of the most impressive elements of ‘Zoey’s Extraordinary Playlist’ is the diversity the show fosters on and off-screen. As mentioned before, four of the series regulars are BIPOC who get regular screen time and deeper stories than just being the designated diversity characters on the show. That is in part because the show has made sure to have diversity behind the scenes, not just in front of the camera.

Related article: ‘The Falcon And The Winter Soldier’ – The Hero’s Shadow Looms Large – And The MCU Soldiers On

The show has several BIPOC on their writing staff who are there to be more than just the designated writers for Black stories (something that happens on many broadcast television series) and they utilize them to tell all their stories. When it came to writing their episode on racism in the tech industry, they placed their crew members best suited to tell that story in the driver’s seat (namely writer Zora Bikangaga, director Anya Adams, and guest choreographer Luther Brown)  and gave them a great deal of creative control over the story and production which lead to one of the best musical numbers the show has done and created one of the best episodes the show has had in its two seasons on NBC.

When it came to creating the episode Bikangaga said, “We started the writers’ room in late June, about three weeks after the global protests sparked by the death of George Floyd, and everything was pretty insane at that time but it was pretty impossible not to talk about it. We were talking about the various reckonings that were happening in tech, entertainment, corporate America, and we felt like a reckoning was due within the world of our show, but how could we personalize that and make it relationship-based [especially] through the lens of a white woman who is learning empathy through her superpower?”

He continued by saying, “As a Black person and a Black writer on this show, it’s something that I think is important- how difficult it is to change a culture and create space for people to have a seat at the table. We felt like there is an aspirational element to it — it is an aspirational show — but we were really careful to think about actual ways, in real-time, a company like this can make a change to create a culture help to alleviate a culture of racism and what steps they need to take to go forward. Companies are going to make mistakes, people are going to make mistakes, and I think that could be interesting to portray on our show [but] I choose hope in this situation. I choose to hope it is going to get better.”

‘Zoey’s Extraordinary Playlist’ returns Sunday, March 28 at 9 P.M. to finish out its second season on NBC.