‘The Staircase’: Colin Firth and Toni Collette Star in HBO Max Crime Drama That is Off to a Pretty Good Start 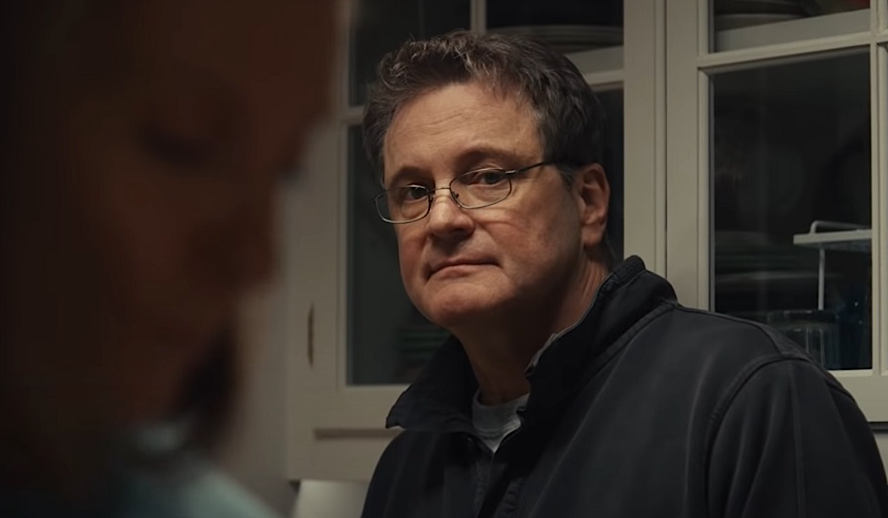 Note: Only the first three episodes of ‘The Staircase’ are out as of this writing, and thus, this review will be based solely on them.

On December 9, 2001, novelist Michael Iver Peterson found his wife Kathleen at the bottom of their staircase, fatally injured. According to Michael, The two were outside, and Kathleen had gone back into the house before he did. However, suspicions arose when several injuries were found on Kathleen that suggested falling down the stairs wasn’t the only thing that led to her death. Michael was accused of murdering her and was arrested shortly afterward. In 2003, a trial was held, with a final verdict of him being guilty. Appeals, pleas, and retrial hearings followed, but nothing definite ever came of the case, and even today, nobody knows for sure if Michael Peterson is innocent or not. Additionally, a French documentary series known as ‘The Staircase’ (or ‘Soupçons’) was made over the course of several years, and was eventually picked up and released by Netflix, where all thirteen episodes can be streamed. The subject of today’s review, however, will be the far more recent biographical HBO Max original series of the same name.

Directed by Antonio Campos, ‘The Staircase’ is a scripted crime drama miniseries starring Colin Firth as Michael Peterson and Toni Collette as Kathleen Peterson. Other cast members include Michael Stuhlbarg, Dane DeHaan, and Olivia DeJonge. The series takes after the aforementioned documentary series and follows not just Michael Peterson himself, but just about everyone involved with the case, from his family, to the officials, to the documentary crew themselves. The show is appropriately dark and psychological, giving us a proper sense of what everyone went through following the incident both physically and mentally.

‘The Staircase’ relays the case in a way that’s compelling and well-directed. The acting is for the most part pretty good, though there were a few less-than-stellar moments that momentarily took me out of it. Colin Firth in particular is excellent as Michael Peterson; giving him a true sense of depth and ambiguity. Going back to the direction, the show is pretty artfully done a lot of the time, and even shots that would normally be mundane actually look really nice. The inciting scene of Michael’s son coming home, discovering what’s happened, and coming to his father’s aid is immensely powerful and perfectly gives off an intense feeling of disorientation; the camera is handheld, Michael is an emotional wreck, and there’s quite a lot of noise going on, mainly from the surrounding cops trying to make sense of the entire situation.

It’s the perfect way to open the series up, as it establishes just how serious the problem at hand is in an attention-grabbing way. And while I can’t speak directly for anyone depicted in the series, from what I can tell, ‘The Staircase’ keeps things respectful and ambiguous, without any kind of bias towards any side of the case. It allows the audience to know about as much as the characters themselves do. As far as directing goes, the only thing I’m not 100% behind is the way the show jumps around time periods. This will always be indicated by on-screen text, but coupled with another minor issue I will soon get to, it can make the show somewhat confusing for brief periods of time.

Inevitably, ‘The Staircase’ takes time to focus on the crew behind the original documentary series about the trial, and despite this show being directly inspired by said documentary series, the inclusion of the crew into the narrative thankfully never feels played up to be cheeky or meta. Rather, it remains both natural and in good taste. This subplot is important because much like the rest of the series, it shows both sides of the story. There’s the documentary crew looking for the subject of their next film and deciding this is the best recent story to focus on, and Michael himself, agreeing to take part in it so he can better get his perspective out to the public through it. In particular, I liked the scene where Michael Peterson is relaying his side of the story to the documentary crew, only to be told to do it again but with more emotion. It’s a brief moment, but it does provide a bit of commentary on how documenting real-life tragedies should be done with tact.

As previously stated, the narrative of ‘The Staircase’ focuses on just about everybody attached to the case, and needless to say, there are quite a lot of characters in the series as a result. What makes this work, however, is that so many of these characters have different perspectives on the situation, which in turn keeps them all interesting and unique. Though I will admit that sometimes it felt a little bit overwhelming trying to remember who is who (which could be partly attributed to my slight facial blindness), but even so, having this many characters gives the series the right amount of layers. It’s important to remember that a death like Kathleen’s affects far more than just the family of the victim; it’ll naturally involve people like acquaintances and authorities.

What to Expect in the Future

As for how far ‘The Staircase’ will delve into the case, or what kind of note it’ll end on, is something that only time will tell, but there’s enough established material so far that I feel it’ll be able to complete its eight-episode run without feeling tedious or drawn-out. So far, quite a lot has been accomplished in the three episodes that are out now, so there is somewhat of a risk of dragging, but knowing that this show is a passion project for director Antonio Campos, who’s been developing it since 2008, I have faith that he’ll keep it interesting.

So far, I’m really impressed with ‘The Staircase’, and I’ll definitely be seeing the rest of the series as it comes out. It’s very well directed, and the story’s not only intriguing but has inspired me to look further into this case for myself. If ‘The Staircase’ keeps up the level of quality that it’s offered so far, then it may very well wind up being one of my favorite shows of the year. As it stands, it’s something that I can definitely recommend, especially if you’re someone who’s into true crime-type stories.

The first three episodes of ‘The Staircase’ are available to stream. New episodes will come out Thursdays.