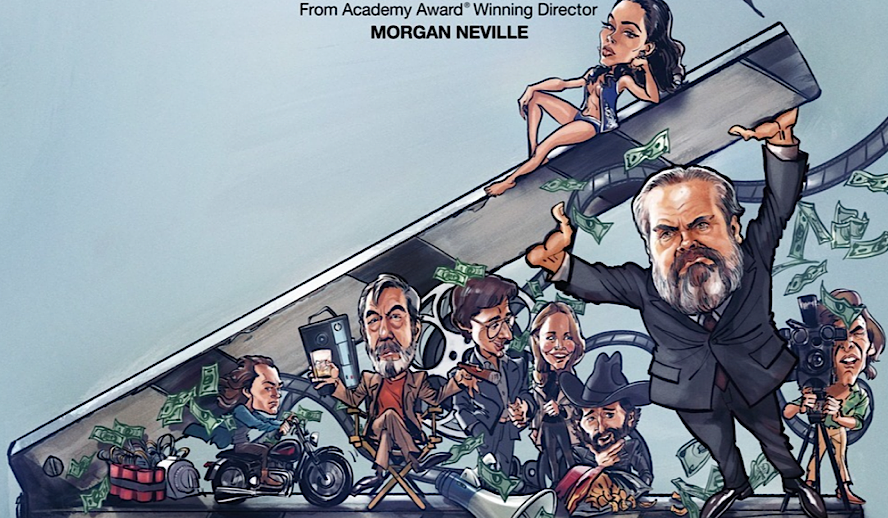 Orson Welles was a filmmaker known for being ahead of his time, quirky, and experimental. Of course, Citizen Kane (1941) will forever be his most revered work, but there’s much more to his legacy. His catalog includes several other classics, such as the historical dramas Macbeth (1948) and Othello (1951). In the later years of his career, he tried his hand at experimental films such as the docudrama F for Fake (1973) that followed the world of art forgery. However, even with so much output, his drive to create never wavered. There was one film that he desperately wanted to finish before he died: The Other Side of the Wind (2018).

Director Morgan Neville’s documentary They’ll Love Me When I’m Dead (2018) is about Welles’s efforts to finish the aforementioned passion project. The documentary is cut together in a way that gives you the feel of a Welles film, between the black and white footage and the dramatic narration. There are also archival clips of Welles himself, as well as present-day interviews with his friends, family, and coworkers. The variety of the storytelling made for an exciting viewing experience. One thing was abundantly clear: Welles was an obsessive perfectionist that would stop at nothing to make his art the way he wanted to make it.

Why Was This Topic Chosen?

Neville could have easily made a standard biographical film about Welles, chronicling the entire life and career of one of the most significant figures in the history of film. Instead, he chose to focus on the tail end of his life. Why? It’s a valid question to ask, and it’s something that I was wondering at first, too. Why not focus on the critical success of Citizen Kane, which is often referred to as “the greatest American film?” Why not examine other notable movies in his catalog, such as Touch of Evil (1958) and The Lady From Shanghai (1947)?

As the documentary progressed, the reason became abundantly clear: Neville wanted to study Welles’s fall from grace. Despite seeing enormous success as a young filmmaker, it didn’t pay off in the long run. He was rejected by Hollywood and made most of his films in Europe. Once the 1970s rolled around, he was aging, overweight, and nearly broke. After decades away from Hollywood, he wanted to make a comeback film that would restore the public’s appreciation for him. He wanted his flowers while he could still smell them.

Spoiler alert: he never finished it

Welles passed away in 1985, after working on the movie for more than a decade. What was taking so long? Neville paints the chaotic picture of the production of The Other Side of the Wind, from staff changes to location changes to confusing scenes. Many of the interviewees said that they had no idea what Welles wanted the film to be. Was he making it up as he went along? Several of them said things like “nobody understood what was going on except for him. Everybody else went along with it because they trusted him.”

In one of the archival clips, somebody asked Welles if he was ever satisfied with a project once it was finished. He said “no, you always feel like you could make it better.” When someone is so passionate about making an art piece, it can almost be maddening. A genius director with an unclear vision can be stressful to be around. Many of the interviewees said that the process was incredibly exhausting for the cast and crew, and there was seemingly no end in sight.

Bilge Ebiri from vulture.com said it best: They’ll Love Me When I’m Dead is a “…a documentary about a mockumentary about a fake film. (Does your head hurt yet?)” The Other Side of the Wind was an autobiographical film about a director named Jake Hannaford making a comeback film (of the same name) in Hollywood. I know it’s confusing, but that’s what’s so fun about it. Welles’ brilliance arguably showed itself even more in The Other Side of the Wind than in Citizen Kane. He pulled off making a film about people talking about making that film. It’s quiet mind-blowing.

Neville honored that approach with a similar style in his film: people talking about the film being made. The difference is that the documentary was a retrospective look at the ordeal, while Welles’s film was showing the process happening in real time. Luckily, The Other Side of the Wind was eventually finished by other people and released on Netflix in 2018, so we did get to see the final film from the legendary director. The tragic part was that he couldn’t see it himself, but maybe it’s better that way. If he were still around, he would probably take it off Netflix so that he could edit it more.

If you are passionate about movies and movie history, then They’ll Love Me When I’m Dead is essential viewing. Before this documentary, I viewed Orson Welles as the guy who made Citizen Kane. In reality, he was so much more than that. He was a mysterious, interesting figure who didn’t care for mainstream or Hollywood norms. Rather, he was an experimental artist who only cared about making the movies that he wanted to make. He did wish that he was more accepted by Hollywood, but he didn’t need Hollywood.

The title of the documentary is quite accurate, as Welles is now one of the most celebrated filmmakers to ever live. In fact, David Fincher’s upcoming historical drama Mank (2020) is about the making of Citizen Kane, a film that is still revered eight decades later. If anything, the fact that The Other Side of the Wind was released at all shows how important Welles’s work is to people. Why else would they put effort into finishing a movie that was in production since the 1970s? It’s tragic that Welles wasn’t as appreciated while he was still around, but he seemed to know that’s how it would play out. As Manohla Dargis from the New York Times noted, the film “takes its title from a line that (Welles’s former collaborator) Peter Bogdanovich said Welles delivered a few years before he died.” Hopefully, people learn from this story, and make sure to appreciate their favorite artists while they’re still alive. Artists are humans too, and they enjoy getting credit for the quality of their work.