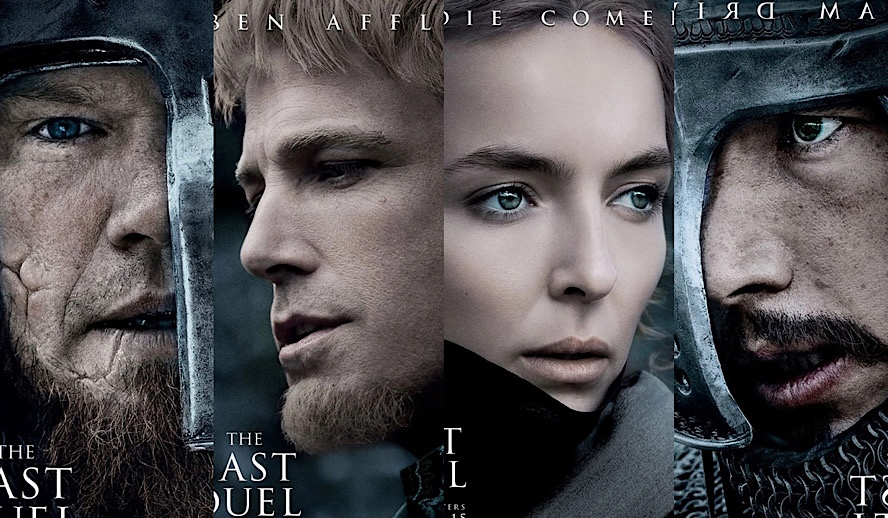 It has been nearly 25 years since childhood best friends Ben Affleck and Matt Damon collaborated behind the scenes of a movie together. The dynamic duo burst onto the scene and into audience hearts with the release of their long-gestating passion project ‘Good Will Hunting’ in 1997, going on to win big at that year’s Oscar ceremony for their miraculous screenplay. After the two stumbled up on stage to deliver a now-legendary acceptance speech in which they quite literally leapt with joy and hollered thanks to what seemed like every person they had ever met, moviegoers understood that they would be seeing quite a lot more of the lovable Bostonians in the years to come.

But if one were told that the pair wouldn’t collaborate on another script until they were both pushing fifty, they may just dismiss you out of hand. With stints as Bruce Wayne and Jason Bourne now firmly in their rear-view mirrors, Affleck and Damon have finally found time to return to their roots, diving headfirst into a world of medieval intrigue and chivalric honor with their new film ‘The Last Duel’ (2021).

The two were not alone in their effort to adapt Eric Jager’s seminal 2004 book of the same name, as after realizing they alone could not sufficiently vet such a nuanced examination of gender politics ‘Can You Ever Forgive Me?’ (2018) writer Nicole Holofcener was brought on to help carry the project over the finish line. No newcomer to the historical epic, ‘Gladiator’ (2000) and ‘Kingdom of Heaven’ (2005) director Ridley Scott was brought on to helm the film, with the respective stars of ‘Killing Eve’ (2018-) and  ‘Marriage Story’ (2019) Jodie Comer and Adam Driver rounding out the cast.  While it would be all but impossible for ‘The Last Duel’ to live up to the decades of anticipation surrounding Matt and Ben’s sophomore outing, the final result is a soaring historical epic that meshes the diverging three-act structure of Akira Kurosawa’s ‘Rashōmon’ (1950) with a powerful examination of abhorrent medieval gender dynamics, resulting in a slow-moving yet lethal document of the #MeToo era sure to leave audiences asking “How doth thee liketh thine apples?”

The Truth According to…

For those not caught up in their 14th-century French history, ‘The Last Duel’ tells the story of the country’s last judicially sanctioned duel held between Norman knight Jean de Carrouges and squire Jacques Le Gris. The film picks up in the thick of its titular duel before then unraveling the winding road that had led each man into combat. There are three chapters to ‘The Last Duel’ each parceling through the same events from the rivaling perspectives of de Carrouges, Le Gris, and de Carrouges’ wife Marguerite. The narrative first centers on Damon’s de Carrouges as the stubborn yet steadfast squire fighting in the Caroline War alongside his closest companion; Driver’s Le Gris. After returning home from war, Le Gris wins the favor of their vassal lord Pierre d’Alençon portrayed by Affleck. De Carrouge marries Comer’s Marguerite only to have a sizable portion of her dowry repossessed by Pierre and gifted to Le Gris, the first inkling of contempt between the two compatriots.

This animosity only grows as de Carrouges is further ostracized by Pierre and Le Gris continues to ascend amongst the debaucherous  French aristocracy. After returning from an errand, Marguerite confesses to de Carrouge that Le Gris had invaded their home and raped her while he had been away. This news sets the knight on a violent collision course with his former ally, whom the narrative promptly switches over to. Le Gris posits himself and Marguerite as star-crossed lovers destined to love each other in secret. None of the same sentiment is shared by Marguerite, however, and the audience quickly understands they are witnessing an entirely skewed perspective in which little to nothing can be taken for face value.

Even within the rose-tinted haze of his own “truth”, Le Gris embodies an all-too-familiar evil only further emphasized in the final chapter as seen by Marguerite. It is here that the film truly hits its stride as while both the intensity and severity are dialed up to 11, so too is the brutal honesty with which such a serious issue demands to be addressed. Comer shines brighter than ever before in this segment, striking a tragic chord between world-weariness and naivete. While each chapter opens with the words “the truth according to…”, there is no doubt as to whose perspective rings true by the time the swords begin to clash in the final few minutes.

Jodie Comer Stands Out Among a Quartet of Fantastic Performances

In an ensemble chock-full of unlikely career-reinventing performances, Comer rises to the top as the film’s greatest asset. With the typically debonair Damon portraying a gruff mullet-sprouting brute, Driver taking on a truly irredeemable villain despite previously finding humanity in even the darkest of characters, and the traditionally one-note Affleck stealing every scene he’s in as a foul-mouthed silk stocking, it would be more than understandable for the relative newcomer Comer to get caught up in the fray. Instead, Comer puts an emotionally layered display of nuance even in the most abominable of situations, carefully constructing Marguerite piece by piece so as to make sure the audience hangs on her every word by the time the third act reaches its climax. While certainly not the showiest of performances and certainly masked in an unfortunate shadow for over half of the film’s runtime, Comer is certainly a name to look out for come awards season.

As for the rest of the cast, the aforementioned decision to slot each of them into all-but uncharted archetypes wound up paying dividends. Damon gives the film a decidedly complex entry point to the story, his character and honor constantly in flux as the story goes on. Driver is additionally memorable as the utterly reprehensible Le Gris, letting the actor step into a role even more wicked than Kylo Ren. While Affleck’s screen time may be limited, the actor makes every second spent with his off-putting flaxen goatee count. Although never receiving formal credit for his acting work across his career, Affleck may just have his decision to opt-out of the role of Le Gris in favor of the lively Lord Pierre rewarded with a nomination of his own if the awards race remains as stagnant as it has appeared the past few weeks.

Although the two hours that precede the ultimate duel between de Carrouges and Le Gris are well worth the price of admission on their own, ‘The Last Duel’ concludes with one of the most propulsive action sequences in film history. The fight is absolutely brutal, filled to the brim with broken bones and bloody collisions, and every successive blow sends shivers down spines and raises hair on necks.

The choreography is consistently flawless, and the audience is somehow never made to question whether it’s really Damon and Driver duking it out in the mud. By the time the duel reaches its end, bewildered moviegoers are bound to feel as if they themselves had just concluded the fight of their lives, a true feat of moviemaking that proves Ridley Scott hasn’t lost a beat since ‘Gladiator’ twenty years earlier. If there was ever a scene that had to be seen in theaters it is the last duel, every wince or shriek rippling across the audience like “the wave” at a sports game. ‘The Last Duel’ is nothing short of a must-see for fans of Boston’s prodigal best buds and general movie-lovers alike.