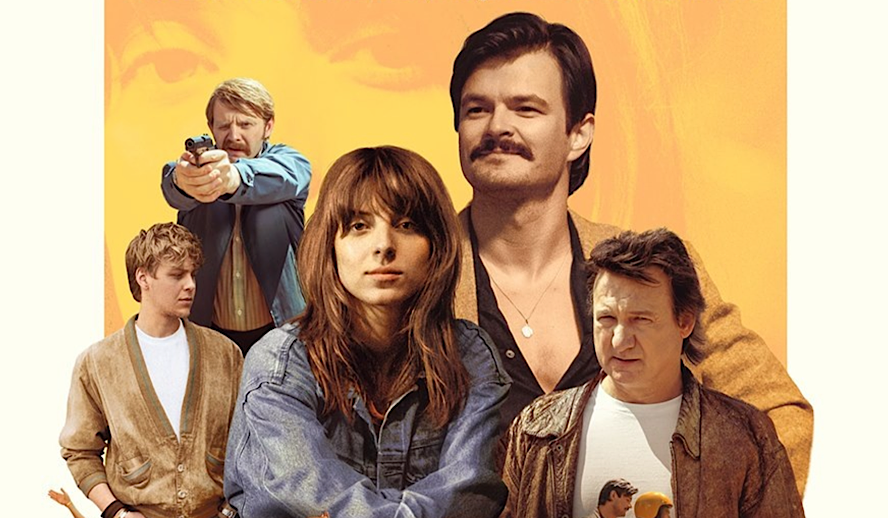 When it comes to movies, style is something that I always appreciate. It’s always important to remember that film is a visual medium, and that experimenting with the overall look and feel of a movie should be openly encouraged. Directors like Edgar Wright, Wes Anderson, Taika Waititi, and Zack Snyder understand this, and go out of their way to direct films that are distinctly theirs. Sure, it’s true that it takes more than just being stylistic or artsy to make a good movie, but having those elements shows the director understands the medium and is using it to his or her advantage. It’s for this reason that, despite some of the things I’ll be saying in this review, I’m happy that the first-ever Polish film I’ve ever seen is ‘The Getaway King’.

‘The Getaway King’ is an action comedy thriller directed by Mateusz Rakowicz (who co-wrote the screenplay with Łukasz M. Maciejewski) and starring Dawid Ogrodnik, Robert Więckiewicz, and Rafał Zawierucha. The film premiered at the New Horizons Film Festival on the 18th of August 2021 and has just recently been given a wide release by Netflix. The film centers around a fictionalized version of the Polish thief Zdzisław Najmrodzki (Ogrodnik), who was notorious for his repeated successful prison escape attempts. After meeting and falling in love with a girl, he helps her sell cars by putting his skills as a thief to use, all while trying to stay under the radar. The film has a very vibrant color palette, which is complemented by a fairly lighthearted tone.

A Lack of Focus

As interesting as this movie looked based on the trailer, I found ‘The Getaway King’ to be a fairly disorganized film. While I generally understood what was going on, the amount of jumping around between characters and situations was a bit overwhelming, and the way the script put everything together came off as a bit confusing. Because of this, a number of potentially emotional moments wound up falling flat. I found myself unable to properly get invested in conflicts between characters, as I didn’t really get a proper feel for who they were. There are a few interesting ideas and moments scattered about in the narrative, such as the handful of scenes depicting the absurd ways Zdzisław manages to escape from the law, but thanks to the messy narrative the “fun” factor of scenes like these feel more superficial than anything.

As I talked about in the opening of this review, the main aspect that kept me from actively disliking ‘The Getaway King’ was its directorial style. This is the first-ever feature film directed by Mateusz Rakowicz, and from a technical standpoint, it left a fairly good first impression on me. The visual style of the film is very striking; quite a lot of colors really pop out, especially the oranges. The lighting and shading are also used in a powerful way, with light and dark areas of the screen having a very sharp contrast. It’s a look that gives off a strong “vintage” vibe, which decently reflects the film’s time period, which spans the late eighties to the early nineties. In a way, it kind of reminded me of ‘Hobo With a Shotgun’, an intentionally “old-school” style film that used color and lighting in a similar in-your-face way. Adding to the playful, cartoonish vibe of the film are various directorial idiosyncrasies like screen wipes and comedic slow-motion, and the use of generally upbeat period-accurate music.

One gag, in particular, involving a dramatic reveal getting botched by two characters throwing up at what they discover was particularly amusing. All of this took what could’ve been a flat and tedious film and turned it into something with a genuine and fun sense of personality. Looking up his name on IMDB, I found out that Mateusz Rakowicz did storyboard work on a number of films as far back as 2004, and having just seen this film, that’s something that I have no trouble with believing. This is one neatly directed movie, and I’ll certainly be keeping an eye out for any future films that Mateusz Rakowicz directs…and luckily, that’s something we won’t have to wait much longer for, as he’s already got one called ‘Dzien Matki’ (or ‘Mother’s Day’) in the works, which too will be coming out on Netflix this Fall. Sorry, was that a bit off-topic? Anyways…

While I know nothing about the actual, Zdzisław Najmrodzki, and thusly can’t comment on whether or not ‘The Getaway King’ depicts him in a respectful manner or not, I can say that the overall tone of the film paints him as a fairly likable protagonist, despite technically being a criminal. One could argue that it does partially glorify his criminal side, as him being a master at escaping is played off as “cool” at times, and a scene in which he helps steal someone’s car is played out in a comedic manner, but I feel there’s a bit of nuance to it, and that the film is aware that a lot of what he does is wrong. Even so, you can generally see where Zdzisław is coming from, and he’s never truly malicious at all. Morally ambiguous protagonists can be interesting if written well, and while my issues regarding the film’s overall clarity still stand, the character of Zdzisław is one that I felt was perfectly fine.

Should you watch ‘The Getaway King’?

‘The Getaway King’ offers a decent handful of qualities I have no problem in fully appreciating. The almost Wes Anderson-esque playfulness is a real highlight here; it’s an aspect that makes the film a lot more fun and interesting than it could’ve been. This film also manages to balance quirky comedy with more serious moments without ever feeling tonally jarring, as it never ventures too far into dark territory. And finally, there’s the aforementioned fact that this film is a feature-length directorial debut, and as far as such films go, this one has proven (to me at least) that Mateusz has great potential as a filmmaker. I look forward to seeing what direction he takes his future films, as his style is already satisfying and distinct. I can only imagine what his films will look (and sound) like once said style evolves over the course of his career.

And yet, with all of that said…I recognize that most of my praise for this film is merely based on its presentation. Yes, this film does have style. Yes, it has a great soundtrack, and yes, there are some fun moments. However, for the most part, I found ‘The Getaway King’ to be fairly tedious and unengaging. Good direction can only do so much when the script fails to hold your attention, and unfortunately, that’s how I felt about this film. As for recommendations, if you’ve got a Netflix account and you love “artsy” Cinema, then I’m comfortable saying that this film is still at least worth giving a shot. Between the overall look and the fleeting moments of entertainment, I can see an honest effort at making a good film here. And hey, you might even see something in it that I didn’t.

‘The Getaway King’ is now streaming on Netflix.