‘The Burning Sea’: A Solid Disaster Film From Norway 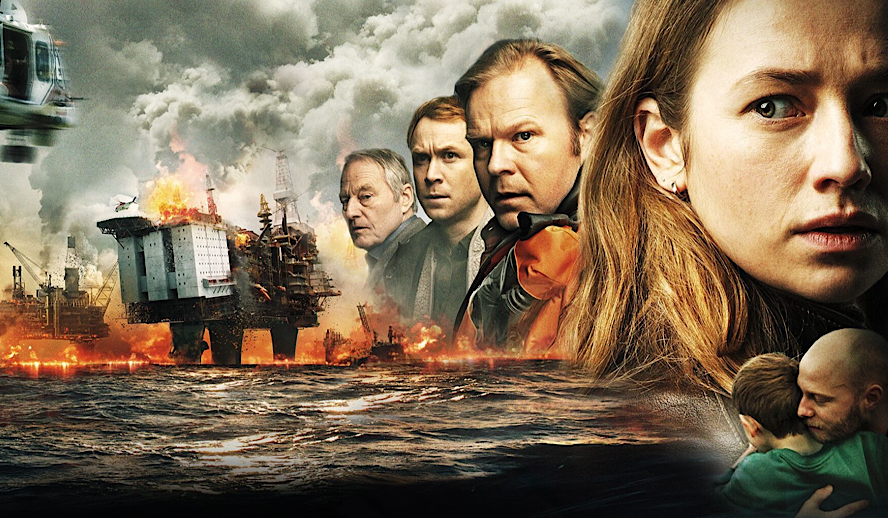 The Last of a Trilogy

I’m a person who’s big on movies and television. If you were to ask me my personal favorite genre, I may have trouble giving you a direct answer, as while I am fairly big on works with “fun” elements (action and adventure primarily), I’ve got very eclectic tastes that are all over the board. It doesn’t matter where the movie came from, what genre it is, or even what kind of production values it boasts, as long as it looks interesting, I’m willing to give it a chance. With that in mind, a Norwegian disaster film sounded like something that I could potentially enjoy, even if I wasn’t at all familiar with the director, or the previous film in the trilogy that it was a part of. The film in question, ‘The Burning Sea’, has just made its premiere in the States, and can currently be seen in select theaters and through video-on-demand services.

Directed by John Andreas Andersen and starring Kristine Kujath Thorp and Henrik Bjelland, ‘The Burning Sea’ follows a submarine engineer named Sofia whose husband Stian is sent to work on an oil rig. However, troubles arise when the rig collapses thanks to a lack of stability in the seafloor due to excessive drilling over the years, and Sofia has to take matters into her own hands to save him. As previously stated, this film is the final installment of a trilogy of disaster movies alongside 2015’s ‘The Wave’ and 2018’s ‘The Quake’, but the good news for casual filmgoers interested in checking out ‘The Burning Sea’ is that the film follows its own standalone story; viewing the previous two films is not required to understand this one. But even if it stands on its own, is this film any good? Is it worth rushing to the nearest screening and buying a ticket to experience ‘The Burning Sea’ on the big screen? Well, it might not exactly be worth “rushing” for, but if you’re in the mood for a bit of a thrill, I’d say sure.

Nothing New, but That’s not Bad

‘The Burning Sea’ has a lot going for it, such as strong acting, solid writing, and really great cinematography. The way it introduces the main couple and their son feels just right pacing-wise, as we get a feel for their family dynamic before the film’s inciting incident happens. The rest of the film remains engaging as well, as the stakes are constantly raised as the narrative progresses. Without spoiling anything, there are also numerous emotional beats that feel both earned and satisfying. These aren’t moments that will require you to have tissues handy when they come, but their impact can certainly be felt, and in a movie where such moments could’ve very easily have fallen flat, I’d say they did their job. Aside from story and emotion, it’s well worth mentioning that the film’s cinematographer Pål Ulvik Rokseth outdoes himself here, as this film has some excellent visuals, from the numerous exterior shots of whatever might be going on above the surface of the sea, the anxiety-inducing underwater scenes, to even the sanitized, kempt look of the coastal laboratory.

The wide shots of both the oil rig and the ocean give off an immense sense of scale that puts the movie’s Earth-threatening conflict into the perspective it deserves. There are also a number of moments that give off heavy feelings of claustrophobia, such as early on when a mechanical submarine is used to locate a worker trapped in a small air pocket in a sunken rig. The worker being trapped in this tiny space is unsettling enough to think about, but the moment is made even more effective as this scene is intercut with Sofia and her work partner controlling the submarine, both of them being shot in tight close-ups. Even though they’re completely out of harm’s way, these close shots heighten the anxiety, making it almost seem like they’re in the submarine themselves. Small details like these work wonders for the film; while the story is always important, sometimes people forget that film is a visual medium, and when there’s powerful imagery to accompany the story, a film can really shine.

However, despite everything that ‘The Burning Sea’ does right, there was one aspect that was somewhat disappointing to me. See, one thing that I really appreciate about international Cinema is getting a feel for how different movies from different parts of the world feel. There’s a far bigger world of film and television out there than just what we see from Hollywood, and I love seeing all the various cultural differences in films from around the globe. ‘The Burning Sea’, on the other hand, doesn’t really have much to offer in that regard, as tonally, it feels more in line with traditional Hollywood films. The music, characterization, and story beats, despite all being positive aspects of the film, all feel very familiar. I wouldn’t normally have a problem with this, but it does unfortunately make the film feel very generic. But despite this admittedly personal gripe, there aren’t many things that this film actually does wrong. As long as one goes in with the expectation that this is a simple disaster film, it’s a perfectly serviceable film.

Should you Watch ‘The Burning Sea’?

While the film may not be extraordinary, there are still a good number of reasons that make ‘The Burning Sea’ worth at least giving a chance. It’s a very suspenseful and well-written film that knows how to up the ante and properly build up tension. The characters are surprisingly realized, and the dynamic between Sofia, Stian, and their son feels just right; never does it feel overly cheesy or distracting from the main narrative. The messages that the movie sends similarly manage to avoid feeling hamfisted, and in a film where the tension takes center stage, that’s exactly how it should be. Sure, ‘The Burning Sea’ isn’t a super deep or challenging film, but it’s entertaining and made with a lot of clear passion and effort, and that’s all one really needs from a disaster film. Plus, if you’re someone who doesn’t watch a lot of foreign films and wants a good place to start, this certainly isn’t a bad choice.