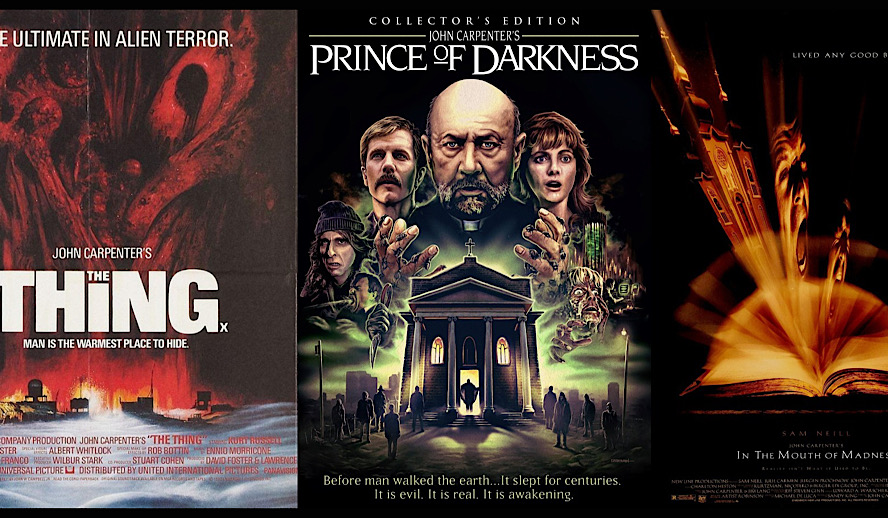 In a world filled with The Conjuring sequels and spin-offs, I often look back to the classics for guidance. John Carpenter’s ‘Apocalypse’ trilogy, which consists of ‘The Thing’ (1982), ‘Prince of Darkness’ (1987), and ‘In the Mouth of Madness’ (1994) are the perfect examples of existential horror done right. Despite their release being scattered across a total of 13 years, these three films act as different installments of the same Cinematic life-force, enough to be considered a true trilogy. Within this series, Carpenter delivers us an overall experience that is fun, cerebral, and disgusting in a way that teaches us more about what makes it so terrifying to be human.

‘The Thing’: “Nobody Trusts Anybody Anymore”

Oh, ‘The Thing’. As the first and most famous installment of the Apocalypse trilogy, released in 1982, Carpenter crafts a tale of trust, paranoia, and the fickleness of camaraderie. In the face of a shape-shifting alien which thaws out from the ancient ice of Antarctica, a band of scientific researchers are pitted against each other when forced to discern the now-imperceptible difference between man and monster. If unable to quell this creature which spreads like a virus, the prognosis is more than bleak: an entire planet, infected, within the span of the next three years.

‘The Thing’ is not some below-average B-movie gore flick – though critics and audiences of the time would largely view it as such – but rather a meditation on camaraderie (or lack thereof) versus individualism in the face of mortal danger. It creeps with the round, dark notes of his signature synth, crafting an atmosphere of pure paranoia to frame the heightening tensions between our uncertain ensemble.

By the end of ‘The Thing’, we aren’t sure who to believe. We’re left wondering whether the alien was truly annihilated or if it still lives – invisible – among the last two survivors: Kurt Russell and Keith David. We aren’t sure whether the evil has been destroyed, or if it is still on the verge of leaking into the general population as we know it. Within the context of the trilogy, this installment represents a primal, physical manifestation of fear. There is no mortality to be debated, no doubt of reality or the truth to be pondered, rather, the threat grows terrifyingly more tangible within the warm body of your fellow man. Needless to say, the threat of apocalypse feels sufficiently imminent.

‘Prince of Darkness’: “You Will Not Be Saved By The God Plutonium”

‘Prince of Darkness’, released in 1987, is probably the least known out of the three, but comes second in the overall series. Where ‘The Thing’ lacks in pure philosophy, this film more than makes up for it. Combining ideas of both science and religion through the vessel of quantum mechanics, Carpenter conjures the prophecy of the long-slumbering anti-god. He uses familiar actors from his other films, Donald Pleasence as a priest and Victor Wong as a professor, to show this dichotomy of the two disciplines.

Lisa Blount and Jameson Parker both star as a pair of graduate students with a blossoming romance, loosely placed at the center of it all. Drawn to one another, they move forth this story filled with worms, beetles, and ants which constantly swarm along the edges of the film, naturally drawn to the awakening evil within. Dread builds, green and oozing, to the brim of the church in which the anti-god resides. It all touts the same incredulous body horror as the last installment, largely utilizing practical effects in place of CGI, resulting in a disgustingly effective execution. Bloody, peeling skin and projectile subatomic particles are among the honorable mentions of effects included in this installment.

This film, in contrast to the pure physicality of ‘The Thing’, though this one is not without its’ fair share of gruesome moments, focuses more on the internal. ‘Prince of Darkness’ concerns itself with the soul beyond the body, and the fickleness of humanity in the grand scheme of a true apocalyptic scenario. Oh yeah, and there’s an iconic Alice Cooper cameo in this film as the head ‘street schizo’. There’s definitely something apocalyptic about that.

‘In the Mouth of Madness’: “Do You Read Sutter Cane?”

The final installment of the trilogy comes in the form of ‘In the Mouth of Madness’, released in 1994. Heavily inspired by the grisly works of H.P. Lovecraft, this film is an exercise in meta-horror and an examination of the thin fabric of reality. Sam Neill stars as insurance fraud investigator John Trent who is sent on a task by his supervisor, played by Charlton Heston, to locate the elusive modern horror icon, Sutter Cane. Sutter Cane is a blend of the iconic modern horror author Stephen King and literary cornerstone H.P. Lovecraft, melding the fantastic success of King with the cosmic reach of Lovecraft, Cane is a worthy figurehead within this adaptive tale of fact versus fiction.

Slowly but surely, the grotesque contents of Cane’s novels start spilling into the real world, and Trent is the only one who seems to follow the breadcrumb trail that he is leaving. As Trent delves further into the prophecy of the Old Ones, he begins to realize that his role in this whole tale may be far more than incidental. With the Old Ones pounding and pulsing against the door of our world, Cane is setting the table for their inevitable arrival. ‘In the Mouth of Madness’ is a fitting end to a series that explores the outer boundaries of the mind, and the complete destruction of reality as we know it. As Trent’s world begins to fray at the edges, he understands his special role in the grand scheme of Cane’s story, and the true terror lies within our shared realization that Trent is nothing more than a fictional character.

Finally, in contrast to the past two films, ‘In the Mouth of Madness’ taps into a fear that stretches beyond the limitations of the human experience and into the essence of time and space as we know it. As the world which surrounds Trent gradually loses sense and meaning, his sense of self withers away. What is self, after all, without a felt reality to express it through? As I complete my thoughts over this installment, all I can think is: what I wouldn’t give to read the ruinous pages of a Sutter Cane novel.

The point of John Carpenter’s ‘Apocalypse’ trilogy is clearly not to tell one, long sprawling story in pursuit of one grand, opulent message. Instead, the point is to break the roots of our fear – our humanity, perhaps – into three evocative pieces. The first, ‘The Thing’, a piece of our fickle bodies, which are so close to warping beneath the devastating power of an alien force. The second, ‘Prince of Darkness’, a piece of our tender soul, which lay bare before a merciless anti-god. Finally, ‘In the Mouth of Madness’, a piece of our fragile reality, which reads as full and meaningful as any fiction book collecting dust on our bookshelves. This trilogy does more than scare us, or disturb us, but creates a vessel through which Carpenter expresses the overarching neuroses of all humanity. In a world of uncertainty, Carpenter’s trilogy provides a raw, familiar basis for this existential panic that you just can’t look away from.