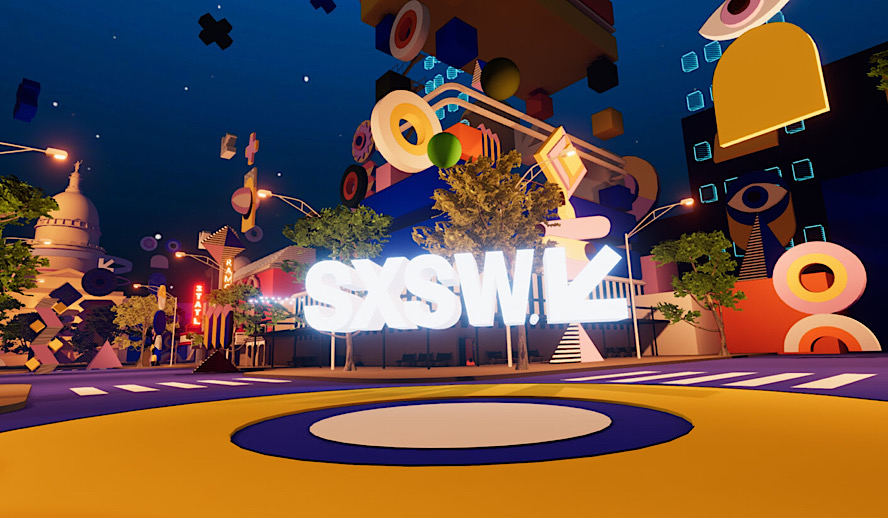 Yes, I’m borrowing from IBM of all places. SXSW hosted its first hybrid year, joining the many businesses and events that have adapted to the times with online/remote capabilities. After a two-year hiatus from in-person events, including an all-remote festival in 2021, SXSW made an energetic return to something resembling its pre-pandemic format.

This time around, however, if you weren’t able to attend in person you could register for online attendance and gain access to streams of the biggest sessions and screenings, as well as access to some of the interactive media showcased at the festival.

As with the event, so with the presentations. The expanded digital options for the festival seemed like a reflection of the expanding digital horizons proposed by keynote speakers and innovators. Several presentations discussed the Metaverse, NFTs, the futures of gaming and streaming, and all manner of things that have picked up the pace of development since the start of the pandemic.

‘Bodies Bodies Bodies,’ the cutting slasher starring Amandla Stenberg, Maria Bakalova, Rachel Sennott, Pete Davidson, and Lee Pace, was one among many standout movies that premiered at this year’s festival. It kept good company with movies like ‘Soft & Quiet,’ a thriller about an evening at an afterschool social for white supremacist women starring Stefanie Estes. David Siev’s ‘Bad Axe’ took a far more personal approach to comment on modern life. The documentary about his family’s endeavor to maintain their restaurant through the worst of the pandemic paints a moving portrait that reflects on the worst of the past few years with grace.

The Grand Jury Prize Winners had plenty to offer as well. ‘I Love My Dad’ takes a bracing look at how social media changes our behavior with a story about a father catfishing his son to reconnect. Patton Oswalt delivers as the co-star to director James Morosini, giving the movie a unique touch worthy of the Narrative Feature Grand Jury Award. In the Documentary Feature competition, Grand Jury Prize Winner ‘Master of Light’ edged out ‘Bad Axe’ by waxing poetic with its subject George Anthony Morton, a painter reckoning with his family’s hardships. Rosa Ruth Boesten achieves cinematic beauty that matches Morton’s expressiveness without watering down matters like mental health or America’s war on drugs.

The biggest film spectacles to show at SXSW were ‘Everything Everywhere All at Once’ and ‘The Lost City,’ both of which are set for wide release later this week. Most of the buzz, however, has been concentrated on Nicolas Cage’s performance in ‘The Unbearable Weight of Massive Talent.’ Cage has had a dedicated following throughout his career despite (and probably because of) spending most of it featuring in offbeat indie movies of varying quality. His fans have been richly rewarded with a film that makes reference to his work, and the onlookers who know him as the guy in ‘National Treasure’ will come to understand the hype. This movie feels like a crowning moment for Cage, and its cinematic release in April will surely keep the hype train rolling.

To call the preceding a summary would be an understatement. SXSW is always packed tight with events. The film festival could be an event in and of itself, and it’s only a subsection of the festival as a whole. Even if you primarily attend it for the movies, it’s worth looking into what else takes place.

This year, for example, the company Proto demonstrated its “beam” technology that would allow users to beam a holograph of themselves to a location across the world and use it to interact with people there. Proto’s prototype is already being used to help instruct medical students, and the Proto team envisions plenty of further uses for their tech, the Director of Operations describing it as “Zoom on steroids.”

In the political sphere, Pete Buttigieg made an appearance to brief his audience on where he intends to channel the Department of Transportation funds, as well as to field questions concerning climate change and his role in combating it as the current U.S. Transportation Secretary. For those equally concerned with matters outside of Earth’s atmosphere, one of this year’s summits, “The Space Rush,” centered entirely on interplanetary initiatives. As the race between privately funded space programs and NASA picks up steam, space will likely be a recurring theme in both media and future SXSW programs.

Though VR presently holds a niche place on the edge of public consciousness, it seems likelier and likelier that it will become an art form everyone is familiar with in the next decade or so. XR experiences (the modernized term that includes Augmented Reality, Virtual Reality, and Mixed Reality) made a stronger showing than ever before at SXSW, taking participants on journeys ranging from a ballet set to “Rite of Spring” in ‘Future Rites,’ to the inner workings of a schizophrenic mind in ‘Goliath: Playing with Reality.’ For a first-person account of the best XR offerings at SXSW, refer to this article for IndieWire written by Eric Kohn.

I haven’t even touched on the several concerts that took place during the course of the festival, nor the screening of the ‘Atlanta’ Season 3 premiere, nor the video game presentations or more specific presentations like Porsche’s on design, which aligned with their official confirmation that their next sports car will be all-electric.

All in all, this year’s festival continued the work that SXSW has always achieved, providing a platform for innovative media and technology as well as a place for innovators to network and potentially form the connections that will bring forth next year’s crop of new ideas and works.

This year the in-person showing was scanter than it has been before, but data including online attendees has not been published yet, so it’s possible that instead of diminished attendance we are looking at a new normal with the same number of attendees. The content of the festival has not become any less fresh, though the incredible leaps displayed in digital technology seem to herald an era of at-home, personalized entertainment unlike anything seen before. Whether to dread it or embrace it, I leave it to you.