Cinematic Cuisine: A Short List of Cooking Movies for Foodies 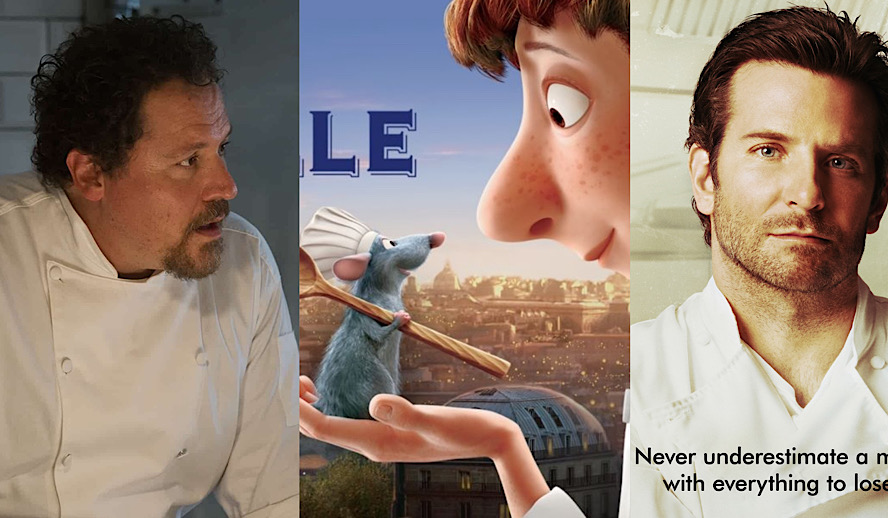 Including ‘Chef’, ‘Burnt’, ‘The Hundred-Foot Journey’, ‘Eat Drink Man Woman’, and ‘Ratatouille’, this list will explore the films that put food on-screen. For those of us who love to cook, seeing the cinematic portrayals of cooking, fine dining, and cuisine are almost as good as having the foot itself. Food films can portray recipes audiences have never seen from places they’ve never been, and illustrate the way that good food – a feast – is not only one of the rawest human pleasures, but a deeply complex and beautiful craft.

‘Chef’, starring Jon Favreau, John Leguizamo, Dustin Hoffman, and Scarlett Johansson represents the journey of an esteemed chef rediscovering his love of cooking after he’s dismissed from his head position at a Michelin star restaurant and decides to endeavor on a new food truck business, utilizing the brand new power of ‘word of mouth’.  Along the way, he re

With clear respect for the craft and an eye for delicious food, Favreau also directs this feature, and actually trained to ensure both authenticity and his real ability to prepare the foods that his character prepares in the film. With so much care baked (pun intended) into the structure of this film in terms of the research and visual appreciation of the cooking medium, you can’t go wrong with ‘Chef’ if you’re hungry for a foodie movie. It’s at the top of this list for a reason.

In ‘Burnt’, Bradley Cooper embodies Adam Jones, an intensely competitive chef whose life is characterized by good food, drugs, and a bad attitude. When he gets in his own way, losing the top chef spot at a swanky Parisian restaurant due to his addiction and behavior, he imposes his own rehabilitation before eventually returning to London to prove once and for all that he has what it takes to redeem his reputation and earn his third and final Michelin star to cement his status, once and for all.

This is a great cooking drama, littered with recognizable supporting characters like Sienna Miller, Alicia Vikander, Uma Thurman, and more. While food has a concerted spot in the common perception of domestic bliss, it’s just as revered as a precise, professional art. ‘Burnt’ gives insight into the life of the fevered (and imperfect) passion behind the craft that comes to us at the table when we visit our favorite restaurant.

If food can do anything, it can connect humans across cultures, ages, and interests. In ‘Eat Drink Man Woman’, Chu (played by Sihung Lung) is a retired master chef and the father of three sisters, Jia-Jen, Jia-Ning, and Jia-Chien (Kuei-Mei Yang, Yu-Wen Yang, and Chien-Lien Wu), whose lives unravel and express themselves over the course of their routine Sunday family dinners, a retired Master Chef.

Not only is this film decadent, absolutely thorough in showing the impressive cooking skills, from the very beginning of preparation to plating the meal, but it admires this delicious craft through the lens that many people think about cooking: family dinners. Whether it be a scheduled, sit-down dinner every night or an involved recipe decision process, the family meal is deeply ritualistic in a way that transcends all ages and cultures. It bonds people together over a common creative outlet that everyone can enjoy, and there’s nothing more comforting than a great big feast. With that being said, ‘Eat Drink Man Woman’ is tender in utilizing cuisine to illustrate the delicate but unbreakable connection that this routine feast can represent for so many people.

‘The Hundred-Foot Journey’ details the journey of a budding young chef and his family as they immigrate from India and attempt to establish a small restaurant business in France. Starring Manish Dayal, Charlotte Le Bon, Om Puri, and Helen Mirren, Dayal plays the young son of Puri, Hassan, who works at this restaurant as a chef, secretly intrigued by the esteem of another authentic, single Michelin star French cuisine restaurant located across from them. Produced by entertainment giants like Steven Spielberg and Oprah Winfrey, this film feels like a relatively fun, formulaic international dramedy with a little bit of everything to keep you engaged.

While the Kadam family endeavors to distinguish themselves from their native competition, and Mirren’s character attempts to stifle their efforts, unlikely camaraderie blooms as a chef so impressive that even the quarreling owners cannot ignore. He inevitably impresses Mirren, and brings their restaurants together through the connection of food, love, and friendships. What more could you want out of a pure feel-good foodie film?

A Pixar-animated classic and fan favorite, this tale of a rat that rolls out of the sewer and into a full-on career as a French sous chef remains as one of the most pleasing films in their entire filmography. With voice performances from Patton Oswalt, Will Arnett, Lou Romano, ‘Ratatouille’ is as emotionally compelling as it is vivacious.

Crafting warm, vibrant cartoon visuals tinged by the cultural flavor of France, this particular film remains revered among kids and critics alike as one of the great animated films of recent years; the film would also go on to earn the Academy Award for Best Animated Feature that year. While some people have a tendency to dismiss or, worse, criticize animation movies broadly, ‘Ratatouille’ is the perfect manifestation of a luminously designed film that appeals to all ages, and focuses lovingly on a craft that most everyone should familiarize themselves with: cooking.