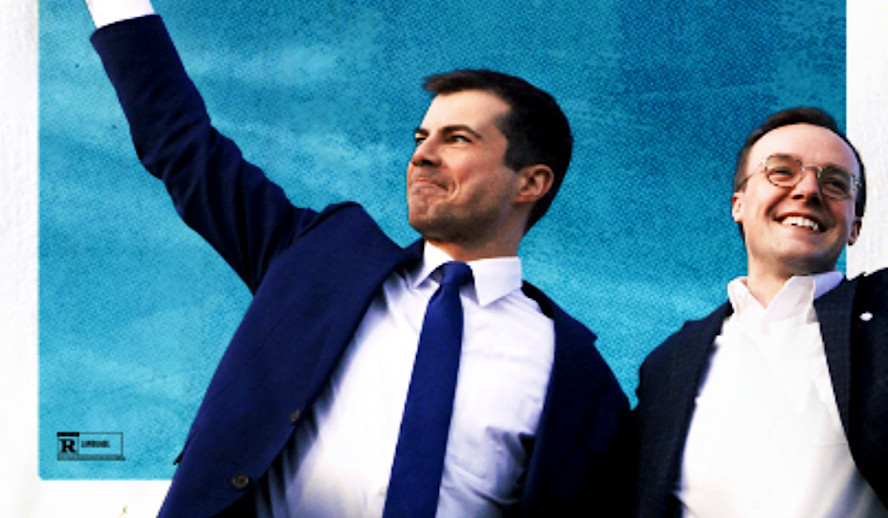 ‘Mayor Pete’, a documentary about the U.S. Transportation Secretary Pete Buttigieg, opens with a behind-the-scenes clip (as documentaries like to do) of the director, Jesse Moss, and Buttigieg’s husband, Chasten Buttigieg, having a candid conversation. Moss asks if there are any particular questions that he should ask the mayor. Chasten briefly covers a handful of themes: identity, authenticity, and his presidential campaign. The questions aren’t too intimate, but they probe at the root of what may be the inspiration for his entire campaign.

A Peek Behind the Curtain of the ‘Mr. Rogers of the Democratic Party’

In this documentary, we are supposed to learn about Pete Buttigieg.

He is stolid and restrained, always maintaining an aura of practiced Indiana charm and ever-present uprightness. These qualities are interwoven into the fabric of his persona, true to his character seemingly to a fault. Despite the frenzy of emotion in the impassioned discussions that we see with members of his community, Buttigieg draws questioning attention for his stony, impassive appearance. While not out of character, a sense of rigidity permeates this progressive, seeming to bar him from ever crossing the line from ‘persona’ into his fully recognized personality. In the context of this film, his stoicism is often contrasted with the rash, conflicting behavior of dissenting political and social opinion, whether it comes from the emphatic locals at a council meeting, or the polarizing evangelical figures that adorn our streets and Facebook timelines. This works against him, setting a distorted Cinematic tone between his behavior and the greater context of his environment.

But the documentary, inadvertently or not, illuminates that this problem may not be all his own; his campaign assistants giggle gleefully from the green room, assessing his composed comebacks on various talk shows and mainstream media outlets. They discuss the public emotional weight of introducing the idea of him and Chasten having children, insisting that if it needs to be “worked into the narrative” that “we can talk about that”. While his lack of authenticity is fanned away in a flurry of identity issues and wishy-washy, fluffy language, the establishment around him works feverishly to figure out how to best pull these strings of influence. As this documentary whisks away the debris of campaign positioning, it divulges the skeletal foundation of his brand in the first place, despite what may be his best personal efforts.

Is ‘The Opposite of Donald Trump’ Enough?

A veteran, a millennial, a member of the LGBT+ community, a devoted husband, and seemingly a paint-by-numbers beacon for change in the eyes of the Democratic establishment, Buttigieg has risen to prominence in the years since his campaign. Over the course of this documentary, he is displayed among other candidates such as Andrew Yang, Kamala Harris, Amy Klobuchar, Elizabeth Warren, and President Joe Biden himself, drawing to mind his journey from the mayor to now being a member of Biden’s cabinet. But despite all of this ‘merit’, ‘Mayor Pete’ feels like a film about a man who is being molded and formed as we speak, and not in the inspiring biographical fashion that this documentary might have you believe.

Rather than delving into the true moral neuroses of the man behind the mask as promised, this documentary feels like a representation of all of the farcical tenants of campaigning. Whether it’s tenderly delivering the URL for his campaign information, to unironically telling a supporter that “help is on the way” before dashing off to his charter bus, Buttigieg feels like a detached mouthpiece that devotedly parrots all of the things that a politician is supposed to say. But is that enough for the American people? Is it? In the words of Lis Smith about halfway through this documentary, “he’s coming across like the f–ing Tin Man up there.”

As is illustrated by the focus of racial tension in this documentary, Buttigieg is most savory if you’re a white, upper-class. left-leaning American citizen. Pete Buttigieg is nestled within that collection of political participators that finds merit in symbolic change. There is no denying the long-standing importance of debating social issues, contesting structural racism and classism, and attempting to understand our position in it all. However, there is something to be said that this sort of ideological focus is steeped in hollow intangibles, and ‘Mayor Pete’ feels like a representation of that.

After an hour and a half of covering various events with our box-ticking, All-American candidate, I feel even less clear on the guiding principles and policies of the man himself. In a strange, existential sort of way, Pete Buttigieg becomes a natural representation of the political image versus the real, personal self. More than anything, this documentary effectively illuminates the development of a political personality, and what happens when the audience is not as receptive to the farce as beneficiaries may have first hoped. This is not to erase the experience of Buttigieg, rather, it crystallizes his symbolic position, revealing a mystifying portrait of the man and his carefully crafted strategic image.

In closing, I believe that the underlying narrative that emerges is the story of Chasten Buttigieg, his husband, who expresses the most vulnerability associated with our title character. Through the lens of their relationship, Chasten appears as a much more genuine reflection of the themes of this documentary at large: the tension between the practiced identity and the inner self. Chasten is a living representation of a deeper insight into Buttigieg and the circumstances not only of his career, but of the way he fits into the greater scheme of the political culture. Audiences will come to learn about Pete Buttigieg from Pete Buttigieg, but they will instead learn from Chasten.