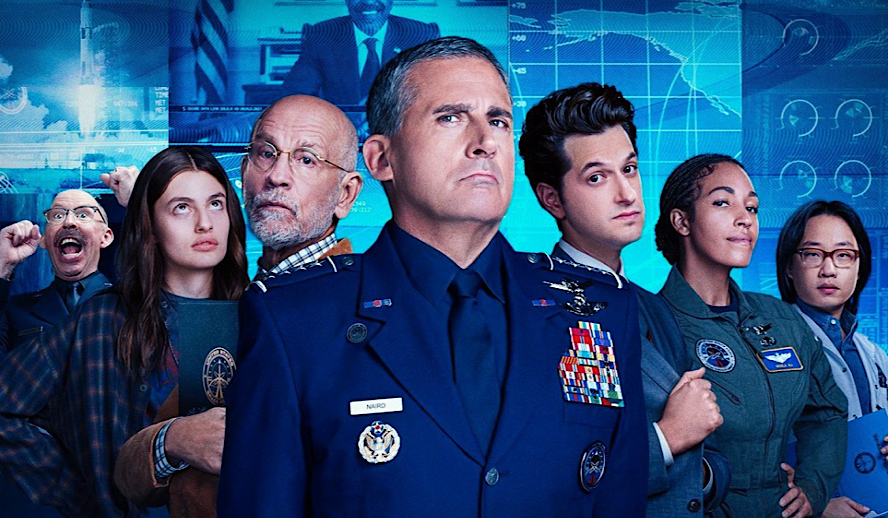 Season 1 of ‘Space Force’ premiered in 2020 and it had a rocky start with critics because of its uncomfortable humor. This show was created by Steve Carrell and Greg Daniels and it’s a workplace comedy centered on a group of people tasked with establishing the sixth branch of the United States Armed Forces, the United States Space Force. Critics compare ‘The Office’ to ‘Space Force’ because Carell plays the main character Mark Naird, they’re not completely the same character because Michael Scott is only the manager at Dunder Mifflin Inc. so he had limited power compared to Mark Naird who’s in charge of an entire service branch. Therefore, Michael’s actions only affected those in the office whereas Mark’s erratic behaviors could cost billions of dollars.

The first season feels like tonal whiplash because Mark’s behavior is toned down in the second half and there’s more focus on the supporting characters. Also, the show doesn’t know how to land jokes so it just comes off as awkward. The arc the show seems to stick to is the ongoing conflict between Mark and John Malkovich’s character Dr. Adrian Mallory who’s the Space Force head’s scientist, they balance each other out which makes the show worth watching. You can tell this show is still trying to figure out what it wants to be in the first season but that’s what makes season two better.

Space Force Season Two is Better than One

I know many people who watched season one didn’t expect it to get renewed because of the negative response it received. However, they took the criticism to heart and changed things because season two is more consistent than the first season because the show focuses on the supporting characters which makes it work better as a workplace comedy. The most drastic difference between the two seasons is the number of episodes, season one had ten, and season 2 had seven and it’s probably because the budget of the show was cut. You can tell the show is more focused on the comedy around the base whilst focusing on the characters’ bonds with one another.

When watching the second season, I immediately noticed that the creators decided to abandon the satire premise it originally had. The show now feels more like ‘The Office’ because it is focusing on the characters rather than the overarching plot. The characters they decided to focus on are Mark’s daughter, Erin (Diana Silvers) scientist Dr. Chan Kaifang (Jimmy O. Yang), Mark’s Second in Command, Brad Gregory (Don Lake), and Head Media Manager, F. Tony Scarapiducci (Ben Schwartz). Carell’s character Mark is still the main character of the show and they decided to tone down his character’s antics which makes the show more watchable.

The Storyline and Characters

Season two of ‘Space Force’ feels more down to earth because it found a good balance between satire and comedy. The show also changed the dynamic between Mark and Adrian making it feel more like a workplace relationship which is nice and entertaining to watch. I also love the dynamic between Dr. Chan and Captain Angela (Tawny Newsome) in season one because I love a workplace romance and I love the way the show is portraying their relationship, it’s a sweet and cute romance that will continue to blossom. The bromance between Dr. Chan and Tony are also nice to watch, seeing Tony be a wingman to Dr. Chan shows how much he cares about Dr. Chan’s emotions.

The show is watchable because of the characters’ relationships with one another, without it, the show will definitely fall flat. My favorite thing about the show is the characters and I keep watching to see how their character arc will progress. In the next season, the show should continue to make this a character-driven show instead of a plot-driven one because people would rather tune into the show that has memorable, lovable characters. The comedy does fall flat at times but I think it’s because my sense of humor doesn’t match up with the show. Therefore, if you enjoy workplace comedies like ‘The Office’ or ‘Parks and Recreation’, you’ll enjoy ‘Space Force’.

There seems to be a mixed response between the audience and critics of the show, with critics saying season 2 is better than one whereas the audience likes season one better than the first. Most fans of the show loved season one despite the criticism and are confused why the show changed so much from season one. The other half of fans are just Steve Carrell fans and they seem to enjoy both seasons because of their love of Steve Carrell. I think since the show has found what direction it wants to go, they can now focus on what the general audience is and give them a show they’ll love.

I know workplace comedies are not for everyone because they all have the same sense of humor so I feel like this show is trying to attract an audience who enjoys workplace comedies. This show shouldn’t try to be like ‘The Office’ because it wouldn’t work given the characters are not in a common workplace scenario that’s relatable. This is why I said that the show should put more importance on the characters rather than the plot. The creators should want their fans to return to the show so they can see how the relationships grow over the course of the show. I think it’s important for shows to listen to their fans because they’re the ones who determine if the show gets a second season.

If the show does get renewed for a third season, I believe it’s going to get better because they’re learning from their mistakes. Sometimes, shows have a rocky start and need to find their grounding but usually in the third season that’s when the show gains traction and starts being a success. If the show keeps appealing to the fans, then they’ll build a loyal fanbase who’ll watch the show till the finale. This show has the potential for being one of the next great workplace comedies, it’s important that they don’t lose momentum.