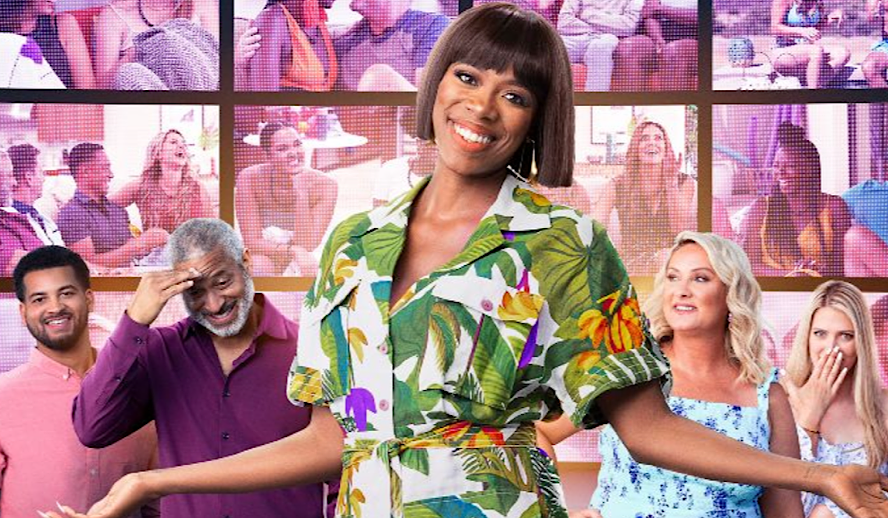 A Brief Introduction of the “Second Chance Retreat”

Taking the now-beloved ‘Big Brother’ and ‘Love Island’-esque luxury mansion surveillance format and littering it with a collection of attractive, single moms and dads ready to get back into the dating scene, ‘My Mom, Your Dad’ is an honest twist on the classic dating show blueprint. Yes, these parents are ready and willing nominees, but there are some pieces of the puzzle that they aren’t privy to at the start of the show, and that provide the juicy entertainment factor for us audience members.

The parents are not only nominated by their young adult children, but their kids are integrated into the story as so-called “dating consultants”; stationed in a second house just down the road, they have plenty of screens in every room for the kids to not only review cringe-inducing flirtation between their parents, but to actually have a hand in ‘turning up the heat’ for them in the first place.

Through making decisions such as who each of contestants get to go on dates with, exercising their power through game-appointed, romance-inducing instances of “meddle time” (the alert for this blaring over the speakers reminiscent of ‘The Circle’), and also utilizing the presence of a plant – their retreat manager, Jimmy – in their parents’ house to do their bidding, the kids quickly get used to their newfound power as somewhat of certified anonymous wingmen for their ready to mingle ‘rents. After the first few episodes of getting a good feel for not only the vibes of their parents, their connections, and the potential ways that they could be nudged in the ‘right’ direction, the game takes shape as – bear with me – a strange and somehow sweet experiment in love and relationships.

The Art of Awkwardly Matchmaking “MILFS” and “DILFS”?

Both the single parents and the kids face obstacles in regard to their romantic judgment and hangups, and this is what gives this 8-episode reality TV series the tension needed for us to keep watching. First impressions are everything, and the first season premieres with a small collection of seven parents (three men, four women) and their supportive kiddos who will, unbeknownst to the contestants, settle into their duties as the ultimate puppet masters. As the beginning connections are formed (like a sweet, blossoming romance between Troy and Karen) and the partners are evaluated (like the genuine chemistry but, in some ways, rightful uncertainty of Scott and Deneia), things start to get far more interesting.

For example, both MJ and Breanna express concern over the pace of their parents’ relationships, and sometimes, the nature of their chosen partner. It’s sometimes unclear whether the kids are giving their educated assessment, or they’re unhappy with the potential partner, or they’re just particularly uncomfortable with seeing how much game (no but really) their parents have on multi-angle, high-definition TVs. Nonetheless, this dissonance between their well-meaning, omnipresent opinion and the lived experience of their parents is a malleable point as more parents (and kids) enter the game, and threaten to complicate the original pairings.

Ultimately, the live-streamed realization by these kids that their parents are just as cute, awkward, and charming as teens and young adults when it comes to romance is a much-needed break from the petty, sometimes anxiety-inducing debauchery of other matchmaking shows set to college-aged. ‘My Mom, Your Dad’ isn’t some loose set up for psychological torture, it’s an easy-going, coincidentally televised avenue for some much-deserving singles and divorceés to mix and mingle with the fantastical resources of reality TV production.

Yvonne Orji, the Emmy-nominated actress who I instantly recalled from her appearance in ‘Vacation Friends’ last year, finds her footing as the charismatic host of this new show after the first few episodes. The show is produced and essentially created by Greg Daniels, the 5-time Emmy award-winning producer of shows like ‘Parks and Recreation’, ‘The Office’, and ‘King of the Hill’ and his daughter Haley Daniels in her first production credit (the first of many it seems if she’s to follow in the footsteps of her father) for their first unscripted project.

This increasingly makes sense as the series goes on, with a natural sort of cringe-worthy but the endearing comedic tone, and plenty of opportunities for these adult children to unintentionally learn more about the people that already feel so familiar: the way that they think and feel about their own experiences with love, articulated without the sometimes hindering parental filter that they would have if they were aware of their “special” audience.

“Who’s Idea Was it to Have Kids Meddle in Their Parents’ Love Lives?”

What ‘My Mom, Your Dad’ brings to the table that other, similar shows do not is the caring dynamic between the kids and their actions towards their mingling parents, and the sense of maturity practiced by the parents at every turn. While I love watching a bunch of 20-somethings become infatuated and subsequently repulsed with one another as much as the next girl, ‘My Mom, Your Dad’ distinguishes itself by placing good people at the center of a hopeful love story by those who care about them the most. As a good, clean spin on a concept that is becoming increasingly trite, this premiere season is enhanced by a likable cast of characters (on both sides) and a concept that, while unpolished, utilize the ‘dating show’ blueprint to a newer, more wholesome purpose than we’re used to, and it is much welcomed.

Fans of the host, Yvonne Orji, can look forward to her role in the new Netflix original animated series ‘My Dad the Bounty Hunter’, an action-adventure show featuring actors like Yvette Nicole Brown, Jim Rash, and Rob Riggle.