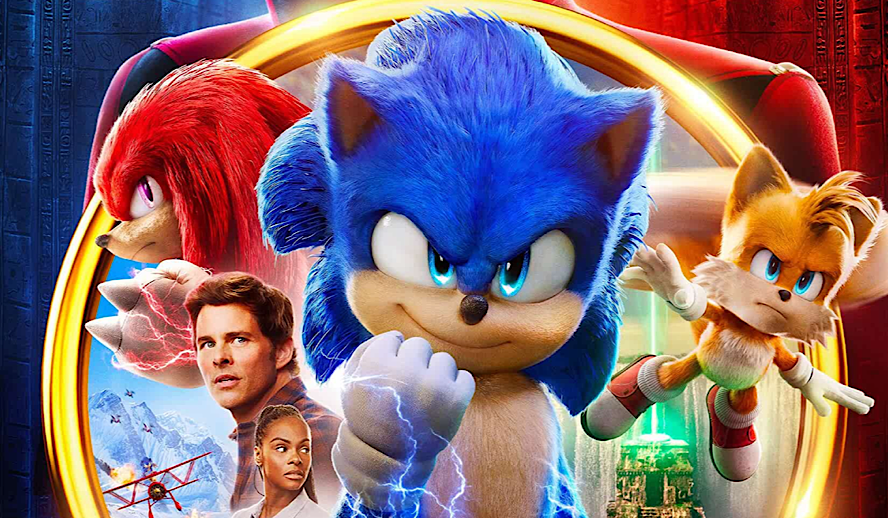 ‘Sonic the Hedgehog 2’–A Sequel’s Sequel

‘Sonic the Hedgehog 2’ is projected to race past its predecessor in box office numbers, having secured a clear first place against its competitors this weekend. The high-octane family flick kicks off when Dr. Robotnik (Jim Carrey) returns to Earth with Knuckles the Echidna (Idris Elba) to hunt down the supremely powerful Master Emerald.

The resulting movie feels overfull with flat comedic bits that weigh down a well-devised plot. The whole cast, as with the first movie, put on wonderfully entertaining performances. The scene ideas are zany and fun, cool references to Sonic games/shows abound (SPOILER ALERT for the linked article), and the core ideas of the script track pretty clearly throughout the movie: Sonic wants to be a hero, but hasn’t matured enough to do so responsibly, and he learns this by finally finding friends to have a meaningful childhood with. The majority of the movie works. What doesn’t work are the dozens of little moments that should have been left on the cutting room floor.

The first installment in the Sonic the Hedgehog movie franchise, running only 99 minutes, kept its story concise, energized, and packed with heart. Befitting its titular, supersonic character, ‘Sonic the Hedgehog’ did not waste any time and, in this reviewer’s opinion, managed to inject some new life into the formulaic blockbuster scene. With the average Marvel movie running just over 2 hours, something less presumptuous and more fun was a breath of fresh air despite being cliché.

‘Sonic the Hedgehog 2,’ while still a crowd-pleaser with some good laughs, chases, and clever scene setups, has some notable pacing issues. For instance, I have no complaints about seeing more of Natasha Rothwell as Rachel, the sister/sister-in-law of Sonic’s foster-parent figures Tom (James Marsden) and Maddie (Tika Sumpter) Wachowski. She is delightful in the role, and fully embodies even the most ridiculous dialogue. The scenes that feature her, however, seem to slow down the movie significantly, the reason being that even the main plot has one too many moments in each of its scenes.

Full Commentary on ‘Sonic the Hedgehog 2’

If the first Sonic movie is a clean run on a Formula 1 track, its sequel is an offroad adventure on a dirt bike. The soundtrack stops and starts like that one guy who, given the aux cord, shows you an entire playlist on the 5-minute drive to Walmart. Every fight has a beat where things really get started. It feels like hitting a series of speed bumps. Dr. Robotnik’s lines took the hardest hit from the change in pace. Carrey pulled off a genuinely startling performance in the first film with the support of dialogue that was corny, but eccentric and unexpected. The end credits scene of ‘Sonic the Hedgehog’ features Robotnik getting a kick out of throwing a rock from mushroom to mushroom, performing “rock-conaissance.” Any Robotnik lines of the same quality in ‘Sonic the Hedgehog 2’ keep company with uninspired pop culture references.

How to Pace a Franchise

Marvel and DC, take notes. SEGA and Paramount are nailing this. In contrast to the pacing problems of ‘Sonic the Hedgehog 2,’ the franchise as a whole has paced its reveals brilliantly. The fanbase is familiar with the core cast of Sonic characters, and those characters have persisted throughout game franchise history, so when one of them is revealed in the movies it feels like a welcome addition.

Superhero movie end credits scenes have become tedious. They often hint at onboarding a character who would open up a whole new corner of the comic universe, meaning anywhere from two to ten more movies in the saturated superhero market. Unless you’re a fan of each unveiled hero, it feels more like something added to a to-do list at this point than a payoff waiting to happen. In the case of Sonic, fans in the audience are slowly getting more of what they, specifically, are fans of. Maybe Sonic will wear thin after another movie or two, but so far, filling out the roster of fan favorites one by one is working wonders.

As mentioned before, the entire cast committed fully to this one. James Marsden and Tika Sumpter were just as lovely and grounded as in the first movie, making the human-to-CGI interactions way less disconnected than those often are. Jim Carrey makes it work despite the less-than-stellar dialogue. Lee Majdoub, Natasha Rothwell, and Adam Pally all reprised their supporting roles wonderfully. And Shemar Moore? Yes, please.

But this movie would simply not work if the voice we hear the most were not so animated and wildly entertaining. Ben Schwartz plays a wonderful Sonic, sincere but smart-alecky, childlike but cool. Enough cannot be said about his performance, and the actors joining him to voice the Sonic crew knocked it out of the park. Idris Elba’s voice as Knuckles instantly adds gravity to the movie, raising the stakes whenever Knuckles is on screen.

Colleen O’Shaughnessey, meanwhile, has been a favorite of Sonic fans since 2014, when she began voicing Tails. Her rendition of Tails was just as endearing on the big screen as in the games and cartoons where she has voiced him before. In fact, the Sonic fanbase fought for her name to be on the movie’s posters. Though she has had a prolific career as a voice actor, producers considered not listing O’Shaughnessey next to household names like Jim Carrey. When fans saw the first posters without O’Shaughnessey’s name on them, they caused enough of a stir to get the posters replaced with her name on them, a win for the fans, O’Shaughnessy, and the voice acting community as a whole.

Paramount has already confirmed a third Sonic movie, planned for release next February, and if the franchise can continue its hot streak it’ll be one to look forward to. Second movies frequently underwhelm and for a second movie, ‘Sonic the Hedgehog 2’ is pretty good. I recommend it if you’re up for family fun or if you’re a Sonic fan at all, at the very least for the joy of hearing a chorus of kids having the time of their lives.