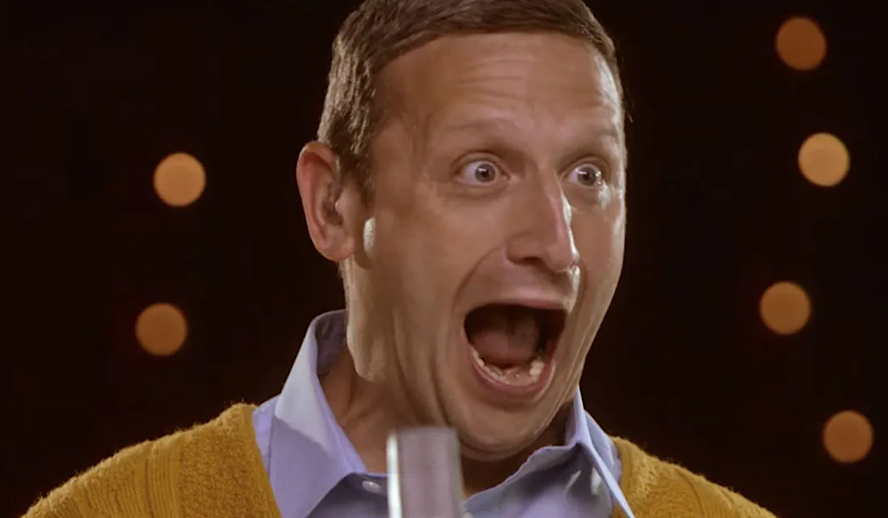 Photo: ‘I Think You Should Leave with Tim Robinson’/Netflix

When ‘I Think You Should Leave with Tim Robinson’ premiered in 2019, it instantly became a cult hit thanks to its quotable lines and memorable sketches. One couldn’t go on Twitter without seeing Tim Robinson, dressed like a hotdog, trying to convince a room that the hotdog car that crashed into the building isn’t his. The short span of the episodes, each being around fifteen minutes, allowed for many to constantly rewatch the first season, being able to catch missed jokes and memorize their favorite lines. Many hoped that the series wouldn’t be a one-season wonder, like the similarly surreal ‘the Dana Carvey Show’, and luckily that is not the case with the premiere of season two. Season two of ‘I Think You Should Leave’ offers sketches that are more chaotic and even more existential.

The Chaos of the Emotionally Unstable

Tim Robinson’s signature form of comedy can best be described as emotionally unstable. In his sketches, he is typically a man who is either caught in awkward situations or creates awkward situations. When he creates awkward situations (which is at least three times per episode), it is usually caused by his character getting set off by any small inconvenience, such as the first sketch of this season where his office puts off lunch for a meeting. He reacts to these small inconveniences like no socially adept person would, like hiding a hotdog in his sleeve during the meeting only to end up violently choking on it. In a Tim Robinson sketch, he is usually choking, screaming, crying, or even talking about horse cocks at a haunted house tour. You never know what is going to set him off or how his characters will react which is part of the humor, the anticipation of the reaction, and the shock that it never goes how you expect.

Tim Robinson isn’t the only emotionally unstable one this season, with plenty of guest stars losing their control such as ‘Shrill’s’ Patti Harrison, who loses it over dirty tables ruining her livelihood, and one of the kings of surreal sketch comedy, Bob Odenkirk, who shares his delusions of a better way with a confused Robinson and his daughter. Each character succumbs to their own emotions and insecurities, either reacting with rage or a solemn acceptance. One of the most existential sketches, being the last one in the season finale, showcases Claire’s ear piercing video, where mixed with girls explaining how fun earrings are, is an old man looking back at his life.

“It’s just hard seeing the people who raised you as a baby become baby themselves”, he says after a girl laments on how hard it was to choose between the fairy earrings and the dolphin ones. These are both some of the show’s funniest moments, shocking the unexpecting audience, and even the most cathartic ones, adding a slice of truth to these emotionally unstable individuals who ignore social norms.

Part of the appeal of both seasons of ‘I Think You Should Leave’ is how many of the sketches break the rules of social norms, rules we don’t even question. This is especially done by the characters of Tim Robinson, as his socially inept weirdos believe they are just doing what everyone else is doing only for the results to screw up. This is achieved in one of the funniest sketches, where while the boss is gone at the office, one coworker jumps on the table and pretends to surf. Everyone laughs and Robinson, wanting to join in on the fun, screams “here comes the wave” only to flip the table over, causing everyone to get hurt. This can also be seen in one sketch where Robinson tries to cheer up a fighting couple by recreating a dance from ‘Blues Brothers’ only to end up almost getting attacked by their dogs. At the end of a Robinson sketch, the room is either angry or bewildered at his actions with Robinson believing that he isn’t any different from anyone else.

One can’t help but watch these sketches while holding their sides with one hand and covering their eyes with the other, feeling both the hilarity of the situations but also cringing at the awkwardness. It’s cringe comedy at its finest, where the audience cringes like a turtle going in their shell, knowing the results will be disastrous, but they can’t turn away from the disaster. The outcome of a lot of the sketches is like watching a public meltdown, where you know it’s not going to end well for anyone involved but yet you can’t help but watch, wanting to see just how it plays out and feeling lucky that at least you’re not that off. Some sketches of ‘I Think You Should Leave’ give the audience the same uncomfortable yet morbid curiosity of seeing people throw social norms out the window by reacting to a situation the exact opposite way of how you would.

Coffin Flop and the Surreal Side of Comedy

‘I Think You Should Leave’ also leans more towards the surreal this season, which says a lot considering the first one gave us such gems as ‘Bozo Dubbed Over’. The surreal sketches of this season work best when they are dark and unexpected. Like the fake tv show ‘Coffin Flop’, which is just footage of dead bodies falling through the bottom of their caskets, sometimes even naked. Like the alt-comedy legend, Tim Heidecker, heckling an animatronic comedian at a science fiction-themed bar. Like Detroiters’ Sam Richardson hosting a competition of buff little boys. The surreal sketches, often focussing on characters who are fully at one with their weird interests or career, provide the biggest laughs.

The dedication these characters have to their surreal environment is what makes the humor soar, with the characters often trying and failing to sell the audience on their ludacris ideas. It’s hard not to laugh at both the absurd ideas themselves and the character’s passions. That these ideas are brilliant. Seeing Tim Robinson yell at you about why you need to save Corncob T.V so you can see more episodes of ‘Coffin Flop’ both balances the absurdity of the idea with the sheer passion the character has for it, not only cracking us up but making us kind of want to see more installments of dead bodies flopping out of coffins.

While this season of ‘I Think You Should Leave with Tim Robinson’ seems to have fewer sketches than last season, with some sketches running a little longer this time around, this season still offers the same breed of chaos and absurdity that fans loved about the first season. The sketches are brilliant in their absurdity, always being two steps ahead of the audience. The choice of guest stars is fun and gives some of the series most memorable performances, like frequent collaborator Conner O’Malley. Like the first season, this season excelled in its showcase of emotionally unstable people breaking the rules of social norms during the most surreal of situations.