‘Santa Inc.’ Adds Some Much Needed Fun To The Naughty List 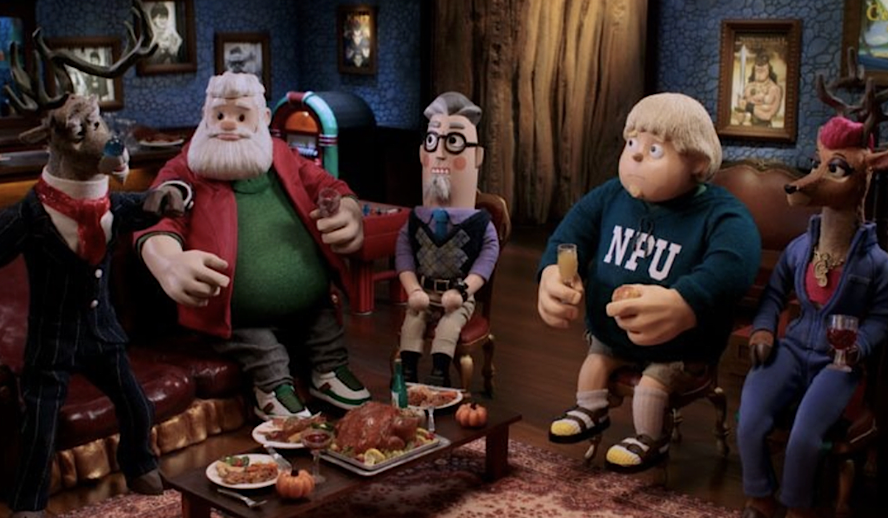 ‘Santa Inc.’ may have been marketed as just another raunchy and foul-mouthed cartoon, especially since it is produced by ‘Robot Chicken’s’ Seth Green, but the eight-episode series has much more to offer. ‘Santa Inc.’, created by ‘Shrill’s’ Alexandra Rushfield, is a fun and often savvy satire of the corporate world that smartly uses the Santa Claus mythos as a backdrop. The series follows an elf, Candy (Sarah Silverman), who aspires to be the first woman Santa Claus as Saint Nick (Seth Rogen) must pick a new successor. With a story like this, one can already tell what types of modern-day aspects the show will take jabs at. ‘Santa Inc.’ is a successful satire and a holiday special that will please many.

What Works About ‘Santa Inc.’

It is easy to see how ‘Santa Inc.’ takes inspiration from many holiday specials, mainly the stop motion specials of Rankin/Bass. This inspiration gives ‘Santa Inc.’ a unique art style that separates it from the other adult animated cartoons. The art style also leads to many brilliant character designs throughout the show, one of the highlights being the gingerbread character design of Cookie (Leslie Grossman) with her frosting hair and stiff movements. The same can be said of the settings of the series with one of the highlights being Easter Island, the land of the Easter bunnies, which looks like something out of ‘Midsommar’ with its pastel colors and flowers.

One of the most compelling aspects of ‘Santa Inc’ is its protagonist, Candy, an ambitious Jewish elf who wants to become the first woman elf. Candy is an engaging protagonist since her goal is clear and the obstacles are even clearer. Candy wants to be Santa Claus but every Santa Claus has been a white man (except for the one black man that was supposed to be next in line, which becomes a funny running gag). Candy’s optimism and ambition make her a likable character and her dry sarcasm leads to some of the funniest jokes in the series. Not only is Candy a likable character, but she is also relatable, especially to women in the workforce. Candy’s character is really the heart of ‘Santa Inc’ and is what helps create much of the show’s satire.

‘Santa Inc’ succeeds as a post-Me-Too era corporate satire. Santa Inc, the company not the series, is a boys’ club where Rudolph Jr (Craig Robinson) verbally berates women and the men have beard shaving parties. While the boys are out playing though, the girls face struggles at work from Cookie not having a proper maternity leave to Goldie (Gabourey Sidibe) having to sit out while the other reindeer pull Santa’s sleigh. Santa Inc. has some serious problems behind its peppermint-scented walls and Candy sets out to be the change, the step in the right direction. In order to do this, though, Candy has to participate in the corruption herself though and rub elbows with the very people who are trying to hold her back. In one stand-out episode, Candy joins Santa and the Board of Christmas for a vacation getaway, which includes the typical things we associate with rich guys outings (golf, cigars, sex jokes, you get the idea).

The voice acting in ‘Santa Inc’ is enjoyable with most of the cast being made up of comedians. Sarah Silverman brings a sly dirtiness and enthusiasm to Candy that makes her a stand-out protagonist. Seth Rogen, on the other hand, is a jolly yet very flawed Santa Claus. Rogan plays Santa Claus like a well-meaning but flawed boss, a man who is successful yet tired. This is best seen in the third episode, where Santa tries to relive his college days while ignoring the chaos of the office. There are other great guest appearances, such as Maria Bamford, Tim Meadows, and Patton Oswalt.

What Doesn’t Work About ‘Santa Inc.’

‘Santa Inc’ has the same problem that many other adult animated series have such as ‘F is for Family which is that not all the jokes work. Many adult animated series feel as though since they are animated then they have more room to be raunchy and foul. While animation gives comedians a way to be more chaotic than ever thanks to its endless possibilities, this doesn’t mean that it will be funny. ‘Santa Inc.’ blends raunchy humor with its smart satire, from showing reindeer on meth to having Santa “nutting”, but these jokes don’t feel shocking nor that funny. These jokes often rely on the fact that Christmas characters being raunchy is inherently funny but in an age after the likes of ‘South Park’ and ‘Big Mouth’, it takes more than shock to leave the audience with a reaction. It takes more than showing Prancer and Dancer in rehab to elicit a laugh.

This isn’t to say that ‘Santa Inc.’ isn’t a funny series. There are a lot of jokes and running gags throughout the series that succeeds. One of the best running gags in the series is how often Santa brags about almost picking a black man as his successor. The jokes that work best in ‘Santa Inc.’ are the jokes that act as satirical clapbacks to the corporate world. These jokes, from Santa’s pseudo-fake wokeness to Candy’s droll remarks towards constant sexual harassment, are the funniest in the show. On the other hand, the raunchier jokes that rely on the punchline being that it’s shocking to see an elf’s penis are the weakest since they are not as clever and aren’t really shocking. While this humor may turn some viewers away, there are plenty of smart jokes throughout the series as well as a clever satirical edge.

‘Santa Inc.’ is more than what meets the eye. It may seem like just another raunchy adult cartoon but it is also a smart satire that takes aim at the sexism of the corporate world. This satirical edge makes the show an entertaining and worthwhile watch. Using the North Pole as a stand-in for the corporate world leads to some funny ideas and only adds more to the humor’s bite. The series acts as a fun homage to the stop motion innocence of Rankin/Bass which gives the cartoon a unique and eye-popping art style that can be seen with its character designs and even some of its settings. While not all the humor works, the series is an overall enjoyable and naughty time.