‘F is for Family’ Says Farewell 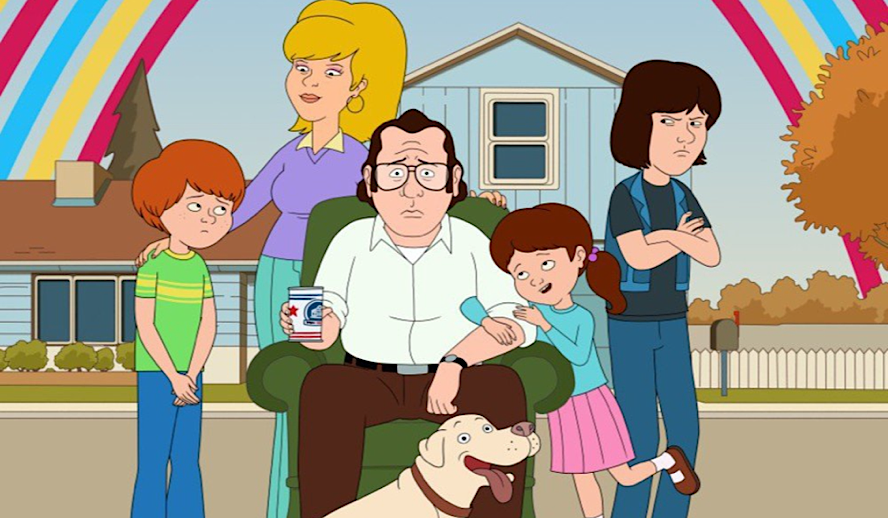 Photo: ‘F is for Family’

‘F is for Family’, created by Michael Price and Bill Burr, is underrated. The series, which first aired in 2015, was unfairly labeled by many as a “ ‘Family Guy’ knock-off” due to its use of profanity and for some of its character designs. While the series may have been unfairly judged upon release, ‘F is for Family’ proved to be a humorous and even profound portrayal of American life throughout its five-season run. The series follows the dysfunctional Murphy family in the nineteen seventies. Now, after almost six years, ‘F is for Family’ is coming to end with forty-four episodes under its belt. In its last season, the series nicely wraps up its storylines and themes, satisfying both fans and newcomers.

‘F Is For Family’ – What Works This Season

Season five of ‘F is for Family’ takes off where season four ended. The patriarch of the Murphy household, Frank (Bill Burr) is just beginning to forgive his abusive father, Big Bill (Jonathon Banks) but Big Bill soon dies of a heart attack. Now, in season five, Frank tries to make sense of his father’s cryptic dying words while his family deals with their own problems which includes his wife, Susan (Laura Dern) trying to make amends after outing her brother and their son, Bill (Haley Reinhart), entering a scared straight program. As the family deals with their own problems, Frank’s close friend, Rosie (Kevin Michael Richardson), is elected as his neighborhood’s alderman but struggles to prevent his neighborhood from being torn down.

While this may seem like a lot of stories to keep up with, the show expertly balances each subplot throughout its eight-episode season. One of the highlights of this series has always been its well-told story which carried into each episode. While ‘F is for Family’ could have easily been a foul-mouthed episodic sitcom, it instead has successfully been a serialized dramedy where each episode acts as its own chapter. Frank’s story is perhaps the strongest of this season with the biggest payoff. Frank has always been a rich and complicated character, where he longs to be a good father but is constantly hindered by his anger and resentment. In this season, we really see him grapple with the complicated relationship he has with his father and how he tries to do better with his own kids.

‘F is for Family’ fifth season is a thoughtful look at forgiveness, from Frank trying to forgive his father to Susan seeking forgiveness from her brother. This theme is beautifully expressed throughout the season, showing how complicated family dynamics can be and how forgiveness isn’t always easy. The show also delves into the idea that some people can’t and shouldn’t be forgiven. In one of the best scenes of this season, Bill is doing a ride-along with two police officers as part of the scared straight program. During this program, Bill starts to idolize these offers but during the ride-along, they pull over Rosie while he is with his daughter. Bill not only witnesses racial discrimination but sees how the police officers are no better than the schoolyard bullies that he always deals with. Moments like this prove that ‘F is for Family’ is more sophisticated and thoughtful than it is truly given credit for.

One of the best aspects of ‘F is for Family’ has always been how it portrayed the working-class struggle. Frank is a grounds manager of a local airport and the family practically lives paycheck to paycheck. The show offers an authentic perspective not only on working-class life but on American life in general. Take, for example, the series-opening theme, which is perhaps one of the best-animated opening themes in years. In the opening, Frank graduates college and soars in the air like his character’s dream of being a pilot. This is when real life starts to hit him. Draft notice, baby bottles, overdue bills, money, and dreaded work manuals. The opening symbolizes what entering adulthood is really like, where you start out with these big dreams, but they are all soon halted by reality.

One of the most authentic parts of this season, in particular, is how it represents problems that are specifically relatable to working-class people. This is mainly seen in Frank’s story. After the airline merges with another airline, the company faces budget cuts and new management, Alaquippa Ed (Joe Pera). Frank’s miserable job that he just sticks with to survive becomes even more miserable. This is all made worse when the employees find out that they must compete with one another in order to earn a Christmas bonus.

Throughout this time, Frank spends more time at work for little money or appreciation. He believes that all this extra work will mean that he’s up for the bonus, but his plans soon come crashing down. Afterward, in the final episode, Frank doesn’t answer the phone from work and instead eats dinner with his family. This moment is so pinnacling because oftentimes work will make one choose between their own happiness and the potential of getting recognition. At this moment, Frank chooses happiness for the first time, bravely rebelling against the corporate cycle.

What Doesn’t Work This Season

This isn’t necessarily a bad thing, but oftentimes these jokes aren’t nearly as funny as the more thought-out jokes or are just predictable. Again, though, humor is subjective and while this writer may not be a fan of jokes at the expense of overweight prostitutes, you might be. This also isn’t to say that ‘F is for Family’ is unfunny, there are many funny jokes throughout this season as well as jokes that have run through multiple seasons (the holes in the condom joke has even created some hilarious storylines). ‘F is for Family’ has a “throw anything at the wall and see what sticks” joke structure and oftentimes more slide off the wall than stick.

The last season of ‘F is for Family’ tells a compelling and often heartfelt story on forgiveness while being an authentic portrayal of American life in the nineteen seventies. The season works as the perfect final season for the series, letting audiences catch up on their favorite characters while even getting hints of how minor characters are doing from past seasons. The show wraps up in a clean bow, satisfying fans of the series while still making them wish that the series wasn’t so abruptly canceled. While not every joke works, the jokes that do land are often either very clever or even lead to hilarious results. The height of this season along with the series itself really is its heart. Underneath all the chaos and swear words, there really is a lot of heart hidden underneath, just like a real family.

‘F is for Family’ is available to stream on Netflix