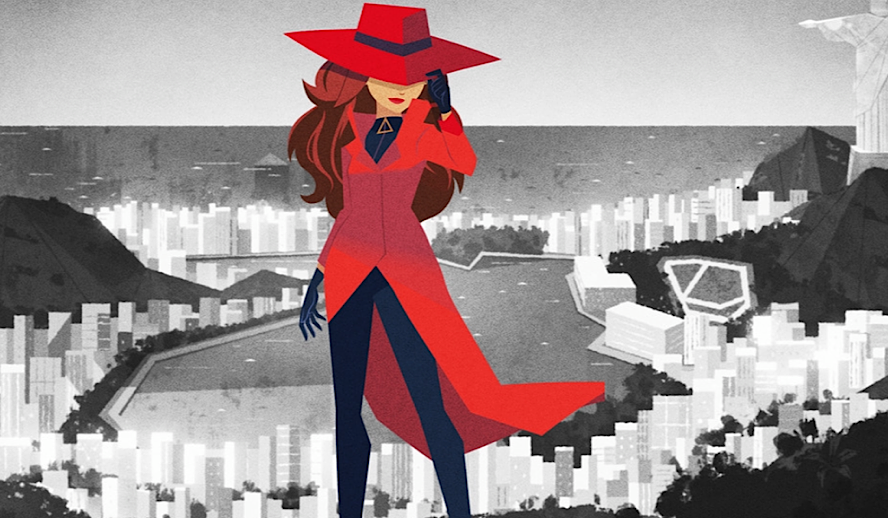 ‘Where in the World is Carmen Sandiego?’ Opening up the computer and popping in this favorite game is a treasured childhood memory. As a child of the 90s, I spent many hours playing as a secret agent for the mysterious A.C.M.E. organization, hunting down the operatives of an agency named V.I.L.E. which was headed by the elusive Carmen Sandiego. So, like many other millennials, I was thrilled to hear that the red-coated villainous would be given new life in a Netflix animated series. Except for this time, she’s not only the main character – but she’s also the good guy.

Carmen Sandiego didn’t start out as a hero. The red-clothed character’s origins were as a villain, originating in Broderbund’s 1985 video game ‘Where in the World is Carmen Sandiego?’  The game’s ‘Player’ worked their way through various V.I.L.E. operatives until they reached the crafty mastermind orchestrating it all – Carmen Sandiego. While the game was not designed to be educational, the clues based on geography and history made the experience a big hit in schools and would become an important staple of the franchise.

The game was one of Broderbund’s most successful endeavors, and a decade later would become the basis for the animated series, ‘Where on Earth is Carmen Sandiego?’ This incarnation still had Carmen as the head of V.I.L.E., but with a stricter code of morals who stole for the challenge of it as opposed to evil intentions. This series added a background for the character as a former A.C.M.E. agent who has long since left the agency. The show is somewhat unusual in that it dips into the second person, using a faceless Player (the only live-action character in the series) as the protagonist and audience surrogate. The Player ‘chooses’ A.C.M.E. agents, such as siblings Zack and Ivy, to hunt down and capture Sandiego and return her stolen goods to their rightful places.

A New Take on the Character

The franchise was given a significant makeover in 2019 when Netflix produced an original series, ‘Carmen Sandiego’, created by Duane Capizzi. This take on the popular character transferred her not only from villain to anti-hero status but into the role of the protagonist. Player (Finn Wolfhard) remains a steady voice in Carmen’s ear but is relegated to the sidelines to let Carmen take center-stage. Gina Rodriguez (‘Big Mouth’, ‘Jane the Virgin’) takes on the mantle (and the stylish red hat), jet-setting around the world and avoiding both A.C.M.E. and V.I.L.E. as she strikes out on her own path.

Other characters from the previous incarnations are given new life two, with A.C.M.E. agents Zack and Ivy turned into Carmen’s support crew as opposed to her opponents. The Chief of A.C.M.E., who has alternated between being depicted as a man and as a woman, is given a more human personality and even a name – Tamara Fraser (Dawnn Lewis). A number of our favorite villains from the franchise also make a comeback, notably Liam O’Brien of Critical Role fame taking on Dr. Gunnar Maelstrom, who was previously voiced by Tim Curry.

The now completed series churned out four seasons and an interactive special during its two year-run, which would be impressive if the third season didn’t feel somewhat rushed with only five episodes. Still, the series overall packs a lot into every episode, giving us a world tour and a kid-friendly geography lesson to boot. There’s an interesting enough over-arching plot in Carmen’s search for her lost mother, a few twists here and there, and high stakes as both A.C.M.E. and V.I.L.E. attempt to hunt Carmen and her team down.

Made for kids – and mostly kids

Many of those who grew up with the character in the 80s and 90s were excited to see this icon grace our screens once more. However, this show isn’t for us and definitely skews young. The overall plot of the series is sustainable, but with twists that will be seen a mile away, not to mention the rather obvious learning content shoehorned into each episode. Despite Carmen’s anti-hero status, the show is pretty black and white in its depiction of morals. (You know, if the Agency to Classify and Monitor Evildoers (A.C.M.E.) and the Villains International League of Evil (V.I.L.E.) weren’t enough of a tip-off for you).

The villains are a fun array of colorful campiness, but never stretch beyond cardboard cutouts of cartoon evil, and most of the side characters aren’t any better. You have to look no further than the interactive special, ‘Carmen Sandiego: To Steal Or Not to Steal’ for evidence of this. Players/viewers are punished for not cooperating with allies and foes alike, including being denied the choice all together between helping a choking opponent and going after the treasure Carmen is trying to attain. The only way to get to the end of the special is to play nice.

All that said, this is a perfectly enjoyable and competent show for kids, but it feels as though it missed the boat somewhat by not stretching to capture that adult audience as well – especially with the ready-to-go nostalgia bait. It’s been proven that this can be done – just look at ‘She-Ra and the Princesses of Power’, ‘Kipo and the Age of Wonderbeasts’, and ‘Steven Universe’. These shows found an adult audience through complex characters, engaging relationships, and shifting ideologies of right and wrong.

Even ‘Kim Possible’ – another popular female-led action cartoon, which ‘Carmen Sandiego’ has often been compared to – managed to show the cheerleader-turned-crimefighter struggling internally, rather than just externally. Carmen has plenty of outside struggles but seems confident in her character and goals throughout the show. Perhaps they’re saving a more engaging character arc for the live-action movie, in which Rodriguez will reprise her role. The film was set to be released in 2020…but so was ‘Black Widow’, ‘No Time to Die’, and ‘A Quiet Place Part II’. Fingers crossed for 2021 being a better year for Cinema.

All in all, Carmen Sandiego is good fun. While maybe not designed for the generations that grew up with the iconic character, it is competently introducing her to a new one. The characters are camp, the animation is gorgeous, and just try getting that theme song out of your head.

All four seasons of ‘Carmen Sandiego’ are now available to view on Netflix.