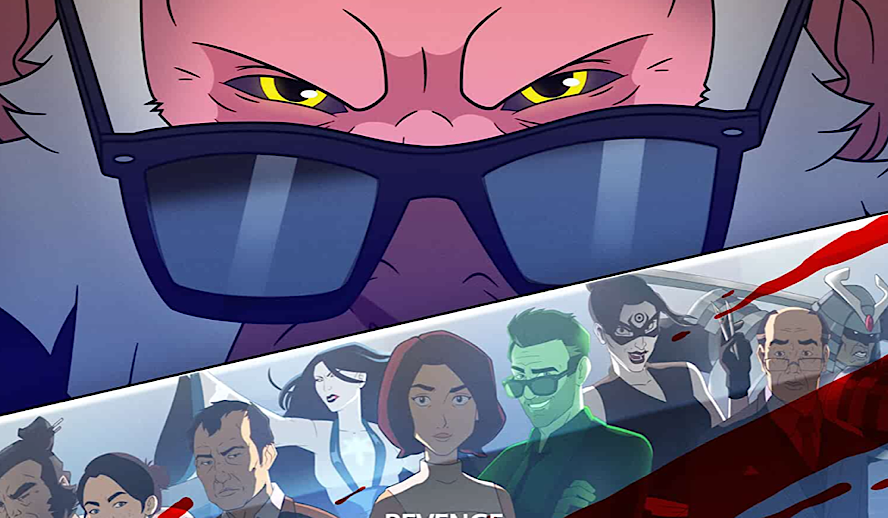 ‘Hit-Monkey’ takes the ‘Kill Bill’ route by following a revenge plot. After a hitman, Bryce, (a snarky Jason Sudeikis) is murdered along with a village of monkeys, a Japanese macaque (Fred Tatasciore) seeks revenge with the help of Bryce’s ghost. That’s right, the main duo of the series is a Japanese macaque and a ghost that only the monkey and a wise monk can see. The duo takes down the Japanese crime world during their quest to find the man who put out a hit on Bryce. This story offers plenty of action and blood. ‘Hit-Monkey’ will please any fan of action movies with its action sequences that rival that of ‘John Wick’ in terms of blood and well-choreographed fight scenes.

The series isn’t just a wild action rollercoaster about a monkey, but it is also a political thriller. In the pilot, Bryce is hired to kill a progressive politician. After he succeeds, the politician’s right-hand man, Shinji Yokohama (George Takei) decides to run with the help of his headstrong niece, Akiko (Olivia Munn). While their plot may seem out of place during the first two episodes, their storyline becomes one of Marvel’s most exciting and heart-wrenching. Their presence offers a compelling look at the consequences that Bryce’s actions have and their story acts as an interesting commentary on the corruption of election campaigns.

Despite its absurd premise and snarky attitude, showrunners Josh Gordon and Will Speck know how to keep the audience captivated. The series’ story is a high-stakes adventure that will keep audiences on their toes. It would be easy for a show this absurd to lose its audience with its mere concept alone, but by the series’ halfway point, the audience really feels for the characters and wants to see what is going to happen next. The audience especially feels for Hit-Monkey, who even develops a code of conduct in his quest for revenge. Unlike many action films and series, human lives in ‘Hit-Monkey’ aren’t disposable. Each kill has emotion behind it (or comes back to bite the characters in the ass). This emotion is especially seen with Bryce, who despite masking his guilt with humor, is now on a mission for redemption after realizing how corrupt his last hit was. Yeah, this series is more than just “monkey John Wick”.

One of the highlights of ‘Hit-Monkey’ is the dynamic between Bryce and Hit-Monkey. The two are surely an odd couple, with one being a snarky ghost with a dark past and the other being a monkey who is prone to making impulsive decisions. While Hit-Monkey doesn’t speak (he is a monkey after all, don’t be silly), Bryce makes up for this with his snarky reactions to the monkey’s grunts and hisses. Jason Sudeikis is perfect as Bryce, with his dry humor and sarcasm leaping off the screen. His reactions to Hit-Monkey’s animal-like behavior make them a perfect buddy comedy duo. Think if ‘Turner and Hooch’ met ‘Rush Hour’.

The series also smartly uses the ghostly powers and limitations of Bryce to the story’s advantages. One of the highlights of this is in episode three, ‘Legend of the Drunken Monkey’. In this fun episode, Hit-Monkey gets caught up in the world of gambling at a casino. Bryce, an expert at the fun and depressing casino lifestyle, mentors Hit-Monkey in the art of poker. Since Bryce is invisible to everyone but Hit-Monkey, he is able to look over each poker player’s shoulders and tell Hit-Monkey when he should and shouldn’t fold. It’s a fun sequence which not only shows Bryce’s relationship to the ape but acts as a genius way for the show to use Bryce’s new ghostly powers.

The series’ big villain, Lady Bullseye (Reiko Aylesworth), is one of the best that Marvel has to offer. She is an assassin, but unlike Hit-Monkey and Bryce; she has no code of conduct and loves what she does. This isn’t just a job to her. Killing is an act of pleasure. She doesn’t just kill people she is assigned, she’ll just kill anyone who bothers her, from an annoying flight attendant to a creepy man at the bar. Her fight sequences are some of the most captivating and this is thanks to the series’ great animation. The animation of the series is very similar to that of an anime which helps make the character look realistic while also popping off the screen. This animation style also works best for its fight sequences, having the characters flow with ease and grace.

‘Hit-Monkey’ is sure to please any die-hard Marvel fan. The series is more so for the comic book fans rather than Marvel movie fans with its references and rogues’ gallery. There are some references that Marvel movie fans will get, such as a reference to big bad guy Kingpin, but then there are lesser-known members of the rogues’ gallery-like Fat Cobra, Ogun, and Silver Samurai. The last two will especially excite X-Men fans since they are villains of Wolverine. Does this mean that Wolverine will soon make an appearance? Does this mean that the X-Men are in for their own series? While these questions will excite fans, ‘Hit-Monkey’ gives Marvel fans enough fun and excitement until they get any answers.

‘Hit-Monkey’ is a fun and energetic ride that will excite many, from Marvel fans to action movie fans. The series may be absurd and wild, but this never hinders the high stakes and often emotional story. Hit-Monkey and his ghostly mentor make great protagonists, with both of them working as a funny odd couple duo to both of them dealing with their own demons. While it would have been easy for this series to just be a raunchy and violent comedy, Josh Gordon and Will Speck go above and beyond to create a series that is truly different from anything else on television.

‘Hit-Monkey’ is available to stream on Hulu

Showrunners: Josh Gordon and Will Speck