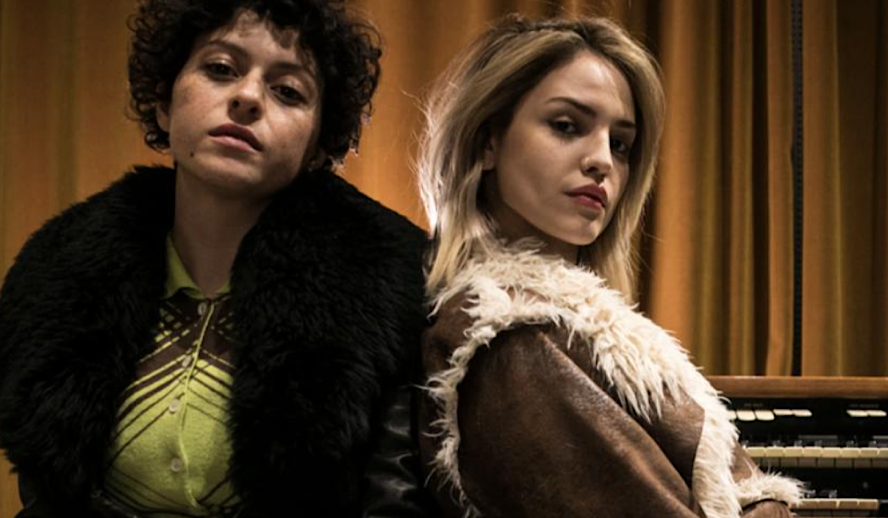 Writer-director Jamie Adams heads the newest film from Dignity Film Finance in ‘Love Spreads’, a supposed comedy about fictional band Glass Hearts. Though advertised as a comedy, ‘Love Spreads’ leans more toward a traditional drama with elements of documentary-style filmmaking involved. The movie centers around the three girls in Glass Hearts, along with their manager Mark (Nick Helm). The entire plot rarely leaves these girls, specifically their frontwoman Kelly (Alia Shawkat) as she struggles to write their sophomore album.

After a super successful debut album, the Glass Hearts understand how much is on the line. However, egos collide and result in their guitarist leaving until a brand new one is brought in. The new guitarist Patricia (Eiza González) is helpful but ultimately falls into the background in favor of Kelly. At the core, Kelly is designed as a diva with ideas of grandiosity. The premise of the film is wonderful, but unfortunately, the performances are not enough to lift the writing.

One of the biggest cons about ‘Love Spreads’ is its apparent identity crisis. While originally advertised as a comedy, the jokes fall flat more often than not. The main cause for humor is the relationship between Mark and Kelly, but it seems like they’re running in circles around each other. There’s ample opportunity for jokes, yet the writing doesn’t support that. The best moments in the film are light-hearted conversations that often flow more easily than the rest of the dialogue, though those moments are still few and far between.

The entire plot of the story revolves around Kelly and her bandmates and rarely strays from them. Because of this, there are few subplots or any exploration of their lives outside of the band. The most information we get from the ensemble cast is a few scenes with Mark’s family, humanizing this person we have villainized. This style would work better for the story if there were higher stakes. Sure, Kelly has a deadline and sure, their band will be dropped if they can’t complete the album in time, but it doesn’t feel like that. It seems like a lot of time is wasted on uncharismatic characters, as well as delving into smaller factoids. While the centralized plot does allow the film style to experiment, specifically using documentary techniques, the characters and writing aren’t enticing enough to make it work.

‘Love Spreads’ – More About The Stars

Alia Shawkat helms the film and has been a successful actress since she was a child. Some of her earliest work was on the show ‘Arrested Development’ and since then she’s been in over 90 productions. Born to an Iraqi father and a European mother, it’s refreshing to see a women-of-color as the star of a film. One of her first films was also alongside actor George Clooney and she’s been in a number of supporting cast roles for A-list actors and actresses. Since her career started in 1999, Shawkat has been busy at work and starred in a variety of films that garnered mainstream attention like 2019’s ‘First Cow’. Shawkat is undoubtedly the biggest name, but one of her co-stars also brings a lot of attention to this film.

Eiza González is also a huge name for the film and while she’s been in the industry less than Shawkat, the former only has 20 or so credits to her name, she’s had extremely successful roles in the last few years. One of her most notable roles was as Darling in Edgar Wright’s ‘Baby Driver’ and her career has only flourished since that role. She’s starred in films such as ‘Fast & Furious Presents: Hobb and Shaw’ and was a supporting actress for Rosamund Pike in ‘I Care A Lot’. Like Shawkat, González is a woman-of-color and one of the main characters in ‘Love Spreads’. While there are flaws in Adams’s movie, it’s amazing to see women-of-color finally in the spotlight of mainstream films and not pushed to the side in favor of white, male characters.

A large portion of ‘Love Spreads’ is about these girls and their lives as rock stars. On paper, they look like classic rock stars. They’re decked out in fur-lined jackets and leather, along with outrageous, brightly colored clothing. They wear sunglasses indoors, sport messy hairstyles, and often have dark makeup that accents their features. However, there’s an aura of celebrity that’s missing in the film.

From the information we’re fed, we know that Glass Hearts are a widely popular band. It’s hard to feel that same sense of awe we’re supposed to feel, when they seem to talk the talk without walking the walk. The movie itself is fairly laid back, which is where the documentary aspects come into play. For a lot of the film, we’re omniscient watchers, unable to interact with the characters and instead just watching their lives unfold. The lighting in the film is naturalistic and intimate, creating a feeling that we’re in the studio alongside them.

While the intimacy of the film makes us want to get closer to the characters, there isn’t enough tension or drama to engage us fully. Since they use a documentary-style, the editors and director don’t create conflicts or anything. This style may be entertaining for some, but for a fiction movie it falls flat and at times moves extremely slow. The runtime of the film is just over 90 minutes, a saving grace to make sure the story doesn’t drag on. Although there are many cons to this movie, Shawkat’s acting and her interactions with the other characters is enough to carry most of the film.

‘Love Spreads’ is available to watch on VOD.