‘P!nk: All I Know So Far’: Divine Feminine Energy in the Powerhouse Rockstar and Mother Named Pink 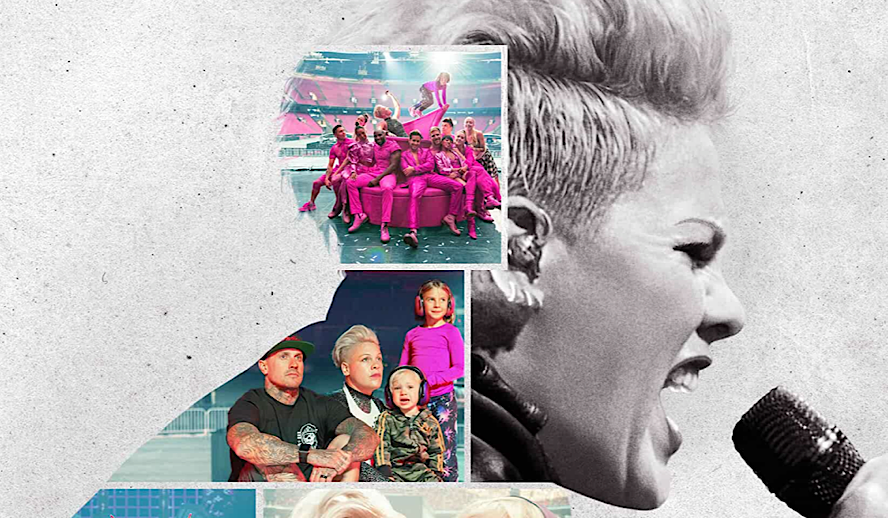 Photo: Pink in ‘P!nk: All I Know So Far’/Amazon

‘P!nk: All I Know So Far’ starts off with a bang – with an explosive, fitting performance of Pink’s iconic song, Get This Party Started. A vibrant and unrelenting performer, audiences are introduced to the star persona of Pink in a fun atmosphere, as she captivates thousands of fans in an enormous stadium. But then, the documentary quickly transitions into Pink’s personal life as a mother, setting up an important dichotomy for the film – her dual identities of Mother and Rockstar.

This dichotomy is explored in the nearly two-hour documentary, with the idea that both are essential to Pink’s identity and are not mutually exclusive. Through the lens of her 2019 Beautiful Trauma World Tour, the documentary explores Pink’s upbringing and experience balancing the rockstar persona as Pink (Pink), and personal identity as Alecia Beth Moore (her given name).

‘P!nk: All I Know So Far’ – Motherhood as a Blessing

Early on in the documentary, Pink says, “I enjoy getting up and getting to experience the world with my kids… just as much as I enjoy nailing it on stage.” And, very simply, that is the singular theme of ‘Pink: All I Know So Far.’ Pink is a mother to two children, Willow and Jameson, but she’s also a full-time artist, touring on stage. As she surmises, it’s unusual for female artists to undergo this lifestyle. Usually, when you become a mother, you must give up that strenuous, stressful rockstar lifestyle. If not, balancing those two responsibilities tends to prove impossible, if not impractical.

But Pink refuses to give up her musical career. It’s a part of who she is, and if fans know anything about Pink, it’s that she is overwhelmingly authentic and honest in striving to be exactly who she is. So instead of leading two different lives, she says “everything is melded into one, which is both beautiful and incredibly overwhelming.” She also has the help of her husband, Carey Hart, a professional motocross competitor turned father. Altogether, the family of four adopts a nomad lifestyle in order to support Pink’s professional aspirations.

However, what’s surprising is that Pink makes it look easy. Through backstage footage of the tour, we see her being incredibly playful with her kids, always keeping a cool attitude. She invites them into her creative process – allowing them to gallivant on stage and become a part of the pop music team. She also takes the time to oversee their development – teaching them good manners and new words.

Fans also get some insight into Pink’s personal relationship with the idea of motherhood, and the generational trauma that comes with it. She reflects on her own personal relationship with her own mother, and the hopes and fears of having kids of her own. All in all, she sees it as a very cyclical process. When you’re a kid, you see your parents as superheroes, capable of anything. But as you grow up, you realize that they are still growing up as well – that they are humans with their own flaws and worries.

This idea of generational knowledge is something Pink seems to be grappling with throughout the documentary, as she envisions a future where her old children are able to see her for who she really is. In the process though, she’s there to enjoy the ride, there to give Willow and Jameson the best childhood she could possibly gift them.

The Star Persona of Pink

At the same time, ‘Pink: All I Know So Far’ contrasts that introspective, motherly energy with Pink’s musical persona – the powerful, confident performer that exudes self-assuredness and bravery. We see Pink filling stadiums with her strong vocals – which are easy to forget about if you haven’t listened to her music for a while. If that applies to you, this is a reminder to get a refresher on her music, which certainly stands the test of time. She’s, simply, an extremely talented and diverse singer. With her background in gymnastics, Pink has also developed a unique stage character where she is clipped to catapults and various aerial machinery while singing. You’ll have to see it in the documentary to believe it – but there is no question that she is one of a kind.

Behind the stage, the documentary reveals that she is a leader and problem solver. With over a decade of performing under her belt, she knows exactly how to command the stage, accompanied by a tribe of trusted cast and crew (many of whom have also been with her for that decade). Undergoing a world tour comes with many working parts, and it’s intriguing to see what it takes to ensure that those nuts and bolts are working together.

But being that leader comes with its vices as well – namely, the responsibility to take care of her crew and put on a good show. In several parts of ‘Pink: All I Know So Far,’ we see her being extremely critical of herself, even when people tell her she’s doing well. It’s clear to see she has a strong dedication to her fans and supporters – and pushes herself to the limit to make sure they are getting their money’s worth. This should, of course, come to the delight of viewers and fans.

‘Pink: All I Know So Far’ does a wonderful job of melding these two personas together to create an honest image of who Pink is as a mother and performer. All in all, it portrays her as a wonderfully gracious woman who enjoys her life and doesn’t take it for granted – though she’s worked hard to get to where she is. It’s a heartening, positive look into Pink’s life through the nostalgia of being a kid and the transition into becoming a parent.

Tactfully, the documentary uses live, concert versions of her songs instead of studio-recorded versions, which gives the film a very grounded feel, as if you yourself are in the concert audience. All in all, the documentary excels as a classic music documentary – a very fun ride and a great insight into an artist we have known and loved for so long.

‘P!nk: All I Know So Far’ is now streaming on Amazon Prime.