Oscar-Nominated ‘Time’: The Documentary That Asks If Time is Really Invisible 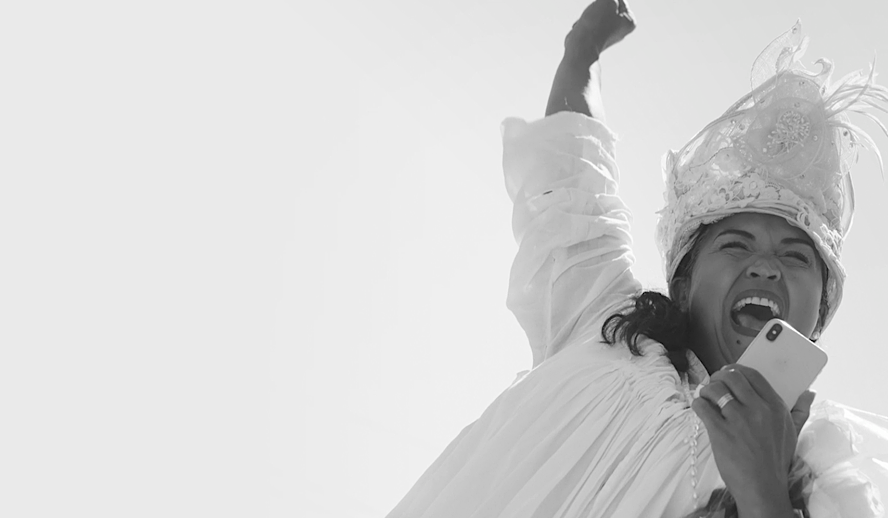 The adjective “precious” usually precedes the word “time” when expressing dissatisfaction with its disposal. This expression, the value of time, and the very human reason it is so precious give Garrett Bradley’s Oscar-nominated documentary ‘Time’ its namesake. The film tells the story of Sibil “Fox” Rich, a mother of six who together with her husband Rob, attempted armed robbery in a desperate act. Rob was sentenced to 60 years in prison while Fox got out after three and half years. The film chronicles not only the life the Richardson family lives while Rob is away, but Fox’s relentless struggle to get a rehearing.

Despite being a Black woman against an unjust system, she proves her capability very quickly but never lets you forget the longing that inspires it. Beautifully crafted by blending together home video footage with the documentary’s original footage, ‘Time’ might be a Les Misérables for a modern age, but instead of being about Jean Valjean, it is about his absence.

The choice to use home footage actually came after the film’s first incarnation, which was a short documentary about Fox. After the shooting wrapped, she provided over 100 hours of footage she had been recording for 18 years. The film opens with this footage, with Fox summarizing the entire film in the first five minutes with words that Rob told her, “No matter how grim our circumstances look right now, everything is gonna be ok.” Then we see time materialized through years of life: the boys in their Sunday best, at an amusement park, having a pool day. Soon, the much more divine reason for so many videotapes became clear in an unexpected moment. Fox is disciplining her twins on the way to school, telling them to focus and not goof off with the other boys while her camcorder rolls on the dashboard. It’s a strange moment, not one that would typically be the subject of a home movie.

Then it becomes clear that she is documenting time for her husband who is missing it, all of it, even the moments where she has to be a strict parent. After this subtle reveal, the footage gets comfortable addressing Rob directly. We see Fox, a young woman giddily recalling how she knew immediately Rob was the one and telling him how her jaw is going to hurt from smiling so much the day he returns. And as we watch the little boys get facial hair and head off to get educations, the fleeting and ever-changing nature of time is constantly present.

Fox Rich: The Orator We Never Knew We Needed

Fox makes it very clear from the first piece of original footage, that she is an excellent public speaker. She is recording a commercial for the used car lot she is a saleswoman at. Bradley uses it brilliantly to reveal that she is a mother of six and her wit and sophistication in front of the camera instantly define her as someone worth listening to. She explains that motivational speaking offered her a way to deal with grief by helping others. We watch her give many passionate speeches at several events. When she gets a crowd going to repeat “I won’t quit cause I’m too rich”, the audience knows she believes that’s true.

We trust her when she says that individuals are capable of anything if they believe in it, and are filled with hope that her story will have a happy ending. Her strength of spirit is evident also in the success of her children, one of whom graduated high school two years early, pointing out that many children of incarcerated parents don’t even finish. This spirit is a crucial component to a film about so many irretrievable moments and memories. Fox offers us something retrievable, something that can be held on to when all else is lost.

Filmmaking Choices That Forge a Feeling

The film’s craftsmanship is detailed and purely cinematic. The black and white cinematography makes it a movie, plain and simple. The scenes of affection, close-ups, Dutch angles shots all have a profound effect on telling the story of each individual. The twins have very different personalities, Remington, the oldest, is the wise soon-to-be dentist who expresses the very simple but profound truth that “Time is influenced by our emotions” as well as our actions. Bradley even gives Fox’s mother the stage, giving authenticity to her disdain for her daughter and Rob’s choices.

The black and white come especially in handy when Bradley uses the image of a dark and dismal swamp to visually express Fox’s statement that she and Rob entered a completely different world the day they decided to rob the bank. Bradley returns to it in the end to a triumphant effect. All these great visual choices are matched by the brilliant score. The always effective soundtrack varies from swelling John Barry-type strings to improvised sounding jazz that matches the New Orleans setting much like the swamp. The music is the work of an Ethiopian nun, Emahoy Tsegué-Maryam Guèbrou, taken from her 2006 collection of unaccompanied piano, Éthiopiques Vol. 21. Its unusual source speaks volumes about the filmmaker’s intention to give voices to Black women through her work.

One understandable criticism the film has received is that it leaves out too many details of the crime itself. The most important unanswered question I had was why didn’t Rob take the plea deal like Fox did? It would have also been helpful to learn about the other two children, it is focused on the eldest Remington, the twins Justus and Freedom, and Rob Jr, or a reason for their absence. Nonetheless, the film does what it sets out to lovingly and artfully: point out through the loss of one man’s time the extreme cost that countless people of color pay due to unjust incarceration in the United States.

‘Time’ is available to stream on Amazon Prime.