‘Love, Death & Robots’ Grows  Up A Little With Season 2 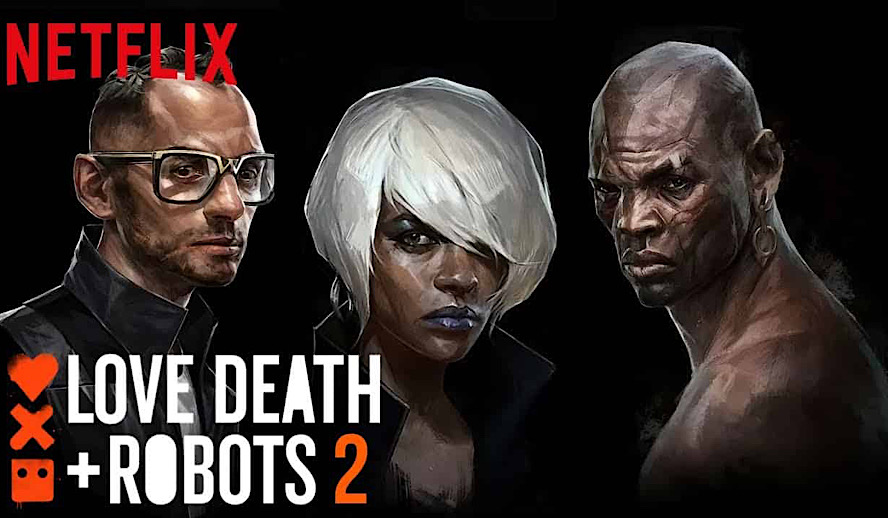 David Fincher and Tim Miller’s second attempt at ‘Love, Death & Robots’ is as visually breathtaking and emotionally resonant as his first. Although Vol. 2 premieres with less than half the episodes of Vol. 1, it packs just as much intensity, in some stories even twice as much, and continues to push the boundaries of animated storytelling past its comfort zone. Each story in this bizarre anthology is an abstract painting come to life, wild human imagination captured on footage in all of its exaggerated glory. And although the anthology gives you glimpses into strange new worlds that feel light-years away, there’s a personal touch that comes with the material that hits close to home.

Related article: Warner Bros. is embracing Artificial Intelligence: How Could this Affect our Entertainment? Would Robots Have The Instinct To Create Original Content like ‘1917’, ‘Once Upon A Time in Hollywood’ or ‘Parasite’?

The thing about each story in this anthology is, similar to its Vol. 1 predecessor, the episodes offer satisfying conclusions while feeling like prologues to much bigger stories. This isn’t an indictment against its storytelling, or the talent behind it, but rather it’s evidence of its strength, as somehow the episodes never seem incomplete or cut short despite their brevity. ‘Love, Death & Robots’ excels at world-building while giving you just enough information to make sure you don’t end up lost trying to follow their bizarre narratives.

The lack of information regarding these fantastical environments allows these worlds to be open for interpretation, so much so that at times you get the feeling that Tim Miller doesn’t want you to just be a viewer of his anthology series, but to be an active participant. He invites fans to be a part of the creative process, and encourages the contemplative viewer to include their own input and imprint on the series. Miller asks for help in building these extraordinary new worlds, hoping that after he’s done telling these stories that you mentally inherit and continue them with your own spin.

In addition to its world-building, a lot of these short films feel like subplots that have been given the spotlight, focusing on the kind of supporting characters that usually suffer the first death in a sci-fi or horror film before the credits roll. But this is also what gives the mythology its intimacy. Watching ‘Love, Death & Robots’, you get the impression that somewhere out there is a vigilante, superhero, or army that’s either going to save the world from some impending threat, or they’re eventually going to in the future.

However, in some of these episodes, Tim Miller and David Fincher aren’t concerned with characters who are destined to save humanity. Instead, they focus on the smaller characters, the characters who are affected by the world around them instead of the ones trying to change it. They focus on the small victories or defeats these characters experience, personal and quiet, which would’ve gone untold in favor of much bigger epics if it wasn’t for this anthology.

Focused More On Heart Than Carnage

Despite each anthology apparently taking place in their own, separate universes with different rules, its vast multiverse does share a strong, yet vague connective tissue that helps the stories complement each other. Like Netflix’s other anthology, ‘Black Mirror’, ‘Love, Death & Robots’ admonish viewers of the possible dangers that science presents. Whether that’s artificial intelligence or gene manipulation, Miller’s anthology shows us the potential long-term risks of our reliance on technology, and of our capacity for invention. But unlike ‘Black Mirror’, which dwells on the bleak futures our technology might cause, ‘Love, Death & Robots’ Vol. 2 adopts a more hopeful tone, even more so than Vol. 1.

Miller’s anthology celebrates the human race for its resilient spirit, compassion, and boundless optimism. Fortunately, or unfortunately depending on the kind of viewer you are, Vol. 2 isn’t as excessively violent as Vol. 1. Of course, there’s gore, but ‘Love, Death & Robots’ doesn’t crave the gore or the morbidity of its premise the way it did two years ago. This may open it to criticism for some, but it feels like a sort of growth for the series. This is the series at its most introspective. It’s a phase where it’s trying to see if it can communicate its stories without thriving on blood and carnage, which of course are still there, just toned down. It’s a welcome change of pace for the series that adds more variety to its portfolio.

The realism of the animation also has the voice actors to thank, as they help shape their animated counterparts. The facial expressions made by these characters are enhanced by the actors giving them their voice and likeness, and some episodes convey acting so immersive you can physically see the person behind the animation. These particular standout performances come in the form of Nolan North, and especially Michael B. Jordan, who gives a terrifying, claustrophobic performance.

Of course, don’t go into ‘Love, Death & Robots’ thinking you’re going to get whole episodes full of Emmy and Oscar-winning performances. Although there’s no bad talent attached to this project, some of the acting is simply serviceable. Given the nature of the series, a couple of episodes don’t require powerhouse acting, which is why when an actor commits to a role the performance can’t help but stand out.

Animation Ahead Of The Curve

‘Love, Death & Robots’ is the gold standard for animation. It feels ahead of its time, showing you what animation can turn into in a couple of years, while broadcasting its technological advances from the future. Some of the visuals are so frighteningly real that, like an android posing as a human being, the animation nearly convinces you that it was shot in live-action. But the anthology isn’t always about showing you how modern and realistic it looks. ‘Ice’ is a nice blend between traditional and modern styles of animation that stands out in its own way, choosing to show off the forgotten fluidity, grace, and artistry that 2D still has.

‘Ice’ also helps diversify the animation a bit, as the vast majority of stories in Vol. 2 are told in 3D, which makes it that much more impressive that ‘Ice’ is able to be just as visually striking as the other episodes. If nothing else, the series is a sight to behold. Sometimes it feels like the story isn’t much needed, and like taking in the grand canyon or Niagara falls, it’s enough to sit back and enjoy the beauty.

‘Love, Death & Robots’ Vol. 2 doesn’t really surpass the first season, but it matches its creativity and quality, which is a feat considering it has ten fewer episodes to do so with. It continues to innovate the genre in new and exciting ways, and it will be interesting to see what new worlds Fincher and Miller tap into going forward.