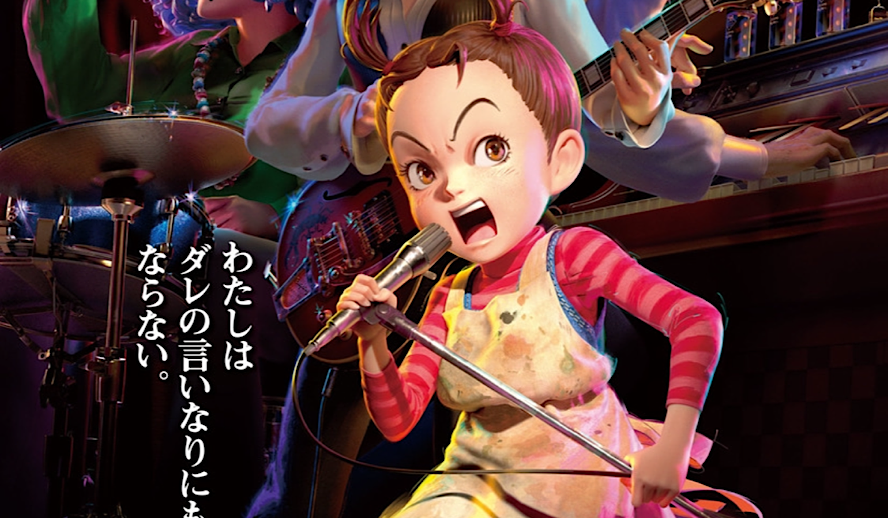 Photo: ‘Earwig and the Witch’/HBO Max

‘Earwig and the Witch’ follows a young witch named Earwig as she attempts to gain control over her new foster parents – the witch Bella Yaga and her fearsome partner, “The Mandrake.” Before being adopted by the oddball couple, Earwig had enjoyed the freedom of her orphanage, where she was a leader of the children and had everyone under her finger. In this new home, Earwig is faced with her biggest challenge yet – to win over her new parents, who she refers to more as captors. Upon being thrust into the position as Bella Yaga’s assistant, Earwig also gains a new ambition to learn more about magic.

The film is directed by Goro Miyazaki, son of the famed Hayao Miyazaki who directed films such as ‘My Neighbor Totoro’, ’Spirited Away’, and ‘Princess Mononoke.’ Goro Miyazaki has directed past Ghibli films ‘From Up on Poppy Hill’ and ‘Tales from Earthsea’.

Related article: Everything We Know About Disney’s Upcoming ‘Raya and the Last Dragon’

‘Earwig and the Witch’ – A Toss-Up for Ghibli Fanatics

The first thing you’ll notice when watching ‘Earwig and the Witch’ is that it does not look like the typical Studio Ghibli film. Departing from the studio’s iconic hand-drawn style, the film employs a new 3D animated aesthetic headed by CGI technology; in fact, the studio had to create an entirely new division to facilitate the project. This aesthetic, however, is not photorealistic like many 3D animated films today (think ‘Frozen’ or ‘Moana’), but instead, is one inspired by stop motion animation. For example, while the environments are beautifully rendered, the characters are reminiscent of claymation figures with a waxy finish.

Now, Studio Ghibli’s “house style” is typically more artistic, with hand-drawn frames, thin linework, and heritage from anime. ‘Earwig’s’ departure is a stark one, to say the least. For one, it takes a good amount of the film to simply get used to the aesthetic, which unfortunately takes away a lot of attention from the story. Then, it is simply hard to ignore the fact that this new style lacks a lot of that “Ghibli Magic” – where frames typically feel like paintings, immersing audiences in towering environments and landscapes. There are elements of the Earwig story that perhaps aid this reaction as well. For example, it’s a fairly insular story, mostly taking place in Earwig’s new home, so there isn’t much of a “world” to explore.

Die-hard Studio Ghibli fans will likely not be fans of this new style, which is understandable. However, if one tries to measure the film on its own, rather than compare it to the Ghibli greats, it’s still pretty enjoyable. Besides, any film should be evaluated on its own individual merit.

Keeping with a Ghibli hallmark, however, the film follows a young female protagonist in a coming of age story. The film is actually based on a children’s book of the same name, written by Paul Zelinsky. In the story, Earwig is a brash, headstrong trickster – akin to Pippi Longstocking. She’s probably not the greatest influence for the other orphans, urging them to feign horridness to avoid being adopted. However, her feelings of loneliness and need to escape later on in the story transform her into an endearing protagonist. We remember that her deviousness and need to be in control comes from the fact that she’s far from it – an orphan who does not where she comes from.

The film begins with Earwig’s mother – a daredevil, bohemian witch – dropping baby Earwig off at the orphanage. Throughout the film, the mother figure is someone consistently at the fringes of the story, shown in flashbacks and the musical motif of an original song Don’t Disturb Me, which she sings. We learn that Earwig’s name comes from the rock band her mother was once in – unexpectedly making music an important quality and theme of the film. Subsequently, the film employs a rock-band type score, permeated with electric guitar and drums, giving it a Western feel. Ultimately, this makes for a fun and upbeat viewing experience accommodating an equally endearing coming of age story.

Overall, the film does a great job of setting up Earwig’s wants, needs, and the obstacles at hand. It certainly sets up an interesting world and flourishes in its strong female perspectives through Earwig, her mother, and Bella Yaga. The Mandrake – the only sizable male character of the film – lurks largely in the darkness for most of the film. Ultimately, though, the conclusion of the film still falls short, ending with such abruptness that you’re left wanting more. It’s hard to say that ‘Earwig and the Witch’ lives up to fans’ expectations, but it still makes an enjoyable, family-friendly watch.

Is This the Beginning to a New Studio Ghibli?

From its conception, ‘Earwig and the Witch’ garnered much dispute for its decision to go the 3D animated route – a large departure from Studio Ghibli’s iconic, hand-drawn style. This revelation came in the midst of several disputes within the company. For one, Goro Miyazaki and his father – the revered Hayao Miyazaki – frequently seemed to be on warring opposites. This friction became apparent when Goro directed his first Ghibli film in 2006, ‘Tales from Earthsea,’ which was deeply criticized by his father. This was the beginning of a tumultuous media perception, depicting the two having a strained relationship.

In addition to this, the future of the company was at stake simply due to the passing of time. Studio Ghibli was originally founded by filmmakers Hayao Miyazaki, Isao Takahata, and Toshio Suzuki. With Takahata’s passing in 2018 and Miyazaki’s upcoming planned retirement, the original Ghibli team was ceasing to exist. Fans wondered what would become of Studio Ghibli with its beloved original creative team making way for a younger generation. Because of this, ‘Earwig and the Witch’ is regarded as much more than just a film; it symbolizes this possible transition.

In the wake of these concerns, many fans protested the film, worried that the 3D animation style would overtake the studio – much like Disney’s decision to no longer do 2D animated films. But director Goro Miyazaki persisted, confident that the new style would not take away from the Ghibli magic. In an interview with Slash Film, Miyazaki said that “in order to stay true to our style here at Studio Ghibli, that necessarily doesn’t mean that we should stick with hand-drawn animation. I really believe that challenging new things within the studio is the key to staying true to ourselves.” Miyazaki expressed that ‘Earwig’s’ style is not the template for future Ghibli films – but simply a venture into new territory. So, fans should rest assured knowing that their beloved Ghibli style will persist. If anything, even with the mixed reactions to ‘Earwig and the Witch,’ the filmmaker and team should be praised for their enthusiasm to try new things, and for attempting to elevate Studio Ghibli to new heights.

‘Earwig and the Witch,’ as well as the entire Studio Ghibli slate, can be streamed on HBO Max. It is available in Japanese with subtitles and dubbed in English.