‘Thor: Love and Thunder:’ Will Taika Waititi’s Next Project be the Best MCU Solo Film? 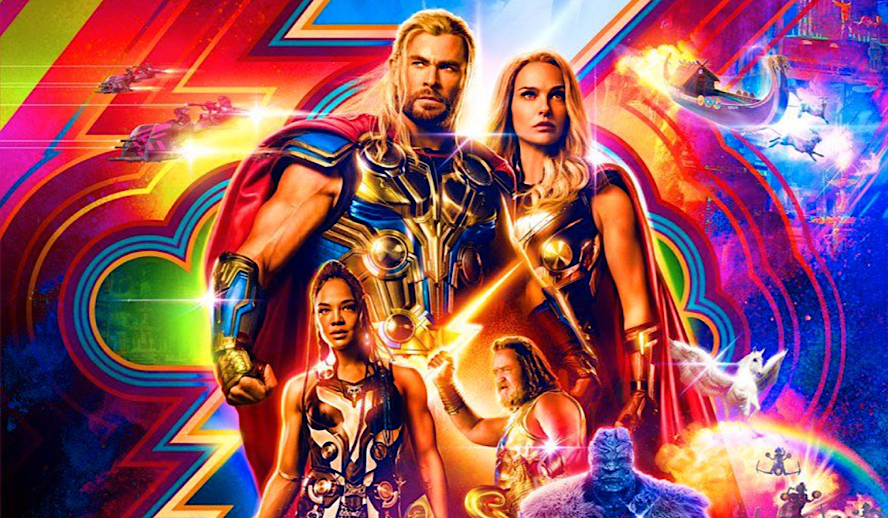 Got any summer plans yet? Thor Odinson’s fourth solo film, ‘Thor: Love and Thunder,’ is slated to hit theaters this July, and the first teaser looks masterful. Following the success of Taika Waititi’s ‘Thor: Ragnorak,’ The MCU has taken a risk by giving the character of Thor, a fourth film, despite the pattern of trilogies. Thor is an OG Avenger, being on screen since 2011, and while most of his other OGs have said “goodbye” to the superhero genre, actor Chris Hemsworth knows there are more adventures for the God of Thunder to have.

Set to ‘Guns N’ Roses’, “Sweet Child O’ Mine,” the 90-second trailer hits all of the right beats. The opening voiceover details how Thor is ready to foster peace and retire from war, yet the responsibilities of protecting the universe may thwart his newfound idealism. The visuals, with stunning cinematography, depict a wacky, fun-loving journey for Thor, including an 80s training montage and a hint of romance. Depicting gods and space will always be difficult because…it’s gods and space, but the character-driven focus works to ground the eccentricities of this world.

Taika Waititi has hit many marks, from the Oscar-winning ‘JoJo Rabbit’ to his horror-comedy ‘What We Do in the Shadows.’ This is a man who can balance human-centric, or god-centric themes with hysterical humor, all packed into a cohesive narrative. Not only is Waititi a brilliant director, but he is also a witty screenwriter and an advocate for improvisation on set. He is an actor who doesn’t mind being goofy around his castmates, yet still commands respect when he sits in the director’s chair. Having him steer the boat already makes ‘Thor: Love and Thunder’ hyped. However, Waititi does not appear to rely on his formidable reputation. He is putting tangible efforts into making this installment of Thor just as good, if not better, than the last.

He promises adventure. The creative multitude of settings and vast world-building are the perfect playgrounds for a groundbreaking quest to take place. He promises fun. There are already moments to laugh despite trailers only being collages of clips. Marvel has built their own reputation for mixing comedy and action, so Waititi lives up to the expectations. Most importantly, he promises character. The cast is stacked with lovable characters, from the return of the  Guardians of the Galaxy (with whom Thor went off at the end of ‘’Endgame’) to Valkyrie, the new King of Asgard.  Christian Bale joins the cast as the likely villain, Gorr the God Butcher (that’s a fun title). Additionally, there’s a new hand wielding Thor’s mighty hammer. Who could it be? With these character promises, the audience will be in for a crazy ride.

EVOLUTION: Every Natalie Portman Role From 1994 to 2022, All Performances Exceptionally Poignant

Not Every God Has a Plan

Perhaps the most important character promise received is the development promised for Thor. Thor has changed immensely throughout his film appearances, starting off as a stiffer character before unleashing the extent of his humor with ‘Ragnorak,’ thanks to Waititi and Hemsworth. But his arc hasn’t been complete just yet. Fans were questioning the character following his appearance in ‘Endgame,’ mainly because the epic Avengers film showed him at his lowest. When a character hits rock bottom, the audience wants nothing more than to see them climb their way out of the pit of despair. Healing arcs like that don’t happen overnight, but with the right dedication and intricacies, they can happen over the duration of a Waititi film. Even after all these years of looking at Thor (and Chris Hemsworth’s abs), he is still having to find himself. That’s comforting, isn’t it? The God of Thunder who fought Thanos and ruled over Asgard still has space for self-discovery. If anyone is ever worried about taking too long to “find themselves,” they should be reminded of Thor.

There is a microscopic level of intimacy and vulnerability to be received from Thor. No matter how tough or how strong he is, he cannot be written off as just a powerful god. He is a fully flesh-out character with whom everyone has laughed and cried with. His power stems from somewhere within him and he has worked his way up throughout the years to strengthen that power. In Thor’s previous film, his hammer was destroyed, yet he fought against evil without it, recognizing the power within. All this talk of inner strength may sound cheesy, but it resonates. If ‘Thor: Love and Thunder’ continues this path of finding worth, not from lightning, but from Thor’s complexity, it will further prove that the superhero genre is more than CGI battles. There’s nothing a film buff loves more than a solid, complex character.

The Art of a Trailer

Trailers have a bad history of giving too much away. Certain previews feel like “now, I don’t have to watch the movie. I saw everything.” This trailer causes no such feeling. The audience sees fan-favorite characters, comic-book accurate costumes, and the overall tone the film will have. However, the actual plot, the “plan” of the film, is not given away. Obviously, because of the lack of specificity, there is also room for disappointment. No fan wants to be let down, but it is important to recognize that that is still a possibility. For now, it is best to look on the bright side – this film is full of bright colors. The audience is given what’s needed to be intrigued, but the heart of the film is left to be revealed by the film itself. This is also a teaser, literally intended to “tease” the audience, meaning there’s time for more specific content and plot reveals for later trailers and posters to cover.

The teaser for ‘Thor: Love and Thunder’ poses a very direct and significant question: will this film be the best MCU solo film? The debating of fans will always be around, but Thor’s fourth film cements itself as a strong contender for the title. By giving backing to its main character, filling out the supporting cast with more fan favorites, and using an upbeat 80s tone, there is so much going for it. No judgment can be made until July 2022, but ‘Thor: Love and Thunder’ looks like it is the complete package. The teaser trailer has done its job to generate a deserved amount of hype.