‘The Hunger Games’ Prequel: ‘The Ballad of Songbirds and Snakes’ is Being Developed into a Film and Reviving a Genre 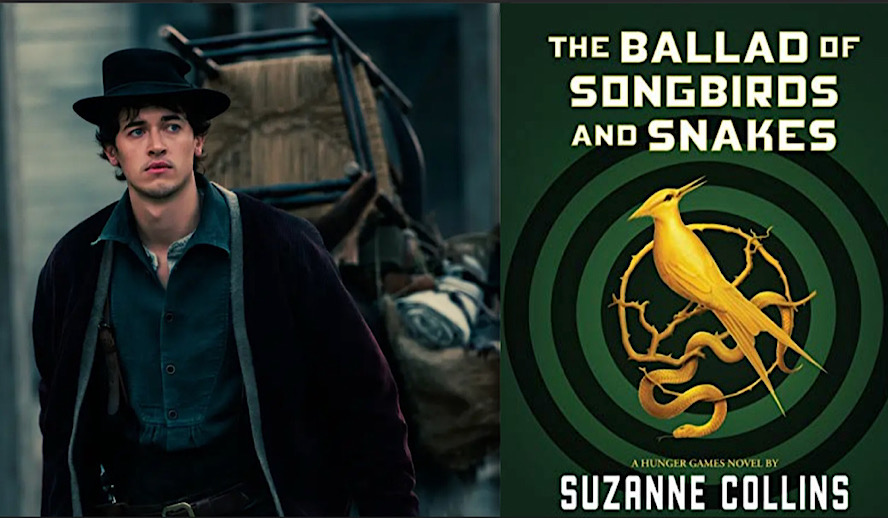 Back in 2012, the world was graced with one of the most impactful book-to-movie franchises, following ‘Harry Potter’ and ‘The Twilight Saga.’ ‘The Hunger Games’ transformed from the pages and onto the big screen. The book trilogy, written by Suzanne Collins, swept into schools, workplaces, and homes when it was released all the way back in 2008. Everyone was drawn to the terrifying dystopian take on a world where children were forced to fight to the death for entertainment. It didn’t take long for a film adaptation of the series to come to life.

These films were a massive success and starred Jennifer Lawrence in the main role of Katniss Everdeen, accompanied by the likes of Josh Hutcherson, Liam Hemsworth, Woody Harrelson, Donald Sutherland, and many more. The project catapulted a new genre of film adaptions for young adult (YA) dystopian novels to receive Cinematic treatment. Franchises such as ‘Divergent’ and ‘The Maze Runner’ were welcomed into theaters shortly after. However, the surge of these book-to-movie adaptations quickly filtered out almost as fast as they became popular. With ‘The Hunger Games’ prequel novel, ‘The Ballad of Songbirds and Snakes,’ in development to become a film, it’s possible for this genre to come back to life.

An Overview of ‘The Ballad of Songbirds and Snakes’

Released in 2020 amidst the Covid-19 pandemic, the prequel novel by Suzanne Collins covers the main antagonist of the series, Coriolanus Snow, as he mentors the District 12 tribute, Lucy Gray Baird, in the 10th annual Hunger Games, before he begins his rise to power. The book gives its audience an in-depth perspective on the struggles of the Hunger Games during its earlier years, giving backing to the world it is set in, and providing a compelling backstory for Snow. It’s a novel that directly adheres to fans of the original trilogy, taking the initial concept and expanding upon it.

It’s a popular practice to take a revered piece of fiction and flip it into the villain’s perspective. The musical ‘Wicked’ (based on a book by Gregory Maguire, and now being turned into a film series) details the events from ‘The Wizard of Oz,’ but from the perspective of Elphaba, AKA the Wicked Witch of the West. Disney’s newer take on ‘Sleeping Beauty’ focused on the fairy tale from Maleficient’s perspective in 2014’s ‘Maleficent,’ starring Angelina Jolie, and its 2019 sequel. It’s up for discussion whether this trend is productive or not for the media, but villain origin stories are all the rage in the current world. ‘The Ballad of Songbirds and Snakes’ takes this inclination and uses it to provide more lore and intrigue within the country of Panem, where the series takes place. Overall, the addition of the prequel seeks to enhance the character of Snow and demonstrate the Hunger Games from a new viewpoint. The novel was met with positive reviews, and a film adaptation was in the works just as the novel was being released.

‘The Hunger Games’ Prequel – Everything We Know About the Movie Adaptation

Movie adaptations generally hit, or they miss. It’s hard to please fans of the original written words, while still molding the story of the book into a format that is Cinema-ready. The Book vs. Movie debate is sparked with every new adaptation. ‘The Hunger Games’ movie trilogy proved itself to be a successful adaptation, even as years passed by. Director Francis Lawrence, who directed all but the first film in the franchise, is returning for ‘The Ballad of Songbirds and Snakes.’ Additionally, Suzanne Collins is on board as a producer, and it is always a good sign when the original author is included and immersed in the process of the film. The film is set to be released on November 17th, 2023.

Who is set to star? ‘The Hunger Games’ casting was pretty spot on as far as the novel is concerned, and it seems like the prequel film will follow suit. Tom Blyth has been chosen to play the young Coriolanus Snow. A graduate of The Julliard School, Blyth is a fresh face for Hollywood, recently starring in the drama film ‘Benediction,’ directed by Terence Davies, and playing the titular role in the new series ‘Billy the Kid.’ Playing opposite Blyth as Lucy Gray Baird is none other than West Side Story’s Rachel Zegler. The 21-year-old actress has had a line-up of projects following her debut as Steven Spielberg’s Maria, set to star as Snow White in Disney’s new live-action adaptation, cast in the ‘Shazam!’ sequel, and now playing Lucy Gray. Both are newer, young actors whose careers will likely be launched even further following the release of this film.

How Will the YA Genre be Revived?

YA is an expansive and popular genre for bookworms. It is also an easy target for film studios to hit because there is already a fanbase. However, booklovers and moviegoers have seen their fair share of disappointment following adaptations of popular young adult novels. From around 2012-2015 (the years during which ‘The Hunger Games’ films were being released), there was a surplus of these adaptations, but because so many fell short of their source material and were incomparable to the success of ‘The Hunger Games,’ the trend died out. In the years since, other adaptations of the genre, such as 2018’s ‘The Darkest Minds,’ haven’t been able to reach the same amount of hype. With ‘The Ballad of Songbirds and Snakes’ coming to the big screen, there is the possibility that this beloved genre will resurface.

‘The Ballad of Songbirds and Snakes’ is not alone as a YA adaptation. Netflix’s ‘Shadow and Bone’ series, based on Leigh Bardugo’s Grishaverse novels, has recently wrapped filming for its second season. Meanwhile, other popular YA series such as ‘The Selection’ and ‘Red Queen’ is also in the works, making sure this genre is not disappearing again any time soon. All that’s left to do is anticipate the release of ‘The Ballad of Songbirds and Snakes,’ and hope that the prequel lives up to the expectations set by its series.