‘The Misadventures of Hedi and Cokeman’: A Wacky, Wild Trip of a French Film The Utter Ridiculousness 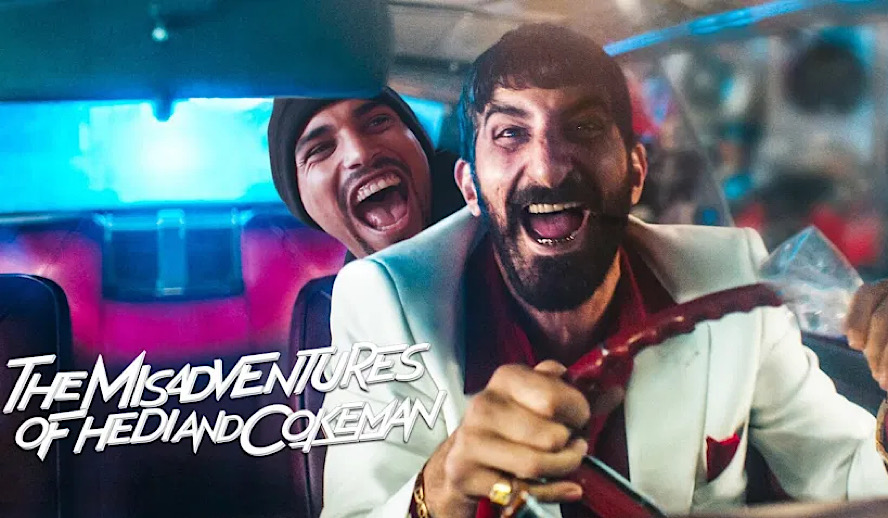 Photo: ‘The Misadventures of Hedi and Cokeman’/Netflix

‘The Misadventures of Hedi and Cokeman’ premiered on Netflix in early February 2021. The French action-comedy follows a duo of bumbling drug dealers during their many schenanegins through the streets of Paris. The film is fast-paced, over-the-top in the best kind of way, and, ultimately, an extremely entertaining watch. The humor is all spectacle, with funny one-liners and daring escapades fueling the whole film. The main characters are idiotic, yet have moments of pure glory which prove them to be redeemable, though not necessarily relatable. If you’re looking for a movie to knock your socks off with its theatricality, ridiculousness, and comedy, then ‘The Misadventures of Hedi and Cokeman’ is the film for you.

Related article:  ‘The Last Paradiso’: A Beautifully-Shot Portrait Of A Small Rural Town

I want to start by complimenting the narrative of this film. Though it’s not going to win an Academy Award any time soon, it is beyond entertaining to watch. The writers throw any sense of realism out the window, opting instead to lean into the theatricality of the characters and their subsequent shenanigans. Our introduction to Cokeman, one of the two dealers, is through the perspective of a college student just trying to score some cocaine. However, instead of giving him cocaine, Cokeman gives him crushed-up drywall, resulting in a crazy drug-trip sequence with vivid animation and twerking pigs. Clearly, this movie is all about its own ridiculousness, even going so far as to break the fourth wall to acknowledge its theatricality.

One scene, towards the end of the film, features the villain, played by Fred Testot, breaking character to question his agents on their decision to sign him up for this wild film. The dialogue here is spectacular, and the surprising self-awareness of the film catches the audience off-guard in the most hilarious way possible. As the hijinks escalate, so does the ridiculousness of the narrative and the characters, thus increasing the entertainment-value right alongside it. There’s not a single character in the film who fits a stereotypical trope, and if they do, it’s clearly done out of irony more than seriousness. Hedi, the other part of our duo of dealers, has a beautiful sister who is unabashedly a gold digger. She flits over wealthy men, and her loyalties change by the minute. However, this trope of the gold digger becomes a running joke in the grand scheme of the film, with her charms continuing to be irresistible even to men who fully understand her shallowness. There’s not a single character in this film who doesn’t deserve their own side story; they are all wonderfully weird, wacky, and so fun to watch on screen. The filmmakers’ motto when making this movie was clearly: the crazier, the better!

Another notable aspect of this movie is its creative editing style. The film itself is only ninety minutes long, but it certainly uses its screen time efficiently. The editing is extremely fast-paced, which, when coupled with the garish visual aesthetic, makes certain that there’s never anything boring happening on screen. There are numerous sequences that help to break-up the film, best described instead of explained. For example, our character introduction to Hedi features an intense flashback sequence where he sells dog poop to his customers pretending it’s dope. Obviously, this backfires when he gets caught by a group of snobbish school girls; an encounter that results in him being beaten by the group in an exaggerated, kung-fu-style sequence. This entire flashback happens over the course of one minute, proving the extreme efficiency of the editors. Throughout the film, many sequences like the one mentioned occur, which help to break-up the narrative and keep the audience entertained visually.

Visually Stimulating in All the Best Ways

The next aspect of this film that I think is very successful is the cinematography and production design, which successfully emphasize the wackiness of this colorful cast of characters. Almost all the close-ups for this film are shot with wide-angle lenses which distort the faces of the characters to unbelievable proportions. This distortion causes our characters’ faces to feel cartoonish and caricatured, adding to our overall sense of ridiculousness. The cinematography is clever and strays far away from the typical movie formula for a scene. Instead, shots are best described as trippy and unexpected. The cinematographers use a mixture of wide-angle close-ups, beautiful establishing shots, and straight-on mid-shots to characterize the aesthetics of the film. Coupled with the incredible, detailed production design, this film is nothing short of visually stimulating.

In keeping with the overall tone of the film, the production design is colorful, garish, and exaggerated in all the right ways. First off, the various locations the film is shot in have the atmosphere of a production with a large budget. The filmmakers really make the most of what they’re working with, featuring a host of creative locations for the characters to experience their raunchy hijinks. For example, a scene towards the end features Cokeman in a sex shop trying to respond to a text that he can’t read. There’s no particular reason for this scene to take place in the sex shop, but it makes sense for his character while adding a little flavor to the production. Numerous times throughout the film, scenes take place in seemingly inappropriate settings like this, which add to the offbeat, comedic tone.

As a film student who appreciates the likes of Bergman, Malick, and Hitchcock, I can honestly say that this film is nowhere near critically “good”. But, for the ninety minutes that I spent watching it, I was entertained the entire time. I genuinely enjoyed this movie with its colorful characters and wacky hijinks. It kept me on the edge of my seat while I was dying from laughter. It is a hilariously good time with some of the most creatively weird characters that I’ve ever seen. And, the self-awareness that the film has about its own ridiculousness is something that I often find lacking in American movies. It was “meta” to say the least. If you ever have ninety minutes to watch a quick foreign film on Netflix, I highly recommend ‘The Misadventures of Hedi and Cokeman’ as you’re in for a guaranteed fun time.