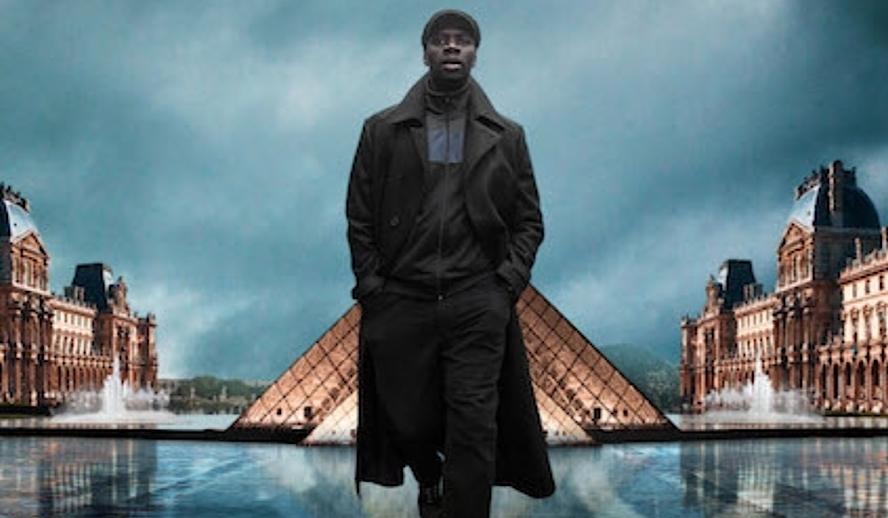 In Netflix’s new original series ‘Lupin’, Omar Sy stars as Assane Diop, a Senegalese immigrant in Paris who we first meet as a janitor in the Louvre. As he cleans the darkened museum halls, he stops to admire the Queen’s Necklace, which once belonged to Marie Antoinette, and will soon be up for auction. Looking knowingly into the camera, we can tell Assane’s got a plan.

He enlists some local loan sharks to help him steal the necklace during the auction and walk away with millions. When they scoff at how they could pull off the job, Assane explains that people underestimate him. “You saw me, but you didn’t really look,” he says. And this is the crux of ‘Lupin’: tall and muscular Assane cuts a striking figure but frequently goes unnoticed as a Black immigrant. Assane uses others’ perceptions of him to his advantage by blending into the background or by pointing out people’s racist assumptions—why shouldn’t he be a multimillionaire attending the Louvre auction?

Related article: Must-Watch: ‘I am Jonas’ is the French Romantic Drama That Forces You to Feel

But Assane isn’t just after the necklace for his next big score, and the thrilling Louvre heist in the first episode is only the beginning. Twenty-five years prior, Assane’s father Babakar (Fargass Assandé) worked as a chauffeur for the wealthy and powerful Pellegrini family, which previously owned the necklace. When the necklace disappeared, Monsieur Pellegrini (Hervé Pierre) accused Babakar of stealing it, landing him in prison and driving him to commit suicide. Convinced his father is innocent, Assane is seeking justice against those responsible for his father’s death using the skills he’s learned from the Arsène Lupin stories, one of which was given to him by his father before he died.

Who is Arsène Lupin?

Gentleman thief and master of disguise Arsène Lupin was created in 1905 by French writer Maurice Leblanc, appearing in a total of 24 books. The character has since been reincarnated in many films, TV series, and even video games. Along with another gentleman thief character created by Leblanc’s contemporary called A. J. Raffles, Lupin likely inspired such characters as The Lone Wolf and The Saint.

While Lupin himself does not appear in the TV series, the essence of the character is what drives Assane: his charm, his ruses, and his intricate plans are all inspired by Leblanc’s gentleman thief. At the end of the first episode, Assane proclaims, “Arsène Lupin isn’t just a book. He’s my heritage. My method. My path. I am Lupin.” Assane connects with his son Raoul (Etan Simon) through sharing this heritage and love of Lupin handed down to Assane by his father.

Sy’s performance as Assane is absolutely charming. He’s as suave as James Bond, as clever as Sherlock Holmes, and as crusading as Robin Hood; and best of all, he’s often light-hearted and fun. You’ll likely find yourself grinning as Assane seamlessly performs a character to avoid detection or outsmarts the police with clever planning. Whether he’s breaking into and out of prison or tricking someone into begging him to take their valuables, watching Assane con people is a pure delight. The fact that Assane takes pleasure in the game greatly adds to the entertainment.

Assane’s ex Claire (Ludivine Sagnier) and their son Raoul anchor him, and his present friendship-relationship with Claire is engaging to watch. In flashbacks, Young Assane (Mamadou Haidara) and Young Claire (Ludmilla Makowski) are equally as charismatic as their adult counterparts. Learning how their relationship began provides a paradoxically heartfelt gravitas that only doe-eyed young love can.

Assane’s friend Benjamin (Antoine Gouy), a forger who owns an antique shop, appears to be the only one he trusts with the truth about what he does; yet Benjamin is so far underdeveloped and underutilized. Hopefully, the next five episodes will explore the partners-in-crime relationship between Assane and Benjamin, or even feature Assane confiding more in his friend since he keeps so many secrets from his family. However, Assane does confide in former journalist Fabienne (Anne Benoît), with whom he teams up to take on Pellegrini. Whip-smart Fabienne and her feisty dog J’accuse are great additions to the story.

The Powerful and the Professional

Who else populates the gentleman thief’s world? Monsieur Pellegrini makes for a great antagonist as the domineering patriarch who will do whatever it takes to preserve his way of life. When the Queen’s Necklace is stolen from the auction, Pellegrini’s daughter Juliette (Clotilde Hesme), who was close with Assane when they were young, begins to suspect that her father might not be the upstanding man she thought he was.

Stories centering on master thief protagonists often struggle with how to portray the people chasing them, tending to elevate the protagonist’s genius by dumbing down the police. In the case of ‘Lupin’, the three detectives investigating the Louvre heist are generally pretty smart, making it all the more enjoyable when Assane repeatedly outwits them. While the police characters aren’t fully fleshed out, their personalities come across well and they help move the story along. However, it is rather convenient that one of the detectives (Soufiane Guerrab) just so happens to be a Maurice Leblanc fan and spots connections between Assane’s crimes and the Lupin stories. His colleagues dismiss his ideas as outlandish. If they only knew.

‘Lupin’ skillfully weaves elements of action, thriller, conspiracy, and drama together like a silver-tongued yarn. With new layers of intrigue introduced in each episode along with deeper understandings of the characters revealed in flashbacks, the show covers immense ground in only five episodes. If you might be wary of watching a foreign language show because of the subtitles, fear not; ‘Lupin’ is very watchable even for those who have trouble with subtitles, and hearing the original French adds Arsène Lupin’s trademark Gallic flair to an already suave production. ‘Lupin’ is certifiably binge-worthy and will leave you eager for the second part of the first season.

Stream the first five episodes of ‘Lupin’ on Netflix now.