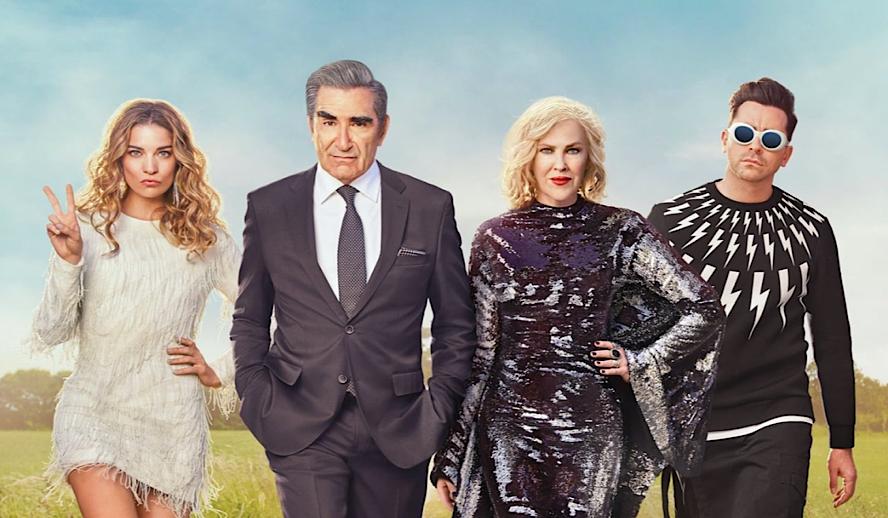 Meet the Rose family; a businessman who lost everything to tax fraud, a highly strung former soap opera star, a spoiled socialite, and a thirty-four-year old son who doesn’t understand how credit cards work. When the Roses lose everything, they are forced to relocate to a small town that Johnny Rose once bought his son a joke; a truck-stop of a town named Schitt’s Creek.

From the premise alone, the openings for comedy are endless. We are promised infinite amounts of schadenfreude, watching these formerly privileged members of the one percent struggle as they attempt to survive amongst the ranks of ‘regular people’. From Moira’s unending wig collection to Alexis’s never-ending accounts of various kidnappings, we settle in for some satisfying, if fictional, humiliation of the upper classes that hold so much sway over the real world we live in.

The ludicrous struggles of the rich are far from an original premise, with Arrested Development knocking it out of the park for three seasons. But while the selfish and incompetent Bluths began to grow tiresome as they spread into their fourth season and became utterly unwatchable in their fifth, the Roses are turned from the butt of the joke into a team we were cheering for all the way to the end of the show’s sixth and final season. This father and son run sit-com from Eugene and Dan Levy snowballed into a runaway hit with the public, the LGBTQI+ community, and the Emmys. The show was nominated for three awards in 2019 and winning a whopping five in 2020, including Outstanding Comedy Series, and taking home the prizes in all four acting categories.

The situation comedy has been around since the mid-twentieth century, with shows such as I Love Lucy and The Honeymooners hitting American television sets in the 1950s. The format was easily recognizable, even into the more recent outings that swerved away from the usual focus on the nuclear family with Seinfeld and later Friends, How I Met Your Mother, and The Big Bang Theory. However, while these shows remain classics, a rewatch feels outdated – even with The Big Bang Theory that had its finale only last year. It has become apparent that today’s audiences want something different.

Designing shows to be binge-watched on individual devices as opposed to tuning in one a week by week basis has become the norm, but this is only a small piece of the Café Tropical pie that is Schitt’s Creek’s success. Gone are the days of wacky misunderstandings and hi-jinks, studio audiences, and laugh tracks. Now, audiences are looking elsewhere for determining what makes a quality comedy. If the success of sitcoms such as Parks and Recreation, Brooklyn Nine-Nine, and The Good Place are anything to go by, that success comes from characters that grow, change and improve over time, showing the world, not as it is, but as it could be.

Not just another riches to rags story

Like a bottle of Herb Ertlinger’s Fruit Wine, Schitt’s Creek only improved as it matured. The audience and acclaim of the show only increased as each season was released, as proved by the final season sweeping up at the 2020 Emmys. Culture Reporter for the New York Times, David Itzkoff, accurately labeled the show as “A grassroots, word of mouth phenomenon,” the fanbase swelling with each new addition to the narrative. So how did this take on the ‘down on their luck rich people’ trope gain such a dedicated and widespread following?

In the Netflix documentary Schitt’s Creek: Best Wishes, Warmest regards, Dan Levy commented, “I’d seen the rich people lose their money concept played out in sitcoms, but I’d never seen it articulated through a slightly more sophisticated comedic lens.” Sure enough, the high concept set-up and familiar comedic tropes of season one were quick to fall away to a more nuanced, intelligent form of storytelling. Instead of laughing at rich people forced to live in a disgusting motel, we were treated to a heart-warming journey of not only the town improving the Roses, but the Roses giving back in kind, renovating the town they had once viewed as their exile.

The more dramatic elements of the plot were quickly discarded as well. Alexis Rose (Annie Murphy) was freed from her love triangle, with more emphasis being placed on her growing independence and transformation from a spoiled, ditzy socialite into a self-made woman. The show’s original ‘will-they-won’t-they’ narrative, instead of spawning into yet another ‘Ross and Rachel,’ was permanently ditched in season two, with the show’s runtime being given to loving, mature, and healthy relationships instead. From the beginning, Johnny and Moira are depicted as irrefutably in love, and as parents who deeply care about their children – even if they’re out of practice in showing it. This was always a family who loved each other; it just took stripping away the glitz and glam of their many distractions for them to acknowledge it.

The Roses do more than grow and mature into their best selves in Schitt’s Creek: they give back to their new community. Herein lies the true key to the sitcom’s success. We live in a society that is increasingly focussed on the individual, as shown by the flood of self-help books and biographies of the single-minded entrepreneur on the market. It’s refreshing to step into what Susannah McCullough and Debra Minoff of The Take refer to as a “utopia”, where class, income boundaries, and homophobia no longer apply. The Roses begin their arcs as punchlines and end as well-rounded, happier people. Rather than settling into the town as it is, or dismissing it entirely, they manage to find potential in what is seemingly the most hopeless of places and turn it, and themselves, into something worth more than every dollar they lost.

The show has also found a firm foothold in the LGBTQI+ community for not only including queer characters but showing them in happy relationships with storylines that focus on them as individuals with their identities extending beyond their sexual orientation. This kind of representation is growing but is still rare and something queer viewers and allies are hungry for. This was shown when over 1800 mothers of queer children from the Facebook group “Serendipity Doo-Dah for Moms” wrote a letter to Dan Levy and the Schitt’s Creek cast and crew thanking them for their queer representation on the show. “Your commitment to represent love and tolerance in your show is so important to families like ours,” the letter read. “Your willingness to explore, inform and educate about LGBTQ people and their relationships in an entertaining but respectful and positive manner sets a tone that is often missing. You have created new ways for queer viewers to seen themselves represented, and in its own way, that is just as important as the battles we are still fighting.”

Schitt’s Creek is a labor of love between a father and son, cast, and crew alike, and it shows in every frame. The show steered away from the easy comedy of poking fun of the once-rich and downtrodden and instead mined its characters for deeper, warmer, and more heartfelt comedy. Instead of showing the worst of people, it decided to show us the best, in a sitcom that will resonate with viewers for years to come. As Catherine O’Hara put it, “It’s just an example of how life can be, and you’re laughing. What better way to open someone’s heart and soul.”

All six seasons of Schitt’s Creek as well as the documentary Schitt’s Creek: Best Wishes, Warmest regards are available to view on Netflix.