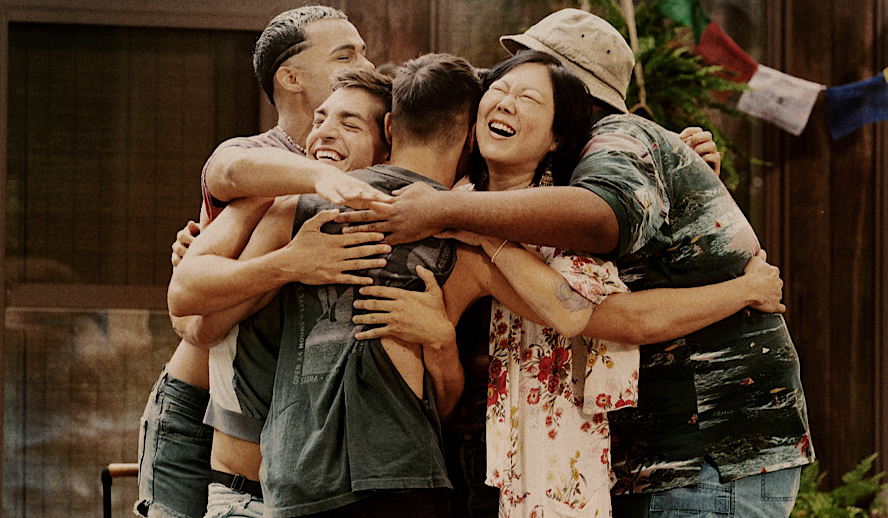 This silly and wild romantic comedy is a great start to kick off Pride month this June 2022. Filled with witty one-liners, a Charli XCX reference, and loveable characters, ‘Fire Island’ is an entertaining watch that encompasses both friendship and identity. The movie is directed by Andrew Ahn who directed films such as ‘Spa Night’ and episodes from ‘MacGyver’ and ‘Generation’. In addition to Ahn, Joel Kim Booster is an upcoming comedian who starred as the main character of the film. ‘Fire Island’ became Booster’s debut as a screenwriter. The story is absolutely unapologetic and a fun watch for the summertime.

A Celebration of Pride… and Prejudice

‘Fire Island’ opens up with a shirtless Noah (played by Joel Kim Booster) rushing to get ready as his Wendy Williams alarm continues to blast “she’s an icon, she’s a legend”. As he urges a man in his bed to leave his apartment immediately, the audience is given glimpses of novels scattered around Noah’s apartment and the camera focuses on the one and only, ‘Pride and Prejudice’. The scene cuts to Noah rushing to the dock as he spots his group of friends on a ferry as they head their way to ‘Fire Island’. The place is a beach town off the coast of New York’s Long Island which became somewhat of a safe place for the LGBTQ+ community. It is known to be a vibrant location that celebrated and welcomed everyone who was part of the community.

The film essentially follows two best friends, Noah and Howie (played by Bowen Yang). They go to the island for a week which is filled with endless parties and potential hook-ups. They are accompanied by their other three friends: Luke (played by Matt Rogers), Keegan (played by Tomás Matos), and Max (played by Torian Miller). As they head to the Pines, they discover that one of their best friends who live on the island, Erin (played by Margaret Cho), is selling the house they once considered as their second home. Due to such unforeseen plans, the gang decided to make the most out of their potential last week on the island. Throughout their time there, a single Noah decides to help Howie find a guy to hook up with.

Noah and Howie then come across a charming doctor who introduces himself as Charlie (played by James Scully) in one of the parties at Cherry Grove. Although Howie and Charlie seem to hit it off, it is Charlie’s group of friends who causes tension on ‘Fire Island’. Cooper (played by Nick Adams), a snotty family friend, and Will (played by Conrad Ricamora), Charlie’s pretentious best friend — look down on Howie and his group of outlandish friends because they are of a lower social status. As the story escalates, a strong-headed Noah butts heads with several people in Charlie’s group, most especially Will.  The movie’s timeline goes through every day of the week as each day a party commences. The eccentric group of friends creates a summer to remember as unlikely friendships are created and unexpected romances bloom throughout the course of the story.

A Realistic Take on LGBTQ+ Representation

As cliché as the story is, ‘Fire Island’ is a breath of fresh air that understands romantic comedies as a genre. Though it bases itself on Jane Austen’s notable ‘Pride and Prejudice’, its reimagining of gay romance is a joy to witness. There is the uncertainty of finding love with Howie’s character and the notions of enemies to lovers between Noah’s Elizabeth Bennet somewhat inspired character and Will who plays the Mr. Darcy in the movie. Despite it following Austen’s romance, Noah makes it clear that he disregards the heteronormative and monogamous narrative but also plays with the idea of relationships. The film and Noah’s character pull between the two which makes the story intriguing. It has all aspects that make it the perfect romance movie while also having seemingly hilarious characters that build on one another. Though the film challenges the ideas of romantic relationships, it remains grounded in the themes of having a chosen family between a group of friends who understand each other the most.

With such quirkiness and eccentricity, ‘Fire Island’ is surprisingly woke in terms of social awareness. It understands the struggle that those who are part of the community go through. The island is viewed as a safe haven but it still retains superficial, classist, and racial issues that the movie reflects upon. As Noah’s friend group is racially diverse, they are given a blind eye when going to Charlie’s party which is filled with rich White gay men who just scoff at the group. Booster’s writing recognizes the exclusion that happens within their own community which most LGBTQ+ movies oftentimes don’t bring up. It is not to be disheartening on its own part, but it is simple realism amidst this summer adventure.  That is what brought these friends together in the very beginning as they have shared experiences of racial comments and exclusion.

Is ‘Fire Island’ Worth the Watch?

There are slight technical aspects of the film that could have been more polished such as the cinematography. In terms of the writing, the answers to certain issues are left unsolved or briefly mentioned throughout the movie. Storylines such as the issues regarding Erin’s house are brought up infrequently and the only time it was recognized was towards the end. There are critiques over the movie’s ending as there were a few loose ends that were not tied together but I believe that’s what makes it a fun film. Despite certain problems, it is the characters that the movie zooms in on. Particular scenes are sometimes overly ridiculous but the unapologetic nature of the characters and the story as a whole makes it enjoyable. A film that is lighthearted but also raises important issues, ‘Fire Island’ is pure and joyous summer fun that is worth the watch. ‘Fire Island’ is available to watch on Hulu.