A Tribute to ‘Citizen Kane’: Why This Cinematic Giant Really is So Great | A Film-Lover’s Guide 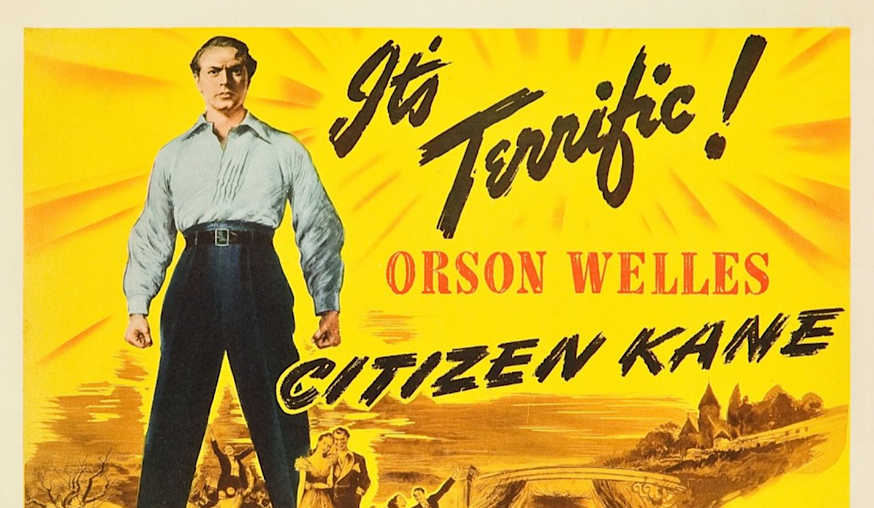 If you’ve ever been a fan of Cinema, you’ve probably heard the name ‘Citizen Kane’ somewhere before. Honestly, if you watch any TV or film in general, you’ve most likely seen or heard about this movie either in passing or as a reference somewhere in pop culture. How could you not? It’s an extremely popular film, widely considered by filmmakers and critics alike to be the greatest American film ever made. That’s pretty high praise, and its reasoning is definitely warranted. Everything about ‘Citizen Kane’ is influential, from its creation to the visual style it shows on screen.

Directed by legendary filmmaker Orson Welles, this film is the true definition of American Cinema. It follows the life of the fictional Charles Foster Kane as he ascends to the upper class and how he changes as a result of his actions. It’s a beautiful film, one that deserves to be talked about for many years to come. But, to most of the movie-going public, ‘Citizen Kane’ is just an old black-and-white film.

But it’s more than that. In fact, there’s so much worth knowing about this film, whether it’s the place it has in history or the impact it’s made on filmmaking around the world. So, don’t worry. For anyone looking for a crash course in ‘Citizen Kane’, I’ve got you covered. Here’s a quick guide of what you need to know about America’s greatest classic.

The Backstory of ‘Citizen Kane’

To understand the movie’s importance in film history, you also have to understand the story behind the film that makes it so influential. And believe me, there’s a lot that went on behind the scenes. It all started with Orson Welles’ rise into filmmaking from working in radio and theatre with the Mercury Theatre. Proving popular in radio during the late 1930s, he was offered multiple contracts to come to Hollywood, but turned them down.

It wasn’t until after his famous ‘War of the Worlds’ radio broadcast in 1938 brought him national attention, that RKO Pictures offered him a lucrative contract, one that was unlike anything before it: It allowed Welles to produce, write, direct, and perform in two pictures for the studio. More importantly, he was given the power over the final cut, meaning he had complete creative control over how the final edit of the film looked. That was unprecedented in Hollywood; A filmmaker to have that much power over a film, much less to one who hasn’t even directed a single picture before? Absolutely absurd.

Welles signed the contract and he was off to make his first film, ‘Citizen Kane’. When writing the story for this anticipated feature, he and screenwriter Herman J. Mankiewicz loosely based the character of Charles Foster Kane on many different powerful figures from the early 20th Century, the most prominent being William Randolph Hearst. Word had begun to spread that Hearst’s life was being used as the basis, and once he found out, he was furious. Without even seeing the film, he used his power in the industry to do everything possible to stop its release.

Hearst was the owner of, at the time, the country’s largest media newspaper and media company, Hearst Communications. His influence over American media and the press was enormous, and he used that influence to try and stop any excitement or hype for ‘Citizen Kane’. That includes banning any of his newspapers or press from reviewing the movie, advertising it, or even mentioning it at all.

He pressured Welles and the executives at RKO to scrap it, even offering to buy the film to stop its release. Many movie theater chains were scared of releasing it due to Hearst’s power and thus, many had limited releases, or didn’t even release it at all. Yet despite all of this, Welles and RKO never wavered and the movie was released in 1941. Although Hearst failed to destroy this beloved classic, his impact on it forever affected the way people saw the film and left a stain on Welles’ career for the rest of his life.

Even with Hearst doing his best to keep the film down, there’s more to what makes it so well-known in the film community. ‘Citizen Kane’ is as loved and as respected as it is today because it changed everything about movie-making. From the way it was shot to the way it was written, everything about the film completely reinvented the wheel in Hollywood. Its style was groundbreaking.

First off, the film’s script was different narratively than the usual Hollywood film. The unconventional narrative style focused on Kane’s death and his last word: “rosebud”. A reporter is tasked to find out what it means, so he goes to multiple people who were prominent in Kane’s life, who all paint a picture of this egotistical billionaire and his fall from grace. The script interweaves two different moments in time: one set in the present as the reporter questions Kane’s confidants and another set in the past that’s focused on the life of the powerful Kane. It’s an interesting way to weave a narrative, and the story was creative in its way of telling a story.

The use of music or a score was important for its time in how it affected the movie. When working on the score for ‘Citizen Kane’, Welles hired fellow Mercury Theatre collaborator Bernard Herrman to compose it, where he decided to try something new. Rather than score the entire film from start to finish as one long musical number, like most films at the time did, he decided to do something he later called “radio scoring”. He would create music by scene instead, and use quick musical cues to help define or emphasize the action going on in the scene. It was genius really, and it helped provide dramatic heft and emotional weight to the film when necessary.

The biggest and most important contribution for the entire film, however, was its cinematography. Welles hired Gregg Toland, a well-known cinematographer in the industry, to compose the shots for his film, a move that drastically changed his film for the better. Toland was innovative behind the camera, and his contributions cannot be downplayed. He claimed to have wanted to work with Welles due to the latter’s inexperience as a director and background in experimental theatre techniques that would give him more freedom to try out creative ways to use the camera.

Toland’s contributions often involved using long takes on the subject or a deep focus for shots. Unusual for most films, the camera often captured the ceiling during many low-angle shots (Welles and his team built ceilings for the set just for this) that make characters look powerful or intimidating from below. Messing with light and shadow constantly, the duo would create a look that was both different and innovative for its time.

So, with all of these pieces, and the extra backing of being known as the film hated by a literal billionaire, ‘Citizen Kane’ was definitely known by many at the time of its release. Although, it wasn’t considered groundbreaking until the mid-1950’s when European critics had finally been able to see it and it was also given a wider audience by airing on television. This film changed the game in so many ways. With Welles’ background in theatre and radio, he used his knowledge of both theatre and radio to aid him in crafting a film that would soon be remembered as one of America’s best. Its cinematography, music, and writing (and many, many other smaller factors as well) all paved the way for future filmmakers, and Cinema has never been the same since.

‘Citizen Kane’ is available on HBO Max and for rent on many other streaming platforms as well.