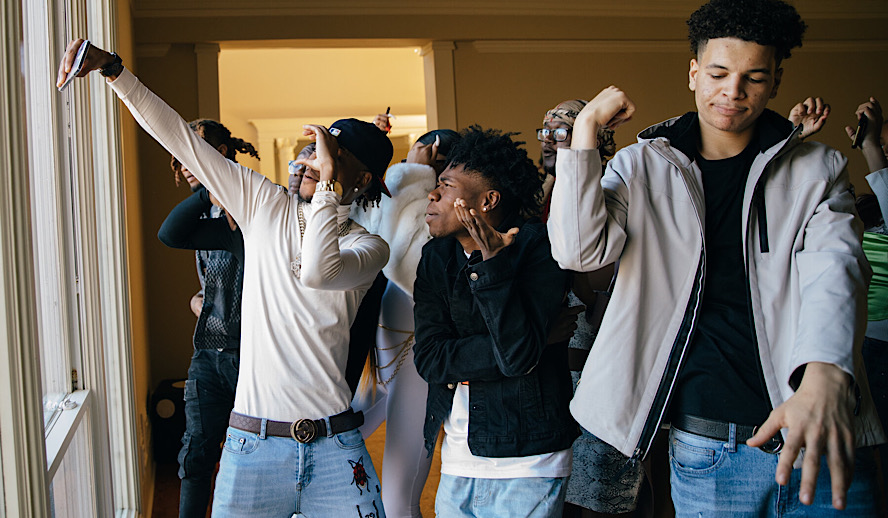 Photo: ‘Who Gets To Be An Influencer’/Hulu

“We are living in the age of social media and with that comes a new kind of celebrity. All kinds of people are trying to make it as social media influencers and stars but not many are able to break through the mold and become successful. The newest episode of ‘The New York Times Presents: Who Gets To Be An Influencer?’ examines this question while focusing on a group of people working together to achieve this goal.

What It Takes To Become An Influencer

This episode follows a group of creators known as the Collab Crib as they attempt to create a successful brand for themselves in a 90-day time span. All of these individuals have their niches, with one specializing in creating dance challenges, one making comedic videos, collabs with each other, and more. One aspect this episode shows is that creating content for social media is more than just making a video here and there to post.

These influencers have to create content schedules, track viewership statistics, subscription data, follow trends on social media, and manage their brand deals and financial gains. This goes to show that being an influencer is a legitimate living now, with one of the Collab Crib members, skit creator, and comedian Noah, pointing out that Tik Tok alone can bring an influencer $4 to $5 thousand a month.

The Algorithm’s Bias Against Creators Of Color

One of the recurring discussions during the episode is the way the social media algorithms make it more difficult for Black creators to get noticed. Kaelyn Kastle, a 24-year-old singer from Bermuda, points out early on in the episode that she has to post videos with her hair colored pink for them to gain any real traction on social media and that when she posts videos with her natural hair color she does not get the same kinds of upward statistics on her content. She said recently in an interview with ET that, “It’s hard to separate the fact that we’re Black. But, you know, Black people, we have to work a little harder for everything, so we already knew that we’re not being set to the same benchmarks and standards as most of these houses are.”

Theo Wisseh, a Tik Tok comedian, had the problem of getting shadowbanned for posting certain content when white creators posting similar videos did not face repercussions. Neil, a Tik Tok dancer, found that he was having trouble getting credit for dance challenges he created when white creators doing his dances would get thousands of more views than his original video and would not attribute credit to him for creating these routines.

Almost all the members of the Collab Crib recognized that they are having to work much harder than their white counterparts to gain recognition on social media and make money off of their work, and that leads to the greater problem of creators of color struggling to “make it in an industry that’s not made for us.” The house’s manager, Keith Dorsey, talks about how his attempts to get major brand deals for the house but got told that their house was not a match for their demographics despite those same brands going to other houses that have creators of roughly the same age and producing the same content with one difference: the creators were white.

They even highlight a few different content houses in Los Angeles whose houses are fully sponsored with the fanciest furniture, appliances, and more because companies are more willing to invest in white content creators and influencers than Black influencers even if they have great statistics.

Eventually, around the time the Collab Crib creators reached a combined subscriber count of nearly 18 million, they got featured on the Atlanta news and from there began getting more high-end brand deals and companies wanting to collaborate with members of the Collab Crib. The fact that it took them appearing on a platform such as the news for them to begin getting the recognition they deserve while white creators get the same treatment while being exclusively on social media is another demonstration of the parity problem in the influencer industry.

This has been an ongoing discussion for a while now, with the most public discourse being focused around the time when ‘The Tonight Show Starring Jimmy Fallon’ had white Tik Tok creators Charlie D’Amelio and Addison Rae demonstrate a series of Tik Tok dances on the show and not crediting the creators of those routines, the majority of which were Black creators.

While ‘The Tonight Show’ did end up doing a segment where they invited the creators of many of those challenges onto their show via Zoom to explain how they came up with their routines and perform them on the show, it took thousands of people taking their outcry to Twitter and other social media platforms before anything was done to rectify the situation (and even then, it took ‘The Tonight Show’ doing the segment twice before they even brought on any of the original creators).

‘Who Gets To Be An Influencer’ – The Takeaway

If you get anything from this episode of ‘The New York Times Presents’, it is that you should try to go beyond your “For You” page on Tik Tok, search for new names on Instagram, and in general seek out non-white content creators who may be just as good as the more mainstream influencers but do not receive as much attention because the algorithms do not favor them. If enough people go beyond what they are already presented with to find new influencers, what members of the Collab Crib call “the new American Dream” can become a reality for many because, as Kaelyn points out, “Nothing is more valuable than someone’s attention.”

‘The New York Times Presents: Who Gets To Be An Influencer?” is streaming now on Hulu.