‘The 355’: Star-Studded, Girl-Bossified, and as Derivative as They Come | With Commentary and BTS 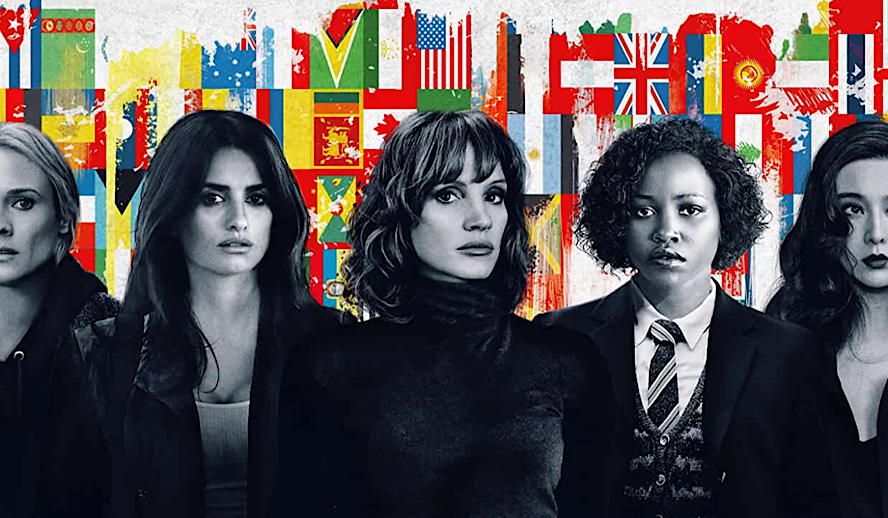 For some films, there is simultaneously so much and so little to say. ‘The 355’, directed by multiple-time action film producer, second-time film director Simon Kinberg, is a weak effort at a female-led spy thriller with a dazzling main cast and little else. With an opening weekend box office total of roughly 4.8 million, it seems that audiences are responding accordingly.

A Clichéd Union of Badass Women: “The Enemy of My Enemy is My Friend”

From the very beginning, the pacing of ‘The 355’ is confusing. The introductory scene feels drawn from a random generator of climactic sequences, and fails to capitalize on the leading interest. But, after that, we’re introduced to some of the names who are bound to draw much of this film’s domestic audience. Jessica Chastain is a beautiful but tough-as-nails secret agent partnered with Sebastian Stan in basically the only prominent male supporting role. Through heavy-handed exposition, we learn that they have a complicated friend/lover/spy partner relationship.

After a field mission to buy a hard drive that can access any system in the world (oh yeah, the bad guy steals it in the intro scene) goes haywire, Chastain has to shift her angle, and inadvertently gathers the headlining ensemble to help her retrieve the stolen drive.

Lupita Nyong’o is a genius hacker and professor, always toting a phone with strangely omniscient security camera angles and futuristic offensive capabilities. Penélope Cruz subverts her typical feisty typecast for a more neurotic therapist role who becomes entangled in their undercover mission. Diane Kruger is a stoic German spy in pursuit of similar ends on behalf of her country. Later on, Fan Bingbing comes in as a mysterious neutral.

Video: ‘The 355’ – Full Commentary and Behind the Scenes

A Result of Artistic Apathy

‘The 355’ wants to be part ‘Atomic Blonde’ and part ‘Charlie’s Angels’, but turns out overall indistinguishable through that glossy corporate sheen on the surface. The action sequences, though relatively frequent, are edited with a bland touch and preceded by uninspired ensemble spy navigation scenes. In what feels like underutilization of the format, there are few notable ‘a-ha!’ moments, of which there should be plenty when it concerns even the most mediocre thriller. ‘The 355’ lacks reverence for its characters, and as a result, they are painfully average; this is to say, the story forgoes expanding their personalities through these thrilling sequences – maybe by showcasing their skills, forcing them to make hard choices, or creating personalized obstacles – and chooses to display action scenes akin to Stock footage.

The tone, cinematography, and score are all prosaic, despite this being a harrowing international tale of death, secrets, and betrayal. Because of this, these commendable actors are left trying to somehow imbue basic tropes with the appropriate flair despite poor writing, direction, and pacing. For example, lauded Chinese actress Fan Bingbing is basically only as integrated as the film needs her to maintain the attraction of an international audience.

With a rotating door of random bald guys to keep the main characters busy before they eventually get to the ultimate Big Bad, the stakes in this film are totally warped. I dare you to recall the details of the overarching conflict of this film 24 hours after viewing: something if evil people get the drive then they can. Take over the internet? Traumatize children? The turning points of the plot lacked poignancy, so much so that the ‘twists’ and ‘turns’ of this supposed thriller melded together (dragging on the two-hour runtime) into a plot that almost made itself become more cliché as it approached the climax and finale, showcasing the lack of narrative direction beyond “badass diverse women fight stuff together”. You’ll never worry about whether the protagonists will save the world because whatever they are fighting about is uninteresting, both to the screenwriters, in turn, to the poor audience.

Narratively, there is certainly some effort to integrate the various insubstantial partners and families of the main ensemble, though it is executed through boring phone calls and facetimes, mistaking disconnected scenes of shallow domesticity for character development. This is presumably to illustrate some point about how, whilst these women are engaging in badassery, they must navigate their other priorities: love and family; instead, the film feels bloated with arbitrary characters and neglects to successfully hone in on any of these intimate relationships. What we’re left with is a project of pure Cinematic apathy, squandering impressive performers for a film that could have come from a random generator.

Missing the Point… of Making An Interesting Movie

I want to preface this by saying maybe my perspective is a little scathing, but I saw this film in an empty theater, and it was reflective of my ultimate conclusion. This film is devoid of a clear audience, or more specifically, devoid of an honored audience. Who is this for? What exactly is this film attempting to give to the audiences who pay to see it? A barely serviceable gesture in the direction of a ‘thriller’? With only a collection of acclaimed actors and over 40 million for production spending, ‘The 355’ thought that it could get away with the bare minimum, and it shows.