‘Against the Ice’: A Well-Directed, Yet Slow-Paced Historical Drama 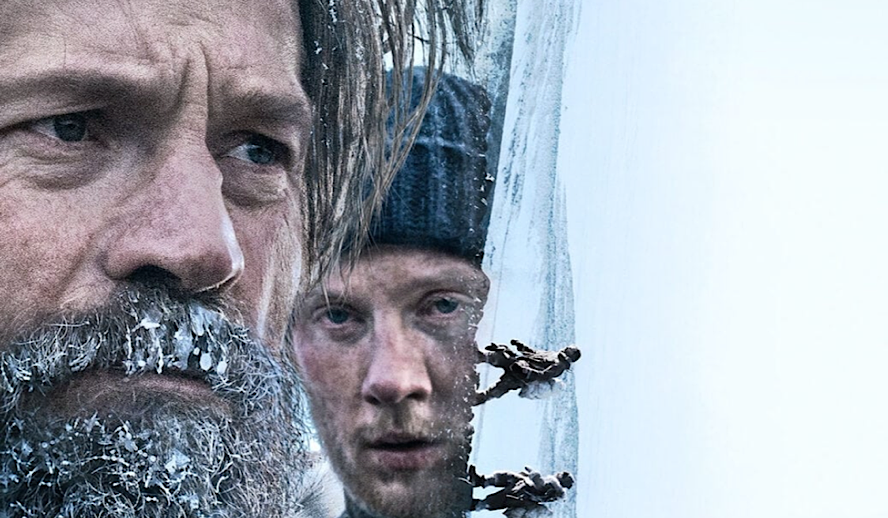 Photo: ‘Against the Ice’

In 1909, Danish explorer Ejnar Mikkelsen led an expedition into Greenland to map out its northeast coast, as well as to recover the bodies and records from the failed Denmark expedition. His engineer, Iver Iversen, joined him in finding the documents needed to prove the United States’ claim to the Northeastern region false, the two leaving the rest of the crew behind on his ship, the Alabama. When they returned, however, they found the crew had already left, leaving behind a cabin built from the trapped ship’s parts (the crew returned home on a whaling ship). Without any means of returning themselves, Ejnar and Iversen were left stranded in the region, waiting in the hopes that someone might come and rescue them.

This brings us up to the current moment, where this event has been adapted into a feature-length film called ‘Against the Ice’. Produced by the Icelandic company RvK Studios (‘Everest’, ‘The Oath’) and directed by Peter Flinth, this film follows the journey of Ejnar Mikkelsen, played by Nikolaj Coster-Waldau, and Iver Iversen, played by Joe Cole, detailing their struggle in the freezing cold environment of Greenland. Originally premiering at the Berlin International Film Festival earlier in February of this year, the film was picked up by Netflix for distribution and is now available to stream on the platform.

Going into this film, I was actually pretty excited. I love learning about historical events through based-on-true-story movies. Even if they don’t always wind up being 100% historically accurate, they can at least make me aware of what happened and paint a general idea of the event in question. In this regard, I’m glad I saw this film. Unfortunately, as a movie itself, ‘Against the Ice’ falls just short of being something actively worth recommending. The main issue I had is the pacing; the film simply feels too long for what it’s going for, with several scenes feeling more dragged out than they really needed to be. I fully understand that establishing the predicament of the two stranded men was something that was necessary to give off the sensation of isolation they were feeling, but so much time is spent where little progression in the story is made, and as a result, the film as a whole begins to feel repetitive.

As someone who loved ‘The Lighthouse’ for its level of sheer atmosphere and ability to show the mental turmoil two isolated men go through, I saw a lot of potential in this movie’s similar-but-more-grounded storyline. And while there is certainly a compelling story in here, I found the way it was told ultimately disappointing.

Despite my issues with the film, there’s still plenty to appreciate on a technical level. The acting is fairly solid all around the board, and there are no real bad performances to speak of. I don’t know a whole lot about the production of this film, so I’m not sure how the crew went about producing this movie in English, but the dialogue and the performances feel very natural. One thing I do know about the production is that the film is largely shot on location in both Iceland and Greenland, a creative decision that gives the film the kind of harsh, real feeling that a story like this deserves. When Ejnar and Iversen are making their way through the snowy mountains of Greenland, it really feels like they’re fighting against the elements. Even though I wasn’t fond of this movie’s slow pacing, there still is a strong emphasis on the hopelessness of the pair’s situation that the film pulls off quite well.

As far as cinematography goes, ‘Against the Ice’ has a lot of straightforward shots in which the camera simply focuses on whichever one of the men are speaking, but the film’s location does allow for a lot of pretty environmental shots that properly enhance the atmosphere. The Christmas dinner scene at the very beginning of the film also features warm lighting, giving it a “cozy” feel that upon rewatch almost feels like it’s building up a false sense of security; Ejnar and his men are all together and everyone’s happy for a brief moment, whereas the captain and his engineer spend the rest of the film alone. Finally, the film features quite a lot of high stakes for the two men, as the possibility of them failing their goals feels real and very possible. Knowing nothing about the event this film was based on, I had no idea where the story would go next, and I think going in blind is the best way to experience this film.

‘Against the Ice’ – Concluding Thoughts

Movies based on historical events are important, as they can introduce said events to audiences who may not have known about them otherwise, such as the case with me and this film. Sadly, poor pacing leads ‘Against the Ice’ to fall short of its potential, and while I understand that this is a personal issue that not everyone will agree with, I still think it’s worth considering if you decide to check this film out for yourself. On another note, this isn’t a film for everybody; it gets very dark and depressing at points, a couple of moments of early 20th-century medical procedures are sure to make at least someone wince, and a few other brief scenes are more than likely to upset animal lovers. All I’m saying is, don’t go in expecting something like Togo.

However, while I may not have liked this film as much as I had hoped I would, I still feel like there is something truly great within here. With the good acting and production values on display, this movie could’ve been 30 to 20 minutes shorter and better for it. I don’t think any of the movie’s emotional impact would be lost if this were the case, and with tighter pacing, the feelings of dread and isolation Ejnar and Iversen endure could be better emphasized. As it is though, there are enough good things to say about this movie that at the very least warrant giving it a chance, as the things in this movie that I appreciate are ones that others could appreciate even more so. Learning about Captain Ejnar Mikkelsen and what he set out to accomplish is enough reason for me to say that I am still glad I saw this film.

‘Against the Ice’ is now available to stream exclusively on Netflix.