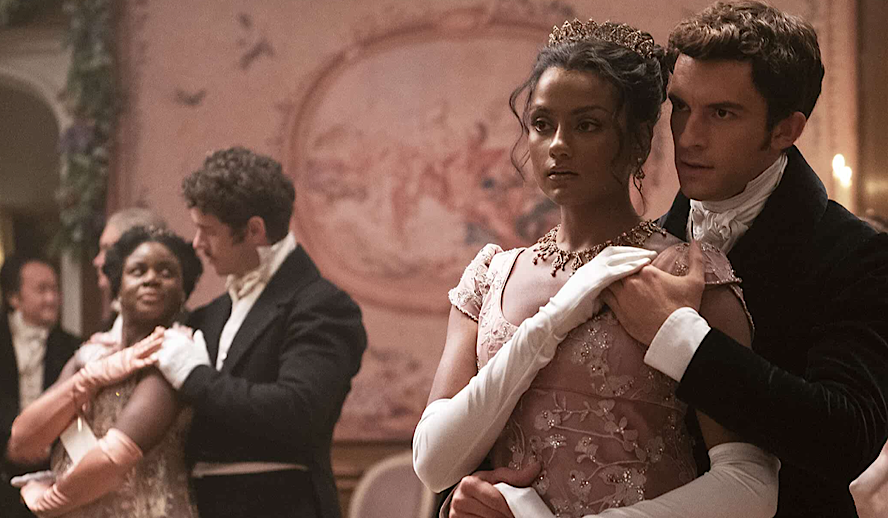 Netflix wowed and comforted pandemic-anxious viewers in 2020, with the release of the first season of their period-piece romance, ‘Bridgerton,’ which is set during the reign of Queen Charlotte of Mecklenburg-Strelitz, somewhere around 1813 & 1827, also known as Regency Period in England’s history. The show is actually based on a series of books written by author Julia Quinn. Returning for its second season, the Shonda Rhimes-produced show, with showrunner Chris Van Dusen, ‘Bridgerton’ allows viewers to seamlessly slip right back into the world of soothing narration, puffy dresses, powdered wigs, hedged gardens, and pompous British accents. The show stars Jonathan Bailey, Simone Ashley, and Nicola Coughlan, with Julia Andrews narrating.

Season two consists of eight episodes, just like the previous installment, all of which are now streaming on Netflix. This season, the show promised to focus on a love story of a different form, departing from the story between lovers, Daphne Brudgerton and Duke Simon Basset. While fans still got to see more from Daphne, though Mr. Rege-Jean Page left the show, this second installment shifted focus to the eldest Bridgerton, Anthony, as he seeks to find a suitable woman to marry. Mr. Bridgerton goes on to find the object of this desire on a horse ride during the season’s first episode, and is then introduced to the Sharma sisters, Kate and Edwina. Kate and Edwina are half-sisters, and though Kate’s motives are to aid in marrying off her younger sibling, she eventually finds herself engaged in a love entanglement of her own.

The love dynamic between Mr. Bridgerton and Lady Sharma promised to differ in style from that presented in the show’s first season. While the mysterious, biting young woman with an attitude still ends up giving the borderline-sexist, stoic male the very femme resistance that ends up charming him oh, so much is by no means new, it is a refreshing two-way street of romance for this specific show. The first episode of anything, whether a show in general or just a season, should always successfully set up the promises and teases of the things to come in episodes to follow. And this episode of ‘Bridgerton’ successfully does just that.

Throughout its runtime, as viewers are reintroduced to the many familiar faces, characters engage in pseudo-meta conversations with the other members of society, gossiping and expositing. On numerous occasions, characters literally say things like, “good luck this season, you’ll need it,” “this season, we’ll…,” and “this season is sure to…” Repeatedly, they reference “the season,” which in narrative terms refers to the period of spring and summer when, historically, wealthy British citizens would go to London and engage in social events in attempts to find suitable wives and/or husbands for their family members. Utilizing this historical tradition, term, and practice, ‘Bridgerton’ is able to explicitly pitch, promise, and propose all of the goods viewers are in store for at the head of this season – specifically, its heavy shift in focus to Jonathan Bailey’s Anthony Bridgerton and his horse-mounted quest for love.

“Regency,” as mentioned before, is the period of time during which the events of ‘Bridgerton’ take place. Historically, Regency ran from 1811-1820, paralleling the timeline of the ‘Bridgerton’ novels, whose events unfold around 1813 & 1827. This era refers to the time when the prince regent, George, son of King George III, ruled over the kingdom when his father was deemed “too unwell to rule.” The era officially ended in 1820, with the death of King George III, thus confirming George IV as the ruler. This timeframe in European and British history is quite an interesting one, ripe for on-screen representation.

One episode in this season of ‘Bridgerton,’ actually deals with some drugs and substance abuse. While this is not something commonly seen in period-pieces such as this, during the time of the Regency in Britain, drugs simply were not a highly regulated thing yet, and therefore most were not technically illegal. And so, drugs much like the ones a certain Benedict ingests in season 2 of ‘Bridgerton’ were a common pastime of members of the upper class. Specifically, opium was a drug of choice among social elites, especially during the 1800s. In ‘Bridgerton,’ Queen Charlotte is even seen with a nasty habit of snorting the ol’ snuff, a form of tobacco.

For Viewers of Downton Abbey

‘Bridgerton’ has obviously been meant to serve as Netflix’s answer to ‘Downton Abbey,’ the obscenely popular British drama that has sprawled over six seasons and spawned two films (the next of which comes out later in 2022). And, viewers of that content will be able to satisfy their thirst for those flirty Brits with Netflix’s program, but ‘Bridgerton’ has been known for offering a more contemporary take on the genre. Creator, Chris Van Dusen, has been vocal about the show’s intention and desire for representation, and its willingness to tackle inclusivity, in a genre that can otherwise feel – and has been – very…shall we say..pasty. Also, as mentioned earlier, the show never veers away from topics and models of modern society, such as its depiction of substance use and abuse, something largely present in today’s world.

And ‘Bridgerton’ has also been noted as being one of the steamier British romance dramas, with sex, bare ass, and even prostitution all making their way on-screen, going well beyond where most period pieces of the same nature stop at the mere implication, with some music, two people kissing, and a door closing. Netflix’s ‘Bridgerton’ therefore has the opportunity to attract a broader, more diverse audience, whose interests may lie outside of the conventional realm of the drama – while also upholding its core tenets, thus satisfying its intended audience of anglophiles.

And for those same fans, stay tuned, and keep your eyes on Netflix. With the early success and buzz of the long-awaited show’s return, talks of a third installment are already being had, with actress Simone Ashley potentially already gifting audiences with a slight tease in a recent interview about the premiere, which was on March 25th, 2022.