Netflix’s ‘The Two Popes’: A Buddy Comedy With More Than A Sprinkle of Blessings Which Led To Oscar Nominations for Anthony Hopkins and Jonathan Pryce 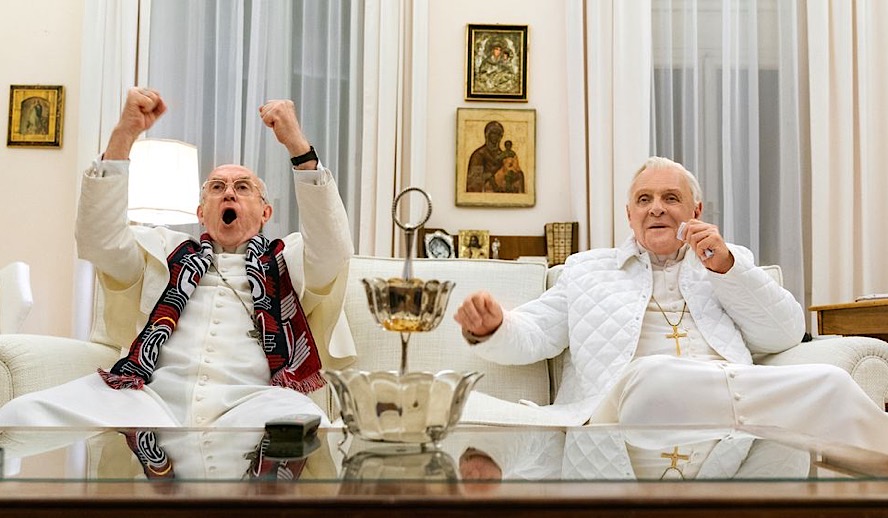 Two Popes was shaping up to be one of Netflix’s strongest Oscar contenders, with legendary talent such as Anthony Hopkins and Jonathan Pryce, and such a relevant story of power that would surely catch voters’ eyes.  However, by the time of release, surprisingly everyone forgot this film existed, as Netflix aggressively pushed Marriage Story and The Irishman instead.  It is quite a shame that this became almost a hidden gem, rather than a celebrated or talked about piece of art, as it is certainly on the same caliber as their other releases.

Simple and Slow: Hollywood doesn’t Make Films like this Anymore

Two Popes, written by Anthony McCarten and directed by Fernando Meirelles, is thought-provoking and intimate film that quite often does not get made anymore.  The story is focused around the historic event of Pope Benedict’s sudden resignation in 2014 and passing of power to Cardinal Bergoglio.  In the current era where action and fast-paced drama seems to dominate, it is refreshing to see a film like this, where the audience is just left alone with these two men and we watch them grow closer and connect.  There are no fancy shots or sequences throughout the film, and I am actually grateful. Mostly, this story is told through vibrant wide and tracking shots as the two colleagues walk through the luxurious halls of the Vatican or the lush green summer home of the Pope.  The cinematography is clean and simple, natural lighting appears to be used throughout. This provides a sense of realism and intimacy as we sit in these rooms with the characters.

​Jonathan Pryce and Anthony Hopkins make for a delightful duo

It is difficult to carry the weight of an entire film with just two characters, but these actors pulled it off marvelously.  That is not just due to their very charming performances, but how nuanced McCarten wrote these people and their relationship as well.  Jonathan Pryce is a stand-out performer as the warm and kind Cardinal Bergoglio. This is by no means a serious film throughout. There are many breaks in between the tension for heart-warming and funny scenes.  Those scenes we owe to Pryce and his charming and charismatic nature. Time after time, he takes the initiative in forging a friendship with Benedict trying to dance with him or making witty jokes. However, he is not just witty and charming throughout. Bergolio loves and is dedicated to God, so much so that he feels as if he is not good enough to serve him at times.  This brings about a range of emotions from Bergoglio; anger, regret, but also passion. Pryce brings layers to the Cardinal by showing the fallibility of his character. As righteous and lively as he may seem, he too, has doubts, regrets, and sins. On the other hand, Pope Benedict (Hopkins) is like a hard shell that he is trying to crack, as he shrugs off Bergoglio. Hopkins is stoic and strict throughout the film, trying not to reveal the pressure and stress he is succumbing to.  With the press and the world taking a magnifying glass to Benedict, criticizing his every move, he must save face and internalize his turmoil. Unfortunately, being on the world stage, he did not have the luxury of being so open. Hopkins portrayed him wonderfully, as well. Not only is he the spitting image of the Pope, but he displayed the conflict that this character faced emotionally, spiritually, and physically. Despite the fact that Pope Benedict, on the surface, seems like a very sure and stern man, Hopkins brings vulnerability, doubt, and uncertainty to his character.  Undoubtedly, I appreciate the character development that we experience throughout. We are charmed and fascinated by small moments, such as Bergolio singing ABBA or the fact that Pope Benedict loves an Austrian TV show about about a crime-solving dog.

In a Time of Instability, Two Popes Provides a Light and Meaningful Message

This story is especially important or relevant to tell today, in a time of political and social divide.  Two Popes is not just the retelling of a major historical event, it is showing us the importance of reaching across barriers and attempting to understand others despite our differences.  However, these men work past that for the not just the betterment of the Church, but for their own sake. They both realize that political beliefs aside, they are very similar people.  Though this film is a work of fiction, this is a feel-good tale about two men from opposing sides who sat down and worked out their differences. The message that is trying to be conveyed is: no matter what you believe, a compromise can be achieved.  Which, in these times, feels more like a wonderful fantasy than a promise. Nonetheless, it is pertinent that we remind people of our similarities and the importance of reaching out to our fellow neighbor.