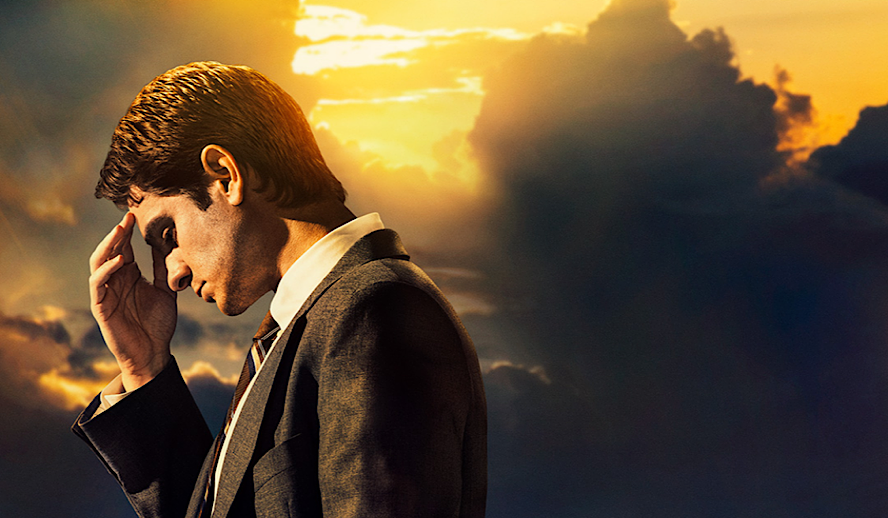 Photo: ‘Under the Banner of Heaven’

Andrew Garfield is a detective whose faith is shaken when investigating the murder of Mormon mother and baby that seems to involve The Church of Jesus Christ of Latter-day Saints (LDS Church) in the new FX series ‘Under the Banner of Heaven’. The new true-crime drama series is based on the nonfiction book of the same name by Jon Krakauer and it was adapted by screenwriter Dustin Lance Black and directed by David Mackenzie. The cast includes Andrew Garfield as Detective Jeb Pyre, Sam Worthington as Ron Lafferty, Daisy Edgar-Jones as Brenda Lafferty, Denise Gough as Dianna Lafferty, Wyatt Russel as Dan Lafferty, Billy Howle as Allen Lafferty, Chloe Pirrie as Matilda Lafferty, Seth Numrich as Robin Lafferty, Adelaide Clemens as Rebecca Pyre, Rory Culkin as Samuel Lafferty, Sandra Seacat as Josie Pyre, and Gil Birmingham as Bill Taba.

When God Was Love

Religion is something that most people have been involved with since they were born, some people revolve their lives around religion while others don’t because they’re simply not as involved in the church. With there being a variety of religions, there are a variety of different ways to worship but there comes a time when some people might question their religion because it doesn’t seem right or they have religious trauma from the church. ‘Under the Banner of Heaven’ premiered two episodes that already bring you into the world of religion and how people use it to justify their actions. Before watching these episodes if you have no clue what the LDS Church is, I say to do a little research because the show jumps right into scriptural texts of the Book of Mormon.

The first episode is titled “When God Was Love” and it introduces us to Garfield’s character Detective Jeb Pyre, it shows that he’s a family man who’s raising his family on Mormon values. As the episode goes on, he is called into work and has to go to a gruesome crime scene that leaves him emotionally distraught. It’s clear that the police force hasn’t dealt with homicide before because they can’t bring themselves to go back into the house. The episode then takes a turn because as Pyre and Taba are interviewing the victim’s husband, Allen Lafferty he begs them to find the rest of the family because he believes that someone is hunting them. During the episode, you can see how the LDS Church is conflicting with the case because as soon as Allen speaks badly about the church, Pyre believes that he is turning his back on his heavenly father.

One thing I really like about this show so far is that they’re showing the victim, Brenda Lafferty, life in flashbacks because it makes you more curious about the Lafferty family and they’re not as perfect as they portray to the community. You can tell that the whole family is under strict pressure because the Lafferty family is highly respected and treated like royalty in the LDS community. The family is shown to operate in a hierarchical system and they must follow all the rules so they won’t disappoint their dad, Ammon Lafferty, however, you can see it’s taking an emotional toll on the family. This episode is the start of challenging Pyre’s views on the LDS church because Allen is asking him questions that are making him doubt the Mormon religion like the way people use the scripture to excuse their actions. This makes the case more conflicting because of the way Allen uses the scripture to explain his actions and it’s showing Pyre that people can interpret the scripture in any way to his dismay.

I know for some people religion can be a touchy subject due to their experiences in the past and some even try to escape it with the risk of losing contact with family and friends but they do it to live a happier life. That’s the case for Allen and his wife, he just wanted to protect his family because he knew Brenda didn’t follow the traditional rules of the church and felt like she was in danger because of it. You can see this in the first episode because Brenda is not the traditional Mormon girl because she isn’t obedient to the rules and Allen, and you can see this more in the second episode titled “Rightful Place”. Brenda stands up for herself and others, she isn’t submissive to men in any way and you can see this worries Allen as time goes on because she doesn’t fit in with the traditional rules.

‘Under the Banner of Heaven’

One thing that can be challenging or even anxiety-inducing is when in a new relationship you have to sort of impress your partner’s family to be welcomed with open arms because if your partner’s family doesn’t like you, it leads to more drama and trouble for the relationship. This can be more difficult if your partner’s family is religious and you’re not because then the family believes that you don’t practice the values and it can ruin the family tradition. In this episode, we learn that Brenda’s dad doesn’t like Allen’s family because they’re not progressive when it comes to gender roles. You can see that Brenda was raised to be independent and outspoken and the Lafferty men don’t like this because she is supposed to follow the man of the house.

I think the show is doing an amazing job with Brenda’s character because you want her to succeed and challenge the norm but it’s unfortunate because you already know her fate. Therefore, that makes you want to learn more about the Lafferty family and especially the brothers because you don’t know their true motives. I really like how the show keeps you on your toes because the Lafferty family is using scripture and the stories from the Book of Mormon to fight for what they believe is right. They must do whatever their heavenly father says in order to get into heaven and it’s scary because what are the lengths they’ll go to protect their religion and family.

The second episode ends on a cliffhanger and it makes me more excited to see what’s going to happen in the next episode because the story is progressing quickly and we’ll get more information about the Lafferty family. I think all the actors are doing a phenomenal job so far and I can’t wait to see their performances in the upcoming episodes. I believe the premiere of ‘Under the Banner of Heaven’ was a success because it gets you so invested in the story within the two episodes. I can’t predict how this limited series will end but if you enjoy true-crime drama series this show will be perfect for you, it’s available on Hulu with new episodes available every Thursday.