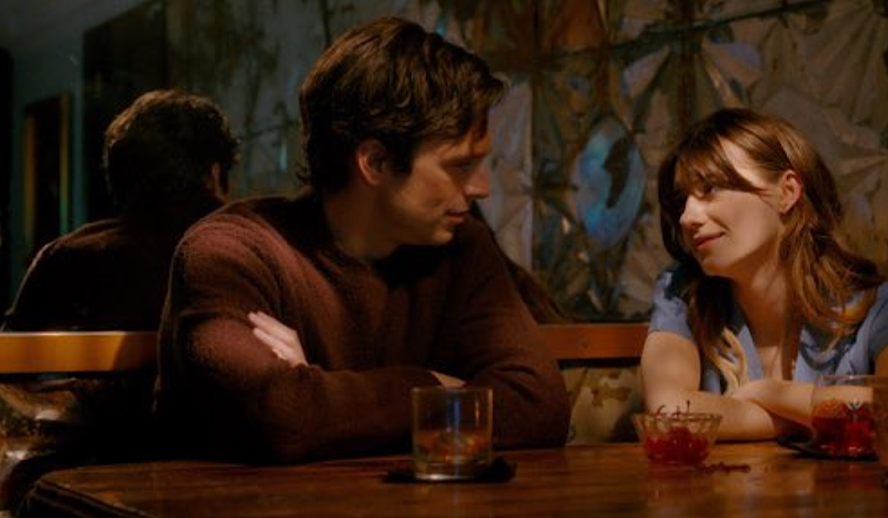 This week, new to Hulu, an exciting yet desperately unsettling thriller  – ‘Fresh’. Starring Daisy Edgar-Jones as Noa and Sebastian Stan as Steve, this film follows a woman’s horror story of a love life. A Searchlight Pictures production, directed by Mimi Cave, written by Lauryn Kahn, and shot by Pawel Pogorzelski  (responsible for the cinematography of ‘Midsommar’ and ‘Hereditary’ ) – this film will leave you truly impressed.

Dive into the story of Noa – a young woman who absolutely hates dating. After going out with less than unfortunate matches from a dating app, she is ready to give up on finding someone. Stating that she in fact thinks that anyone who believes in true love is “stupid”. That is, until she meets a stranger at a grocery store. Seeing as she has been drastically let down by the world of online dating, she decides to give him her number.

After going out on a date with Steve from the grocery store, Noa is thoroughly invested. He makes her laugh, dances with her, and doesn’t judge her for her past or things she cannot control, unlike the guys she’s used to. In this day and age, that’s a rarity! Sebastian Stan’s charming performance grooms the viewer, as well as our main character into believing that there is something truly special about Steve.

Sure, Noa’s friend Mollie (portrayed by Jojo T. Gibbs) warns her that it’s a bad idea to fall for a guy that doesn’t have social media and says some rather strange things, however this opportunity to experience authentic romance envelops Noa with curiosity that leads her to accept Steve’s invitation to go out of town for the weekend. To her unfortunate surprise, Steve has some morbid tastes. She will learn how to fight the most gruesome of circumstances in some unusual ways, doing whatever it takes to survive.

Featuring bright cinematography and detail-oriented shots, ‘Fresh’ builds up suspense by providing the viewer with glimpses of what you’re in for before you even know it. There are many things that this film can be proud of, and the amount of foreshadowing is definitely one of them. Trying to piece together the plot as the movie progresses is an entertaining game for the viewer. See if you can piece together what will happen next by hooking onto the little details that the film throws out!

An emphasis is placed on shots of food and teeth, which is similar to the cinematography of the TV adaptation of ‘The Silence of the Lambs’ – ‘Hannibal’. This is another method of subliminal foreshadowing that the film masterfully utilizes in order to bring the viewer awareness of the events that are about to unfold. From leafy greens being misted in the grocery store, to a human leg being torn apart for scraps, food as a symbol of care is a large theme in ‘Fresh’.

At times, the camera angle changes to provide different points of view. From the lens taking Noa’s place on the couch across from Steve, to assuming the role of Noa’s own eyes, the attention to perspective is impressive.

The director of cinematography, Pawel Pogorzelski, also does an incredible job of utilizing color in order to convey certain themes of warmth and coldness. He does this by directly emphasizing the colors red, orange, and yellow, as well as throwing in various shades of blue and green to add a stark contrast. The color white is used to add a bright accent to the recurring themes of warmth and chill.

Similar to the visual cues that the viewer receives, Edgar-Jones and Stan give polar opposite emotional energies in their performances. This allows the viewer to keep the character’s motivations very clear. Daisy Edgar-Jones comes in with a warm, and at times even fiery performance. While Sebastian Stan remains cold and strangely collected. The contrast of these displays of emotion, or lack thereof, allows the emotional atmosphere to remain balanced yet thrilling.

Rather than your standard Hollywood slasher, ‘Fresh’ takes after ‘Hannibal’ in the way it utilizes sophisticated gore to convey a sense of remarkable dread. Death and horror is made almost sterile through the way it is portrayed in ‘Fresh’. With neatly sealed bags of human meat piling up on polished countertops, it is almost difficult to remember that you are indeed watching scenes from a human slaughterhouse.

Eloquently prepared and beautifully presented, the viewer almost forgets that it is human meat being served at the dinner table. That sort of approach to gore is highly uncommon in Hollywood. It adds a peculiar sense of curiosity to what is happening on the screen, in addition to making this a deeply psychological experience.

Give Me a Smile

Written by Lauryn Kahn, who is primarily known for films such as ‘Step Brothers’ and ‘The Other Guys’, ‘Fresh’ finds ways to be incredibly hilarious in the most unexpected of ways. Who would think that you could laugh at a scene of human flesh being devoured at a candlelight dinner? Sebastian Stan’s performance is remarkably unsettling in the ways in which he is able to humor the most inappropriate of situations.

Of course, many of us love a classic Hollywood murder film or TV show. Rightfully so, the horror of the big screen takes us away from the horror of real life. And these days that can’t be taken for granted. However, ‘Fresh’ instead reminds us of the very real danger that love and desperation may pose. Through Sebastian Stan’s chilling performance that never quite stands still, we as the audience learn to question who we trust. Though thanks to Daisy Edgar-Jones’ performance, we also feel empowered to take action against the wrongdoings of the world.

Truly, this film will leave you surprised and thrilled. With rapid motion, bright colors, and upbeat music there are plenty of cinematic qualities to hold onto. Similar to popular shows such as ‘Hannibal’, yet unique in its own way. ‘Fresh’ is a new kind of thriller. Combining elements of psychological horror, sophisticated gore, comedy, and even romance. There is nothing that this film doesn’t do.

If you’re looking to laugh at the absurdity of the vile things in this world, give ‘Fresh’ a watch!