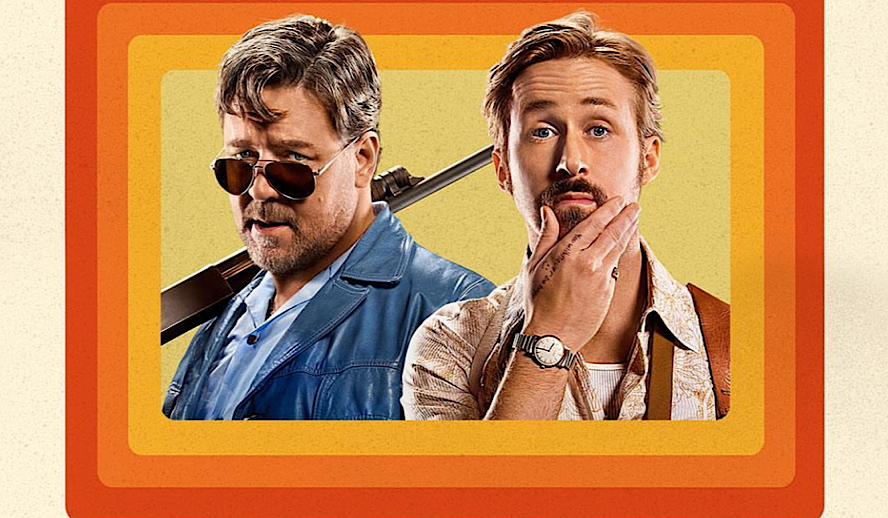 The first time I saw Shane Black’s ‘The Nice Guys’, I had rented it from my local library a few months after it had been released on home media just because I had seen reviews online that wrote about the film positively. I sat, smiling ear to ear for the entire runtime, and was shocked that I hadn’t heard more about it. When I looked into how the film did at the box office, it started to add up as to why I hadn’t heard much about it. This funny, clever, engaging, incredible movie did not get the love it deserved at the box office and I am here to tell you all the reasons to check this one out.

Set in smoggy 1977 Los Angeles, Private Eye Jackson Healy, and P.I. Holland March, portrayed magnificently by Russell Crowe and Ryan Gosling respectively, try to track down a girl named Amelia who may be connected to the recent death of a porn star. Writer-director Shane Black’s notches his third theatrically released film in this fun, R-rated, mystery movie that’s filled with laughs, intrigue, social commentary, and most of all heart.  The film excels on all levels; from the writing, direction, performances, and funky score you are instantly wrapped into the mystery of tracking down Amelia. After viewing the film, I came away feeling like it was a movie I had seen before, but in the best way possible. ‘The Nice Guys’ feels like a film that is known as one of those “classic buddy cop” movies from the 70s that my Dad would have shown me when I was younger.

Other than not being set during the Christmas Season, ‘The Nice Guys’ feels very Shane Black. This is a film that was clearly written by the mind that penned ‘Kiss Kiss Bang Bang’. Yet, it still feels like a breath of fresh air in the modern cinematic landscape which is a testament to how fun and entertaining it is. The script’s witty banter between its two leads keeps you laughing out loud consistently and I found myself on the edge of my seat excited to hear what hilarity would come next. The script understands its characters, walking the line of ridiculous fun without ever crossing into too over the top. Both of our leads are treated as more than just characters, they are treated as people and have much more to do in the script than just solve a mystery.

The film subtly has a bit of a social commentary on pollution as well as the pornography industry. I can’t get into it without giving away too much but I was surprised at how intelligent the movie was. It hides behind its comedic beats and mystery-centric plot but in all actuality, this movie does have something to say if you are paying attention.

The film doesn’t pull any punches when it comes to its R rating. The action is violent and the language is profane in the most wonderful way. Never in the film did it feel like profanity for the sake of profanity or violence for the sake of violence, but I would recommend understanding what you’re getting into ahead of time. Might be best to leave the kids at home for this.

The film is fully committed to its bleak 1970s aesthetic and that makes it incredible. The film opens with the old red and black Warner Brothers logo and a cinematic pan across a graffitied Hollywood Sign as neon title cards pop up and funky sax play in the background. The film shows the City of Angels in a less than endearing light, delving into the crime and pollution that plagued the city which plays into the overall aesthetic of the film. The camera work is slick and creative. There is a scene where Philippe Rousselot, the cinematographer of the film, decided to break the ever-strict 180-degree rule in a shot-reverse-shot conversation between Crowe and Gosling. In the hands of another cinematographer, this may have been disorienting, but Rousselot handles the camera work so masterfully that it is seamless.

A score can make or break a movie. Luckily, ‘The Nice Guys’ has one of the best scores of the decade. Its groovy theme that plays over the opening title card is still stuck in my head and perfectly encapsulates the film’s tone. The composing duo of David Buckley and John Ottman really knocked it out of the park. The music choices beyond the original score also hit home. The soundtrack choices are perfect. I recommend going in blind as to what songs will pop up throughout its runtime.

The real strength of the film comes in the performances of Crowe and Gosling — their chemistry is out of control. The two have a dynamic that is my favorite I’ve seen in a buddy cop movie in a long time. Crowe is so subdued and so subtle in this film, taking on the role of the straight man. Paired with Gosling’s fast-talking, swindler of a Private Investigator the two will have you consistently belly laughing. Both of the characters are not just limited to joke-telling. In the opening narration of the film, you understand exactly who these two men are and why they are struggling with a lack of fulfillment in their lives. The two play off each other and the script perfectly, feeling refreshingly real.

Gosling’s daughter Holly, played by the very talented Angourie Rice, is an invaluable piece to this story. She is the heart of the film, a light amongst killers, crooks, and thieves. Rice is a star in the making, pairing perfect comedic timing with deeply emotional moments. I haven’t enjoyed a young actress’s performance this much since Elle Fanning’s engaging performance in J.J. Abrams’ ‘Super 8’. The minor characters, while not given as much to do, shine in their given roles. Keith David and Beau Knapp play a pair of hired guns who are on the trail of our leads and the pair of them steal every scene they appear in. Matt Bomer’s character, a hitman also on the hunt for Amelia, is also a show stopper. While Bomer doesn’t appear much in the film, I ate up every second we were given and I was left wanting more from the 1970s equivalent of Keanu Reeves‘ boogeyman, John Wick.

My Case To You

In a world where constantly we hear complaints of sequel, prequel, spin-off overload, ‘The Nice Guys’ shines as an incredibly original and entertaining film that no one saw. Too often do we see original films underperform and never be given their shot, even when critically acclaimed. While Black has expressed interests in prospects of continuing the story in some way in the future, ‘The Nice Guys’ has a tough road ahead in terms of potential sequels due to his box office performance, but it shouldn’t. I share some culpability in the film’s underperformance as well, I didn’t make my way out to theaters when it was released. If you’re also someone who missed out, I urge you to give ‘The Nice Guys’ a look. Just like me, I guarantee you won’t regret it.

Where To Watch ‘The Nice Guys’

‘The Nice Guys’ is currently streaming on Hulu and is available for purchase or rental on Amazon Prime Video, Google Play, Vudu, YouTube Movies, and wherever else digital films are sold.

You can see Russell Crowe later this year in ‘The Georgetown Project’, starring opposite Sam Worthington. Ryan Gosling’s next project, ‘The Gray Man’ directed by Joe and Anthony Russo, is still in pre-production at Netflix. Shane Black also has a film in pre-production, ‘Doc Savage’, with Dwayne Johnson attached to star.