Review: Elle Fanning’s ‘The Great’ Inspired by Female Leader on Hulu is The No. 1 Show 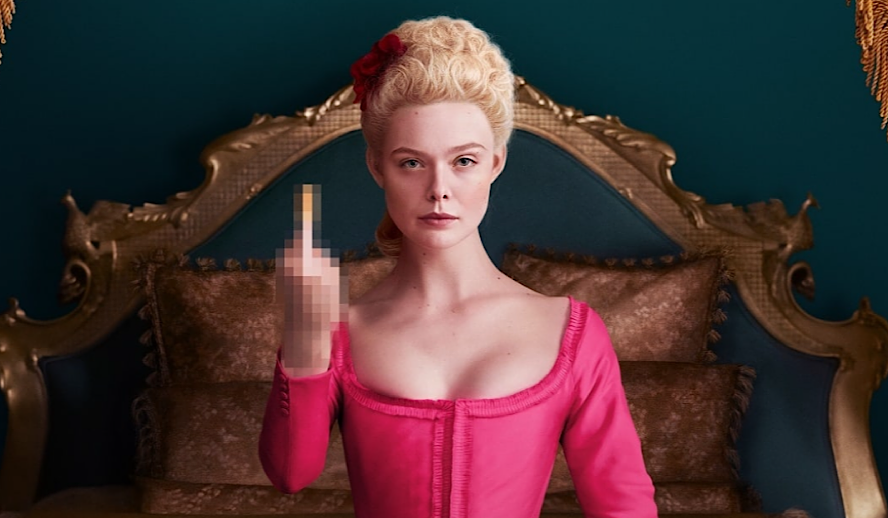 With the release of The Favourite back in 2018 came the discovery of a niche audience. An audience that was drawn to raunchy yet sophisticated dialogue and twists on classic period pieces. On this newly discovered cinematic stage, The Great made its appearance, continuing the new tradition of pushing boundaries in regard to the depiction of prominent historical figures. In fact, the co-writer of The Favourite, Tony McNamara, can be thanked for the creation of this new marvel. Although it shares a myriad of similarities with its inspiration, The Great is a unique creation that exemplifies the success of groundbreaking new ideas and the immense appeal of streaming content. Starring Elle Fanning and Nicholas Hoult, this show is a must-watch.

Pitched to viewers everywhere as “an occasionally true story,” The Great prides itself on the liberties it takes with historical facts. While other shows such as The Tudors, Reign, and The Crown have undoubtedly twisted history to amp up the drama, they did so in a serious manner, maintaining a somber tone throughout. By breaking free of these restraints, The Great was able to unabashedly move forward with an extremely comedic and raunchy portrayal of Catherine the Great prior to her bloodless coup and subsequent rule over Russia. As we watch Catherine find her footing in a Russian court that seems almost alien to her, we become enmeshed in an unfolding narrative that intertwines with and deviates from the history we know of this great ruler of Russia.

A Blend of Comedy and Drama

While ridicule and sexual comedy abound, there is an undercurrent of danger and drama that adds depth to both the plot and characters. The Great balances on the line between slapstick comedy and period drama; a feat no one could have imagined. By channeling aspects of different genres, the refined final product is a genre-bending masterpiece.

In our constant quest for labels in all aspects of life, we cling to genres in order to define modes of content. And yet, while labels are useful in many aspects of life, we must also be open to expanding, melding, and bending them. The Great, as a thrilling new addition to the cinematic narrative which bends the traditional genres we might hope to ascribe to it: comedy and drama. Not quite fully a comedy and yet not fully a drama, The Great defies molds into which we may try to stuff it, just as it defies our expectations in the best of ways.

A Cast that Dazzles in The Great

Not only does The Great break conventional rules of period pieces in regard to tone, it also embraces the diversity of our world that can often be found lacking in television. Further, differences in race and sexuality are often ignored in period pieces due to the belief that this diversity is a new aspect of life. This was not the case, and The Great was able to diversify the cast and touch on more modern topics by embracing its ahistorical narrative.

Prominent character, Count Orlo is played by Sacha Dhawan who is of Indian descent, and Aunt Elizabeth, a strong female voice throughout, is played by Belinda Bromilow who brings a level of elegance and madness to a character who breaks boundaries both in the bedroom and in court. In a way, The Great is also being true to facts by casting a wide array of ethnicities and sexuality, as the Russian empire extends over a vast region with multiple races co-existing and diverse sexuality is as old as humans itself.

And of course, the main draw and backbone of the show is Catherine herself, played by Elle Fanning. With acerbic remarks laced in dramatic irony, Fanning paints a vivid and contemporary portrait of a young Catherine destined for greatness. Catherine serves as a strong female lead, with poise and cunning, emboldened and enriched by the very femininity that is so often deemed a hindrance, especially in female leaders.

Femininity as a Weapon

While women are so often diminished as overly emotional, reckless, or romantic, Fanning’s portrayal of Catherine embraces all of these aspects of femininity to her own advantage. Instead of femininity becoming her downfall, Catherine’s empathy, charm, and romanticism serve as tools for her climb to prominence. This contrasts with the multiple male presences that dominate and surround her, providing an excellent slate with which to display female empowerment.

Particularly through Catherine’s maid, Marial played by Phoebe Fox, we see weaponized femininity. Even though she is a woman in a male-centric society as well as a servant amid nobility, Marial faces life with stoic resolve and unapologetic rhetoric. Through an abundance of female characters, all of whom are well-developed and clever, we delve into the complexity that was life as a woman in 18th century Russia.

History can be extremely boring and dull, as anyone who has ever read a history textbook can attest. While it holds kernels of gems that prove intriguing, they may not be enough to make us pick up a textbook and read for hours about dull politics. By piquing our interest surrounding Catherine the Great, we can revisit the past in ways that help influence our lives today. Whether The Great is simply a means through which we may entertain ourselves or a stepping stone to the rife historical world that lies within our grasp, it is a remarkable new addition to television that is simply great.