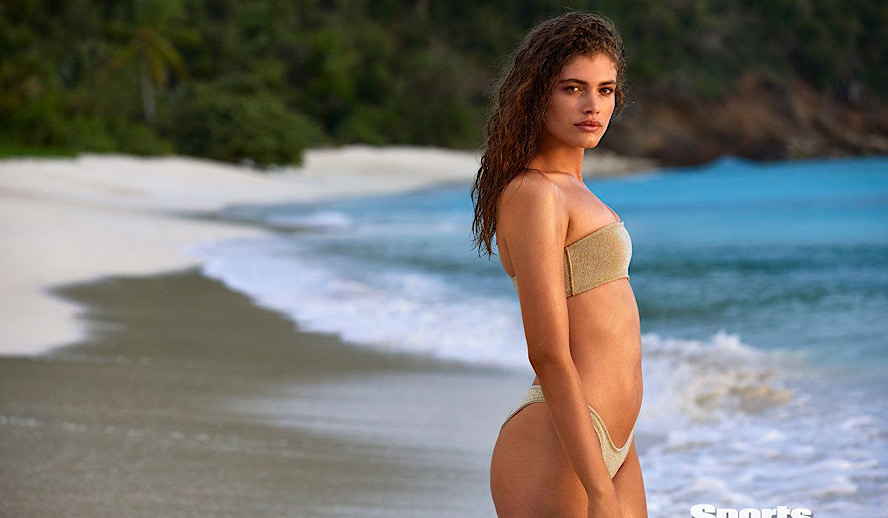 Valentina Sampaio has broken ground by becoming the first openly transgender model to appear on the pages of Sports Illustrated’s Swimsuit Issue. The 23-year old Brazilian model was selected along with seven others to appear in the 2020 issue, which will be released on July 21.

“I am excited and honored to be part of the iconic Sports Illustrated Swimsuit Issue,” Sampaio said in a personal essay for SI. “The team at SI has created yet another groundbreaking issue by bringing together a diverse set of multitalented, beautiful women in a creative and dignified way.”

Back in 2017, Sampaio also made history as the first transgender model to grace the cover of an edition of Vogue Paris. Last year, a short video about her, produced by L’Oréal, was released on International Women’s Day, leading to her becoming one of the brand’s ambassadors.

In her essay for the magazine, Sampaio pointed out the hardships she has faced throughout her life as a trans woman. “Being trans usually means facing closed doors to peoples’ hearts and minds,” she wrote. “We face snickers, insults, fearful reactions and physical violations just for existing. Our options for growing up in a loving and accepting family, having a fruitful experience at school or finding dignified work are unimaginably limited and challenging.”

She additionally discussed her upbringing in a country notorious for violence against the transgender community, sharing, “I was born trans in a remote, humble fishing village in northern Brazil. Brazil is a beautiful country, but it also hosts the highest number of violent crimes and murders against the trans community in the world—three times that of the U.S. I recognize that I am one of the fortunate ones, and my intention is to honor that as best I can.”

Sampaio’s history of activism within the LGBTQ+ community was what put her on the radar of MJ Day, the editor-in-chief of Sports Illustrated Swimsuit. Day has been a large advocate for inclusivity within the issue, especially in recent years. Under her eye, the magazine featured Ashley Graham, its first plus-size model, on the cover of the 2016 issue, and in last year’s issue displayed Halima Aden, a Somali-American model, who became the first woman to wear a hijab and burkini in the magazine. Sampaio’s hire was another positive step, as trans visibility continues to increase, with recent ad campaigns from companies such as Calvin Klein, Gap, H&M, Dove and Gillette having featured transgender people over the past few years.

“Our goal in selecting who we feature is centered around identifying some of the most inspiring, interesting, and multidimensional women that we can find,” Day said. “We are deeply moved that Valentina was willing to put her trust in us. We didn’t think twice about wanting to amplify her voice and message and give her a platform to advocate from on behalf of her personal aspirations and the trans community.”

Sampaio’s inclusion in SI’s 2020 Swimsuit Issue is a positive step among larger-scale advocacy for transgender rights during a presidency that is determined to take them away. The transgender community recently celebrated a victory, as the Supreme Court recently ruled that the 1964 Civil Rights Act protects gay, lesbian, and transgender employees from workplace discrimination on the basis of sexual orientation and gender identity. But despite this, the Trump administration has been cracking down hard against the marginalized group, urging the court to rule against the protection of gay and transgender workers, while previously barring most transgender people from serving in the military.

Lawmakers in over two dozen states have additionally been introducing measures that would strip away transgender rights, including criminalizing medical professionals who prescribe hormone therapy to transgender minors and banning transgender athletes from sports teams. The Department of Health and Human Services additionally finalized a regulation on June 12 – right in the middle of Pride Month and a pandemic – that undid protections for transgender patients against discrimination in healthcare from doctors, hospitals, and health insurance companies.

In the U.S., the trans community continues to face a brutal series of hurtful actions at the hands of conservative proponents of bills that work to take away the protections of LGBTQ+ people. As for Brazil, trans rights are nearly almost non-existent. According to the Trans Murder Monitoring Project, it is ranked the number one country for murders of trans people, with 129 trans people being killed last year. “We have never had a respectful place in society,” Sampaio said to Vogue in June. “Much like in the United States and across the globe, transgender people in Brazil are marginalized. We are seen as immoral and labeled as ‘something’ perverted, widely insulted, publicly beaten, and in some cases murdered.”

Sports Illustrated’s decision is a highlight and another step in the right direction among the rampant prejudice against the trans community.

“Thank you SI for seeing and respecting me as I truly am,” Sampaio expressed to the magazine. “For understanding that more than anything, I am human. Thank you for supporting me in continuing to spread a message of love, compassion and unity for ALL.”

We, at Hollywood Insider, congratulate Valentina Sampaio for all her success and the doors it has opened for Trans Women and Trans Men all over the world. Valentina, women are powerful and we are glad you are celebrating your womanhood in every way possible. believe in respecting and seeing people according to their own self-identity. Each individual has the right to live their life and tell their OWN story through their OWN perspective. Trans-women are simply WOMEN. Trans-men are simply MEN. We are MORE than just our physical features. We see each and every one of you and respect you for it. LGBTQ humans are completely natural and normal as hundreds of species in the animal kingdom are a part of the LGBTQ spectrum – thus it is just NATURAL. Humans in all our variety are nature, we are not separate from nature. We are here for you all of our brothers and sisters. And that we say with PRIDE!