‘The Starling’: After Suffering a Devastating Loss a Woman Finds Hope and Love Again in the Most Unusual Way 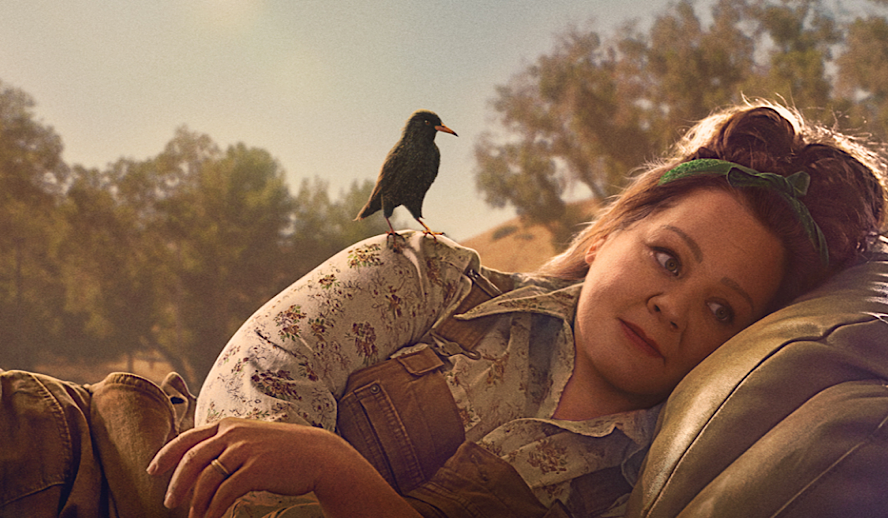 When we suffer loss or bad news, it can sometimes feel like there’s no way to continue with our everyday life, and it can feel like a burden to even try to be “normal.” ‘The Starling’ took on these feelings, wrapped them up, and threw a bird in the mix, a starling, to be exact. You might be wondering what a starling is; well, I definitely was; it’s actually a cute tiny bird which we will see all throughout ‘The Starling,’ but you should Google what it looks like right now; they’re super cute. After the devastating loss of their unborn child, wife Lilly Maynard (Melissa McCarthy) and husband Jack Maynard (Chris O’Dowd) both find themselves grieving in different ways, one more unusual than the other.

At the loss of their child, Jack and Lilly find themselves trying to cope in whatever ways possible, which ends up leading Jack to leave home for a while for emotional help and Lilly taking the opposite route and trying to go on with their normal life, both just as challenging. We see flashes of both of their now seemingly separate lives and their different journeys in trying to cope with their loss. Most importantly, ‘The Starling’ offers a realistic look into the challenges of grieving a loss and, more specifically, the loss of an unborn child. You can check out ‘The Starling’ on Netflix on September 24.

The starling is more symbolic than anything in the ‘The Starling,’ which I think is a fascinating way to tell this kind of story. As Lilly continues to go through her journey of loss, the people around her notice that she definitely is still feeling completely lost, which brings her to get recommended to a therapist. She finds the therapist, Larry (Kevin Kline), but quickly learns the man is no longer a therapist but rather a veterinarian after retiring from his therapy practice ten years prior. At this moment, you would probably think their new friendship was quickly over, but instead, they become best friends and learn things from each other about loss and grieving.

The trailer makes it seem like Larry acts more as a mentor or therapist, but they both learn things from each other throughout their new friendship, which adds to the emotional side of the film. I also think it’s super evident and symbolic that Larry left therapy for the animal world, and Lilly also has her own learning moments from an animal. Everything about ‘The Starling’ is unusual. Still, I think that is what makes it so great because, in the end, realistically, there is nothing usual or typical about the grieving process, and it’s different for everyone.

Seemingly, Lilly’s biggest takeaways are related to the starling that takes over her lawn and terrorizes her throughout the film. Larry walks Lilly throughout the grieving process in the trailer for the film, and it somehow aligns with the nesting habits of the starling bird. We see Lilly take on the barriers that were stopping her from progressing in her grieving journey, such as taking down the nursery once meant for their child. In some ways, Lilly finds herself relating to the starling, and by the end of the trailer, we see the starling peacefully flying out of Lilly’s hand, also revealing a new friendship.

Friendship holds a prominent spot in this film as we watch Jack find community while he seeks emotional help, Lilly and Larry create an unlikely bond, and Lilly and the bird come to understand each other. It is not clear from the trailer, but it kind of seems like the creators of the film wanted to show that sometimes all you need is a friend or that friendship is often found in the most unlikely places. Once again, nodding at how the film, and life, are full of the most unusual moments, people, things, etc.

As mentioned above, Melissa McCarthy does not often take on more emotional and dramatic roles in films, so this is also a highlight of ‘The Starling.’ Don’t get me wrong, I think this film would definitely have its comedic side, but it will be interesting to watch Melissa take on this type of role and give it her own comedic twist. Though the film is about both Lilly and Jack’s grieving process, it is clear Lilly’s journey will bring the unusual aspects of this film, and Jack’s will bring what would be expected of this film. I think it is a creative and unique way to tell a story about grief, and it is also another nod that grief is different for everybody.

Taking on such an essential role within a story as such must be challenging. Melissa McCarthy and Chris O’Dowd are both parents in real life so I imagine taking on these roles as fictional parents who have lost a child was extremely emotional and helped guide them through their roles throughout the film. I am excited to see how Lilly and Jack learn from each other in the end when I would assume they are reunited and both teach each other the things they have learned about life and grief.

Overall, viewers who decide to check out ‘The Starling’ will definitely walk away from the film emotional, of course, but also having learned something about grief and life. I think the film will help us recognize that happiness can be found in the most bizarre ways and that not one person’s grieving process looks the same. I am excited to see Melissa McCarthy take on this role, but even more excited to see what will come for Lilly and Jack.