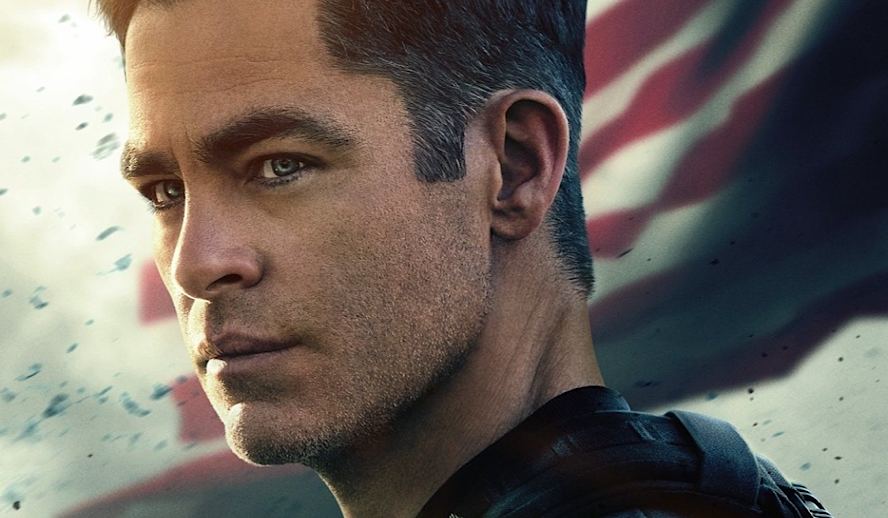 Chris Pine is among the biggest yet most underrated actors in Hollywood. It’s likely that you’ve seen some of his work, from his voice work in ‘Spider-Man: Into the Spiderverse’ to his long career as Captain Kirk on ‘Star Trek’. Although he has an expansive and critically acclaimed filmography, he tends to lurk in the background when it comes to the Hollywood Chrises (notably alongside Chris Pratt, Evans, and Hemsworth). This may be because he is yet to dawn a superhero suit or appear in the MCU, but this isn’t to say he deserves any less recognition.

Chris Pine shines in ‘The Contractor’ as he brings out a gritter side of his acting chops that we don’t see as frequently. He’s in good company, too, alongside Gillian Jacobs of ‘Community’ fame and Ben Foster, who had already starred alongside Pine in ‘Hell or High Water’. Pine and the rest of the strong cast bring strong emotion to ‘The Contractor’ as they tackle heavy themes like losing faith and the realities of the American Dream.

‘The Contractor’ – A High Stakes Premise

‘The Contractor’ opens with Pine’s James Harper getting dishonorably discharged from the United States Army after his bloodwork showed he had been taking unauthorized medications. While this may seem like a bad foot for a protagonist to get off on, the film makes sure we remember that Harper is a good man. He goes home, spends time with his wife, and bonds with his young son. However, as bills pile up he realizes he can’t be a stay-at-home dad forever, so when a former Army buddy of his, Mike (Ben Foster) offers him some high-paying work he accepts. He promises his wife that he’s staying safe and sets out for Berlin.

Of course, his work in Berlin is far from safe. Kicked out of the US Military, Harper finds work in an off-the-books militia. The group is composed primarily of fellow veterans, all using their military training for acts that are less than legal. Their leader is Rusty, played by Keifer Sutherland, and anyone who has seen Sutherland’s work knows that this means trouble for Harper. Harper and the crew complete job after job, losing men and taking bullets along the way. Things only get worse as everyone Harper talks to insists he’ll never be able to go home to his family again.

The problem with an off-the-books, highly illegal, pseudo-military mission is that you can’t exactly freely reveal the details, goals, or plans. As Harper involves himself with Mike and Rusty’s crew, we as the audience don’t know much about what he’s getting himself into. We want Harper to succeed, as we know his motivations for the mission (providing for his family) are pure, but the air of secrecy surrounding the plans makes them seem highly dangerous; And that’s exactly what they are. We gain exposition as Harper moves from one mission to the next, tying loose ends and cleaning up after their previous crimes.

As the film progresses, it’s clear that Harper doesn’t have the full story either. He rushed into this line of work so quickly that he never fully understood what he was setting out to do. He was constantly misled and misinformed, acting on commands before he took action and began acting on self-preservation. The audience and Harper are in the same boat, we want Harper to distance himself from whatever mission is coming next but we also need to figure out what exactly is going on.

When a film’s protagonist is constantly taking lives and views the law as a mere suggestion, it can be hard to root for them. In these cases, it’s important to give them sympathetic motivations, the viewer may not agree with the character’s actions, but they can at least understand why the character is going through with them. Often this is in regards to supporting loved ones or keeping themself safe, concepts that the general public can understand and relate to. This is where ‘The Contractor’ shines, balancing moral conflicts with thematic sympathy.

When Harper sets out to work with Mike and Rusty, he knows that he’s getting himself into serious trouble (one doesn’t file a serial number off of a gun unless that gun is being used for unsavory purposes). Still, as an audience, we can understand why he took the job. His family is struggling, he’s out of work and needs to provide. He received fifty-thousand dollars just for agreeing to be part of the mission, he just couldn’t turn down that money. After he began the mission, he was forced to carry on, needing to protect himself in order to eventually return home. Harper makes the “right” choices infrequently throughout the film, but each poor decision is met with sympathetic reasoning.

Adding to the strong themes is the role of faith throughout the film. Harper’s relationship with his faith and religion shifts dramatically as he goes from a father and a soldier to a mercenary with far too much blood on his hands. The faith-related motifs seen from beginning to end add an element of greater emotion and humanity to Harper and the rest of the story.

In Summary: Highs and Lows

The cast of ‘The Contractor’ is incredibly strong. Don’t let the domination of the Marvel Chrises fool you, Chris Pine is a fantastic actor and deserves increased recognition. His gritty, unyielding performance carries the action-heavy plot. Gillian Jacobs is not in the film a ton, but her role as the concerned, essentially single mother does not suffer from a lack of screen time. The high amounts of chemistry between Ben Foster and Pine make it unsurprising that they’ve previously worked together.

The biggest fault in the film is its repetitiveness. Going from one black ops mission to the next can suffer from an overwhelming feeling of sameness, especially when the audience isn’t clued in to the full picture. However, if you’re an action fan, you’ll likely see no problems with the number of fight scenes and shootouts in such close vicinity.