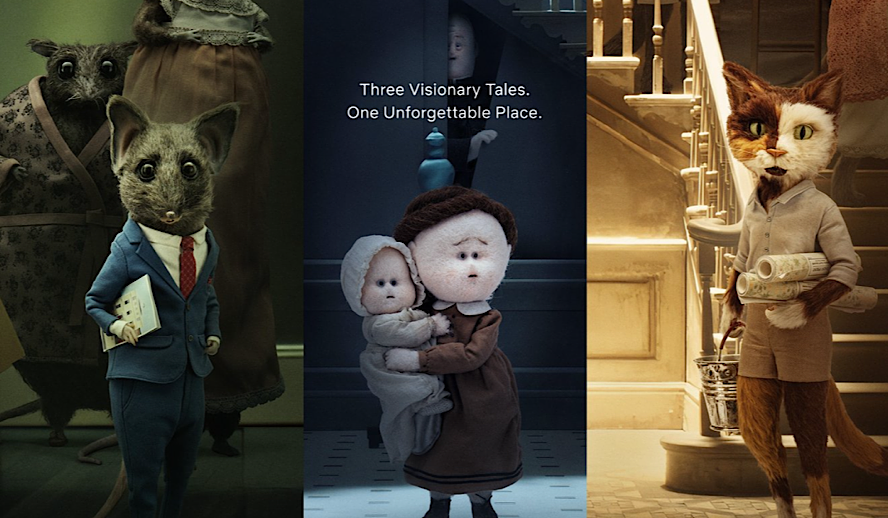 The world of ‘Coraline’ was creepy when watching as a kid, especially when the Other Mother made her appearance. Even the Oogie Boogie Man from ‘The Nightmare Before Christmas’ scared me as a kid because he was made out of bugs. However, as I got older, I started to appreciate stop-motion films more because of the length of time it takes and how precise the animators have to be when moving the characters. Therefore, when Netflix announced the stop-motion adult animation film, I was thrilled but I truly didn’t know what I was going into.

‘The House’ on Netflix’s description is “Across different eras, a poor family, an anxious developer and a fed-up landlady become tied to the same mysterious house in this animated dark comedy”, and going into it, I was expected to laugh a bit but it’s not a comedy! Dark for sure but it should be labeled as a mystery. Since Netflix is releasing more animation catered towards adults, parents need to read the genres and watch the trailer instead of just judging by the cover photo. ‘The House’ cover photo currently is a cute cat and if a parent were to just turn on the show because it looks like a children’s show, their kids will have nightmares.

Part 1: And Heard Within a Lie is Spun

‘The House’ made by Nexus Studios, is a film in three parts and the first part is titled “And Heard within A Lie is Spun” directed by Emma de Swaef and Marc James Roels is about a poor family who gets a new house. This part of the film is the most unsettling because of the mystery/thriller element. The family is made of 4 people, Raymond the father (Matthew Goode), Penny the mother (Claudie Blakley), Mabel the eldest daughter (Mia Goth), and Isobel the baby. The story opens up with the family preparing for guests, the character’s faces have a mushy felt-like fabric look to them looking like classic creepy dolls.

This story takes place in the 1800s, and Raymond meets a mysterious architect named Vanschoonbeek in the woods that gives him the house. The family is moved straight into the house after Raymond signs the agreement. Things start to get weird right away, from the workers in the house glares and the way the parents start to get hypnotized right away. The story then focuses on Mabel as she explores the house with her sister Isobel. The mystery factor kicks up as the story continues and my mind is racing trying to figure out what’s wrong with the house. This part has the best cinematography and visuals, it helped give that ominous tone it was going for. It also has the best conclusion compared to the other two parts, it doesn’t leave you in a confused state like the other two. As a result, this part sets up the other two parts really well.

Part 2: Then Lost is Truth that Can’t be Won

This part is set in the present day and is directed by Niki Lindroth von Bahr. The main character is an anthropomorphic rat who is a contractor (Jarvis Cocker) trying to sell a house until an odd couple overstays their welcome. If you have a fear of bugs, then this part isn’t for you. The contractor is renovating the same house the family moved into and you can tell that this is the same house because of the layout. However, the contractor discovers an infestation of fur beetles inside and he must remove them before the open house. Even in stop-motion animation, the bugs are gross and creepy when they scurry around the house and swarm food. This part isn’t as unsettling as the first part unless you hate bugs but the mystery is still there.

There are Easter eggs in the previous part that you can miss if you’re not paying attention or if you don’t have the subtitles on. For example, there’s a baby rat that is crying, and in the subtitles, it says her name is Isobel, the same as the baby in the first part. One thing this part doesn’t do is give you the name of the contractor and the odd couple. I think it gives this part more of a mysterious factor because as the viewer, you’re trying to figure out who these rats are and why they’re acting so strangely. This part is the most surreal mostly because of scenes like the bugs dancing and singing. The ending is unsettling and it leaves you with more questions than you started with. If I wanted a part to get extended, this will be the one because of all the questions I have!

Now here’s the fun part, read all the part’s title’s together and it rhymes! What I noticed is the titles make sense after you watch each part and understand the character’s themes and motivations. The final part titled “Listen Again and Seek the Sun” is directed by Paloma Baeza and is about an anthropomorphic calico cat named Rosa (Susan Wokoma) and her tenants. This is set in the future where apocalyptic flooding is surrounding the house and Rosa is trying to renovate the house for future tenants.  This part has a different tone than the previous part, the only mystery is the flood and none of the characters are odd or creepy.

Rosa is the stubborn main character by tries to fix the house and ignores the friendships happening around her. The tenants’ personalities really shine in this part compared to the others. For example, my favorite character is Jen (Helena Bonham Carter), a gray cat who is into spirituality. She brings the positive vibe this film needs after all the creepy stuff happening. I really liked the design of the character’s rooms and clothing, it shows matches their personality. The conclusion of this part is cute, rewarding and it leaves you feeling happy. It was a nice way to wrap up the film.

Part 4: Finally This Review is Done

My final thought about this film is that the animation is imaginative and enjoyable to watch. In the parts with the anthropomorphic animals, I liked that they showed their animal traits like the contractor eating like a rat and Rosa being nimble like a cat. It would be easy to get them to behave like humans and it shows how much the animators paid attention to detail. I think each part would’ve been stronger if given a standalone episode so the directors could’ve portrayed their ideas better to the audience. In conclusion, if you’re a fan of stop-motion animation and love a good mystery this film is for you!