‘Copshop’: A Hitman, a Conman, and a Rookie 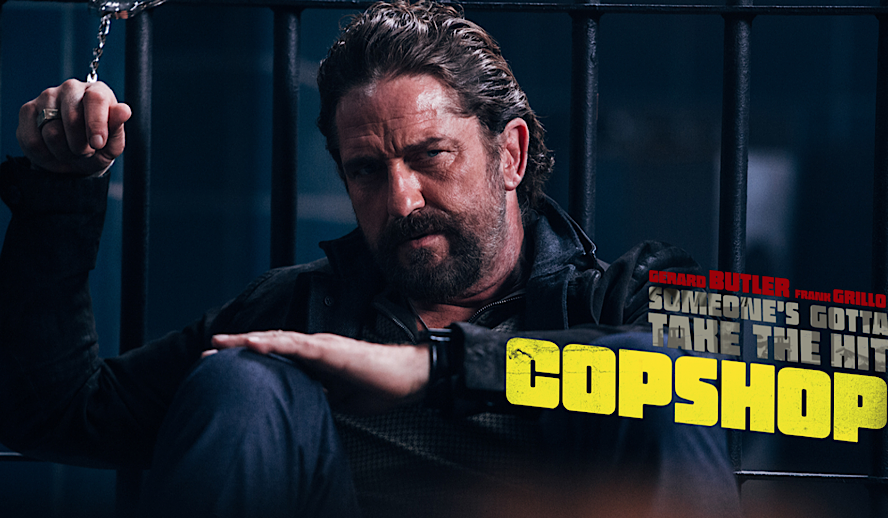 An Ensemble of Deception and Badassery

Valerie Young is a casually cool rookie cop with a gleaming silver revolver, and one night, her isolated police station is graced with the presence of Teddy Murretto. Con-man and frequent law-skirter, Murretto is wanted by more than the police. He’s being relentlessly pursued by the steely and maniacal Bob Viddick, a murderer for hire who is not only getting financially compensated but takes pleasure in the hunt of the manipulative Murretto.

Young’s ability and instinct are put to the test as the station is infiltrated and brutally compromised by more than just our original criminal duo, but other violent characters who are pursuing the walking bounty that is Teddy Murretto. Caught within the blazing crossfire of these various opposing forces, Young is forced to connect with her unlikely peers as time ticks away, and what emerges is a story fraught with gunfire, corruption, and broken promises.

‘Copshop’ is an exercise in truth and deception, in deciding who is and isn’t being honest when drawn between the conflicting missions of various cunning malefactors. Alexis Louder as rookie cop and trusted good guy, Valerie, is our vessel into the respective criminal underworlds of our two other characters, Gerald Butler in the role of hit-man Bob Viddick and Frank Grillo as the man-bunned con-man Teddy Murretto. Viddick proceeds with the sort of subdued tenacity that Butler does so well, balancing well-developed determination and assuredness with bouts of mania and pure badassery. Grillo seems to skid into frame, quick on his feet – like a good con-man ought to be – and he’s got more criminal charges than fingers and toes. They’re an intriguing match, psychologically facing off in their opposing cells as fate creeps closer and closer, both men desperate to achieve their goals. There’s merit to this relationship, and I found myself questioning who to trust among these deeply untrustworthy characters.

Louder shines with the natural talent and expected provenance of our moralistic cop character, simultaneously desperate to serve and desperate to do right by the law and her own internal code of ethics. She’s tough, charming, and gives the sense that despite the short time we spend with her, there’s an entire character beyond this archetypal persona. In a film filled with dirtbag badassery, she’s a light of faith shining through; a character that we can tether ourselves to in a film that explores these violent characters possessed by the intoxicating tunnel vision of murder and survival.

A stunning hidden performance emerges from parallel hit-man psychopath Anthony Lamb played by Toby Huss. His jovial, southern-accented insanity is a much appreciated contrast among Butler’s focused stoicism and Grillo’s confused, manipulative charm, and he crafts an intriguing wild-card among the already established ensemble of good guys and bad guys. He’s way beyond weird and he loves to kill, is there a more terrifying combination?

This film earned an R-rating and leaned into it in a way more than I was expecting, with some truly painful moments that landed with a collective ‘Oof!’ rather than with the familiar desensitization that comes with an ever-increasing death toll. Where this film lacks in complexity and thoughtfulness of writing, it makes up for in explosions and bloodshed; in this situation, I’d call it a fair enough trade.

An Action Romp With Much-Appreciated Tension

A surprising action romp that isn’t afraid – as is a signature of throwaway films in this genre – to dedicate itself to building suspense, to take a moment – marinate in it – and then push things over the edge. Though the story itself is pretty basic, thrown together with a premise that could have come from a randomized, action-film idea generator, this works in the favor of the overall tone. With subtle self-awareness, a few cringey jokes, and a positive attitude, this film leans into the pulpy undertones that permeate the entire experience, and I think it really works.

All in all, ‘Copshop’ isn’t making any new, innovative statements on the genre, but at least it makes an effort to do this action-thriller premise justice in the ways that really matter. While the draw might lie in Gerard Butler chasing Frank Grillo around a deteriorating police station, real substance blooms from Louder and her performance which flawlessly combats their jaded grit with a mixture of self-assured snarkiness and warmth that guides us through this weaving story. The film has an astute sense of pace in moments of high tension, and this attentiveness resulted in an experience full of little pay-offs that made this experience stand out against the background of a somewhat mediocre narrative.

Though it loses itself around the very sequel-teasing ending, unable to navigate the final moments which finish off the past hour and half of tension and mistrust, it doesn’t cheapen the time we spend with characters that you really come somewhere near caring about in this sea of revenge and violence, despite their shortcomings. This film is dark, energetic, competent, and most importantly, a genuinely good time.

Audiences can look forward to seeing these stars in various films this coming year. Gerard Butler is starring in the upcoming mystery thriller film ‘Hair of the Dog’ alongside Bruce Willis, set to release this November. Frank Grillo is also starring in a thriller titled ‘The Yacht’ that is expected to be released this year; his co-stars include Ruby Rose and Patrick Schwarzenegger. Last but certainly not least, Alexis Louder is set to star in a TV drama series premiering next year titled ‘The Terminal List’.