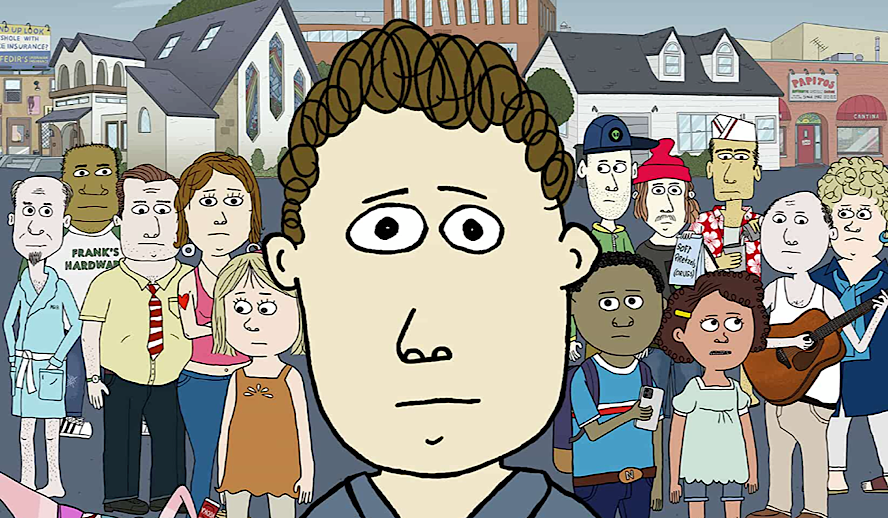 About Kids But Not For Kids

‘Ten Year Old Tom’ is exactly what the title promises. The series follows Tom (Steve Dildarian), a ten-year-old boy, as he deals with the troubled adults that surround him. Tom is remarkably average, neither smart nor stupid. He can’t do a pull-up and he poops his pants during little league games. One can’t deny that Tom is a bit of an awkward mess. Joining him on his adventures are his friends, the future CEO Nelson (Byron Bowers), and Dakota (Gillian Jacobs), whose mother (Jennifer Coolidge) forbids her from hanging out with Tom. While Tom has typical childhood misadventures with his friends, they soon escalate to ridiculous levels thanks to the misguidance of the adults in the town. While the series focuses on kids, the show is definitely not for children.

Much of the humor of ‘Ten Year Old Tom’ comes from how adult the series is, especially the misadventures that Tom lands into. The series could have easily just had the type of humor that can best be described as “isn’t it funny to see kids talk about sex” but the series avoids this for a more mature style of humor. In one of the funniest episodes, Tom realizes that his family is “poor” so he and Nelson start a GoFundMe to earn enough money for ice cream. After earning more money than they know what to do with the two buy an ice cream truck because, as Nelson says, “we’re kids, it’s not embezzlement, it’s summer misadventures”. The episode is a hilarious look at the money problems that adults face but from a child’s perspective.

Not All Adults Are Role Models

It’s a common theme that Tom, similarly to Tim in Dildarian’s first series, is just an average joe who happens to get into morally wrong adventures thanks to the people he surrounds himself with. He’s a sincere guy, despite the antics he gets caught up in. Much of these crazy antics are actually caused by the adults in Tom’s life, from his scheming principal (Todd Glass) to his emotionally intense teacher (John Malkovich).

Many episodes either follow Tom as he becomes a pawn in an adult’s scheme, like rigging the spelling bee, or follow Tom as an adult offers their misguided help, like when the stoner bus driver (Ben Rodgers) sells Tom steroids before the big little league game. These episodes are some of the funniest since they play with the idea of adults being imperfect. Children see all adults as perfect role models despite this being far from the truth. Adults are people and, despite what children think, adults are complicated and flawed. ‘Ten Year Old Tom’ exposes the imperfection and misery of humans from a child’s perspective. Tom often catches adults at their lowest point or worse, adding to a lot of the heart of the series, with Tom either trying to help them or just offering an ear to listen.

‘Ten Year Old Tom’ is a deadpan comedy, where much of the comedy relies on Dildarian’s deadpan delivery. This works so well for the character of Tom, with his deadpan nature perfectly encompassing his awkward persona. The series’ deadpan humor helps make the dialogue soar, with many jokes landing really well thanks to the actor’s dryness over the absurdity of the situations. Despite the series being so deadpan, the humor never comes off as too sarcastic or insincere. The humor, while being dry, really is focused on the awkward situations these characters get themselves into, making the audience both cringe and feel sympathy for Tom.

Each episode consists of two fifteen-minute segments. While the series has a continuity, they are more episodic in nature with the exception of some character threads. This all makes the series very easy to binge, with each segment acting more like a short film. The fifteen-minute run time also causes the pacing to be more fast-paced, with some episodes building to intense chaos, such as the episode where Tom “breaks his neck”, while other episodes end with a strong punchline (“the Latin spelling of Tom is T-H-O-M”).

One of the strengths of ‘Ten Year Old Tom’ is the performance. The all-star voice cast is made up of both comedians and even A-list actors, like John Malkovich, who chews up just as much scenery as to be expected. There are lots of guest stars throughout the first season, with one of the best being ‘What We Do in the Shadows’ ‘ Mark Proksch, playing Dakota’s father who is unhappy in her marriage and deeply abides by the “bro code”. His character is perhaps one of the most pathetic on the show, adding more to the idea of the imperfection of adults. Like ‘the Life and Times of Tim’, Steve Dildarian is a standout as the lead role, with a lot of the jokes landing so well because of his monotone delivery. There is also something inherently funny about a ten-year-old who has the monotone attitude of a tired adult.