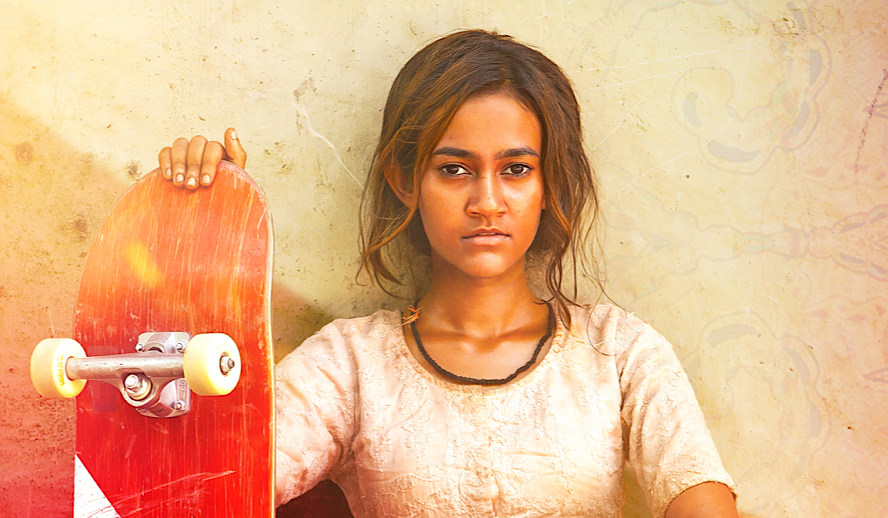 The term “skater girl” has a very specific image attached to it: Avril Lavigne inspired colorful highlights, baggy clothes, beanies, and the inevitable checkered Vans. Of course, Manjari Makijany was fully aware of this skater girl look, and knew full well she was blatantly subverting expectations when she was naming her heartfelt story about an Indian village girl who comes alive and finds purpose through the sport.

‘Skater Girl’ stars Rachel Saanchita Gupta as Prerna (who looks no more than sixteen) a girl from a village in Rajasthan, India. The uber-traditional mindset of her parents and most of the village is all she has ever known, that mindset being that the only way a girl can please her parents is by being a good wife to the husbands chosen for them. In comes Jessica, played by Amy Maghera, a half-Indian Brit from London visiting the village where her father was from for some soul searching. What she finds instead is Prerna who affectionately calls her Didi (elder sister.) Jessica is deeply touched by the lack of motivation and opportunity Prerna has to find her calling and purpose.

She put her privilege to good use, after seeing how much the village kids and Prerna in particular love skateboarding when they are accidentally exposed to it by an American teacher who is one of Jessica’s friends, she not only buys them all boards, but ventures to build a skate park in the village. In effect, the producers built one of India’s largest and Rajasthan state’s first fully functioning skate park. Today, the skate park serves around 50 kids daily for free workshops.

Her strict parents clash with Prerna every step of the way, but through skating, she finds something that is purely hers, her liberation is as clear and joyful as the smile on her face anytime she’s on a board. Prerna’s adorable and supportive sidekick/brother Ankush played by Shafin Patel, steals the show. Bollywood veteran, Waheeda Rehman makes an appearance as the rich patroness of the park. ‘Skater Girl’ is Manjari Makijany’s feature debut, having previously been successful in shorts. She’s got a clear cinematic eye, it’s no surprise she is credited as one of the cinematographers as well. Scenes of the village are brought to life through her wide shots, expositions, and the bright vibrant colors of Indian culture.

Not Just Another Teen Film

Although aimed at a younger audience, the film’s themes of family and tradition clashing with personal passions will no doubt remind viewers of those found in the teen classic ‘Bend it Like Beckham.’ Besides ‘Beckham’ though, there are so many sport-centered Disney Channel movies about a teenager torn between two forces and versions of themselves, usually manifesting in an extracurricular activity with the big event of both happening on the same day: basketball v. theatre, cooking v. baseball, figure skating v. hockey, competitive swimming v. being a merman, being a leprechaun v. a popular boy on the basketball team.

Thankfully, ‘Skater Girl’ may use a similar plotline, but it a meaningful film that provides food for thought for young audiences. Consider for example that the two events are the skateboarding championship where Prerna will finally have a chance to shine she had never had before and her wedding. Yup, wedding.

It doesn’t shy away from staying true to the harsh reality Prerna faces, a life where her voice doesn’t matter, where her father can take away her pet goat at any given moment for profit, and where she has zero say on who she has to spend the rest of her life with. We witness a girl who is being awakened to the fact that she is important, no Disney Channel original film can ever achieve the feeling of watching Prerna cry tears of joy as people applaud her 45-second showcase.

Keeping it Informative and Authentic

Makijany also succeeds at creating a sense of mature reality, for example by sticking with Hindi as the main language of the film but incorporating English well through different characters. She never has someone who wouldn’t actually speak English speak English. The film also illuminates on the caste system, a class system in rural India which although is not in official effect anymore, exists as a powerful but unspoken norm in villages like Prerna’s, dividing members of different classes in a hierarchical stratification that keeps water wells and relationships within each class.

The boy Prerna likes is from a higher caste than her, and unlike the heroes of other teen film counterparts, this girl of no more than 16 who has an innocent crush on a boy at school can’t simply slip a note in his locker, or hope he asks her to the dance. The best way to describe the ending is by saying that is deeply respectable, and the greatest showcase of Makijany’s desire to tell a true to life but inspiring story. This means an open-ended ending that neither confirms nor denies Prerna’s future. What’s important in the end is that Prerna has learned about herself and her worth, a lesson that cannot be revoked.

The film’s biggest flaw is in the fact that we lose sight of Prerna’s story for an extended interlude in the middle where Jessica’s efforts to make a skate park seem to take over. Of course, important for the plot, nevertheless Jessica’s storyline seems a bit too forced and artificial at times, in particular, a dialogue between her and her friend enters into Lifetime movie territory.

Overall, however, the film offers a bit of thoughtful and inspiring entertainment to a genre that is generally deluded to receptive stories, awful jokes, and fairy tale endings.